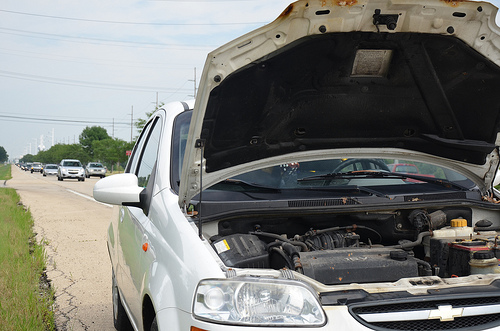 My car battery has died four times in my life, and two of these times have been when I was picking up someone from the airport. (I think my car is afraid of flying.) The car had taken longer to start than normal when I left for the grocery store, which was enough to make me think, “Geez, I hope the battery isn’t dying! Ha, ha!”

This is what we call foreshadowing.

However, I was unaware that I was in a blog entry and drove off instead because I had places to be, damn it. I still had places to be, and I needed to be at the airport in half an hour. Thankfully I had my cell phone with me, so I called AAA, but was told it could be 45 minutes to an hour before a truck arrived. I called my mom’s cell phone next to let her know I would be late. Unfortunately, my mother hardly ever uses her cell phone and evidently hadn’t set up her voicemail because the service wouldn’t let me leave a message. So, not only would I be late to pick her up, she might think I’d forgotten her, or worse, been in a horrible car wreck on the way to the airport.

Needless to say, I was kind of stressed out.

When I get stressed, my face turns bright red. It’s annoying and embarrassing and completely unavoidable. It also makes people silently freak out when I talk to them, their eyes slowly growing wider and wider, because they think they’ll be calling 911 in a few minutes when I inevitably keel over. Despite this, I went inside and asked the manager if anyone from the store would be able to give me a jump start. Unfortunately, he was the only manger on duty and couldn’t leave his post. When I let him know AAA told me it could be an hour, he told me he’d seen them arrive 5 or 10 minutes after a customer called. “Under promise. Over deliver,” he said. And it was with that succinct corporate-speak that I knew he was, indeed, a manager.

So I bought an overpriced bottle of water and went out to wait by my car. I also started socially profiling other customers to determine who would most likely be able to jump-start my car. The surprise? I am totally sexist! A middle-aged woman put away her groceries in the Volkswagen next to me and I didn’t say a peep to her. Another woman got into a sedan two spots down and I let her go without a word. Then a blue van pulled into the spot next to me and a guy about my age stepped out. It was at this moment that I got out of my car and asked, “Do you know how to jump-start a car?” So yes, when I am a damsel in distress I quickly revert to asking a man for help. I am not proud of this. The best part though? He totally knew how to jump-start a car! He used to work on cars! In conclusion, social profiling is morally wrong from a theoretical standpoint, but worked excellently in execution. Granted, maybe those ladies could have helped me too. I’ll never know.

My impromptu mechanic’s name was Kent, but it seemed more like Clark Kent because he was my Superman. We used the jumper cables my mom makes me keep in the trunk (thanks, Mom!) and jump-started that car in a jiffy without setting anything on fire or electrocuting ourselves! I thanked him with a hug, although a hug from a sweaty, red-faced girl was probably not the best reward. If I had to do it again, I would have waited for him to leave and then slipped a $5 bill hidden in a napkin under his windshield wipers. But my mind was too frazzled at that moment to think of that, so I cancelled the AAA service and drove off to the airport instead.

The weirdest thing? My arrival to the airport was so perfectly timed that I could never have managed it that way if I’d tried. My mom is old school and prefers that I park at the airport and walk into the terminal to meet her, but there was no way I was turning off that engine until I got home. I had just pulled into the arrivals area when my mom called and I explained our revised plans to her using several exclamation points. “My battery died! But I got a jump-start! I’m not stopping this car! Meet me outside!” She stepped on the escalator and met me outside within a minute.

So, all in all it went really well. The parking lot of a Harris Teeter is a pretty safe place to have a dead car battery. It sure beats having a dead battery in the short-term parking garage at the airport. The only other thing I’d do if this happened again would be to open my hood while I was waiting instead of just sitting in the car with the hood closed. I think opening the hood would have been like stringing up a banner that said, “HELP ME, PLEASE!!”

I learned three things from this experience:

1) It’s amazing how quickly you can become helpless
I think of myself as fairly independent. I work for myself, pay my own bills, and generally know how to handle things myself even if they don’t go my way. But once my battery died I literally became a damsel in distress. (A 32-year-old still qualifies as a damsel, right?) I really, really, really hate having to ask for help. Yes, I was able to handle the situation, but I was completely dependent on other people to solve the problem. I also take it for granted that I can travel where I want to when I want to 99% of the times, so that 1% of the time when I can’t is fairly disturbing, but makes me grateful for the other 99%.

2) I need to take better care of my car
My car battery was almost 5 years old, which is the age at which you should get it tested to see if it should be replaced. I’ve kept all my receipts over the years, so if I’d paid better attention I probably could have prevented this. I tend to rely on my mechanic to tell me when I need certain things checked, but I’ve only been using my local mechanic for two and a half years, so they don’t have records going back far enough to remind me about the battery. As a result, I’ve made a big spreadsheet of all the work I’ve had done on my car since I’ve owned it, which I can now refer to in the future.

3) I am more prejudiced than I would have previously thought
I do feel bad that I didn’t ask the women parked next to me for help. I dislike sexism, yet in this situation I was the sexist one. I even found myself wishing I looked more like a swimsuit model since I figured the hotter a woman is the more likely a man is to come to her aid. These are not thoughts that I enjoy having, yet they were the first ones that jumped to mind. I’m going to have to do some work in this area to overcome the prejudices I didn’t know I had.

I’ve got a new car battery now, and if I still own the same car in 5 years I will be sure to get the charge checked before I head to any airports!

Later: I am not the Jennette you are looking for
Earlier: Saving the world before bedtime…in the parking lot
Home: Main blog index