It’s not impossible that a stranger would tweet that they like me. Hell, a stranger once tweeted that they hated me. But my blog and book audience skews female, and it seemed unlikely that someone who appears to be a young, average-weight, male was a die-hard fan of Half-Assed. Upon closer inspection I realized he was actually spreading the word that @TooDopeAlexis likes me, but his profile presents him as a young male too, as well as a two-time TreeGameChamp (whatever the hell that is) who was surprisingly diligent in using the proper trademark symbol when setting his name to Spider-Man™. So again, not my typical fan. The whole thing reminded me of grade school when boys would make fun of each other by teasing that they liked the dorkiest girl on the playground-usually me!

Then there was this:

While it’s flattering to think that GabbiXxx is just, OMG, *gasp*, dying for me to follow her, pleez, pleez, pleez, I started to think something was up. After I got a third tweet that has since been deleted, I checked that user’s timeline and discovered they’d also sent a tweet to @jennettemccurdy. Puzzle solved. I had been confused with Jennette McCurdy, a blond, 20-something, Disney tween queen. This happens at the grocery store too. ALL. THE. TIME. 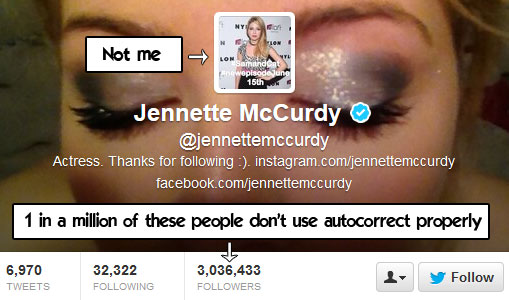 The real culprit here? Autocorrect, the prankster of the Internet, the Loki of the keyboard, the single best source of LOLs since I had a fourth grade teacher named Mrs. Horney. (This really happened. I don’t joke about LOLs.) Evidently if you use the official Twitter app for your mobile phone and start typing an @ reply, autocorrect tries to guess who you want to tweet. As you can see below, Jennette McCurdy and I are the top two choices because not many people spell “Jennette” the way we do. I’m not sure if I’m always the top choice, or if I’m just the top choice on my phone because it knows I’m logged in. I don’t know why my phone would think I want to tweet myself. I’m not that lonely, I swear. 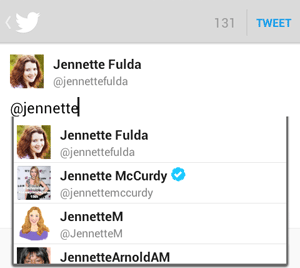 Jennette McCurdy has 3,000,000+ followers and 3 of them have incorrectly tweeted me, so that means one in a million of them don’t know how to use autocorrect. I suppose this is bound to happen again in the future. Not much I can do about it, other than change my Twitter name, which is not happening. All I can hope is that she never has an epic Amanda Bynes breakdown. God knows what kind of tweets I’d get then.

Later: The closest IKEA is in the parking lot
Earlier: Not the way I wanted to jump-start the weekend
Home: Main blog index