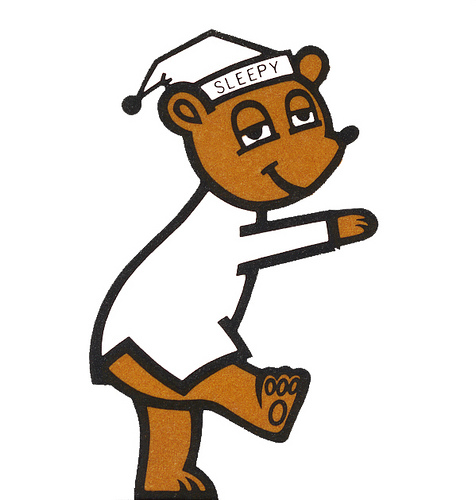 Photo by Roadsidepictures / by NC-ND 2.0 CC

I have never been blackout drunk, but I have a history of sleepwalking which is probably the next best thing. (The next worse thing?) Both involve doing weird shit that you have absolutely no memory of. You’re completely dependent on others to let you know what happened. And when there are no witnesses, you have to deduce what happened Sherlock-Holmes style by the clues around you.

For all I know, I might not sleepwalk at all and this is a lifelong prank my friends and family have pulled on me. Pssst! Tell Jennette she sleepwalked last night. It’ll be hilarious! I’ve lived alone for a total of 6 years of my life, so I could be sleepwalking every night and not know it. That cats aren’t talking, anyway. As best as I can tell, it’s fairly infrequent, but it does still happen. These are the five incidents I know of.

Age 7: My mother asks me if I remember coming downstairs the night before and trying to pee in the hallway because I thought it was the bathroom. I definitely do not remember this, and even if I did I probably wouldn’t fess up to it.

Age 9: I sleepwalk around the ground floor of our house one night and try to get out the back door, but my family stops me. This freaks my mother out because the door leads to our backyard which leads to a small hill which leads to a creek, which she would very much never like to find me dead in one morning. Door: Deadbolted. Me: Do not have the key.

Age 15: I wake up on the downstairs couch although I am absolutely certain I fell asleep in my bed upstairs. Also, my shirt is off, which is kind of freaky, but I have no history of sexual abuse so I must have taken it off myself. At least I didn’t pee in the hallway this time! This experience in particular gives me great sympathy for rape victims who wake up in a weird place after being roofied. I, fortunately, have never been assaulted. I just woke up in my own house without my shirt on, but that experience was disturbing enough on its own. I can’t imagine how horrible it would be to wake up naked on someone’s lawn and have no idea what had happened.

Age 18: In the dorm one night I sit up in bed and have an incoherent conversation with my roommate and then lie back down again. She didn’t room with me the next year, but I don’t think this is the reason why.

Age 32: I wake up and see my full-length mirror leaning against the bookcase instead of hanging on the wall several feet away. This happened last month and freaked me the fuck out. (Yes, the f-word is definitely necessary here.) The previous month I had temporarily put the mirror in the same place because contractors were replacing the heating unit on the adjacent wall and I didn’t want it to fall and break. However, I put it back afterwards and had no reason to move it since then. I temporarily entertained the idea that someone had broken into my apartment, moved the mirror, and then left as some sort of bizarre prank. But the sleepwalking thing seems more likely, even though I haven’t had an incident reported by a second party for many, many years.

Those are the five incidents I’m aware of. God only knows how many times I’ve actually sleepwalked, or if I’ve forgotten other incidents people have told me about. It’s disturbing when there are no witnesses to explain what happened to you. Otherwise, it’s just a funny story someone is telling at your expense.

It’s also unsettling to know what my body is capable of doing without me knowing about it. I like to think I am in control. But what is the “I” that I’m talking about when I say? It’s that consciousness and sense of self I have when I’m awake. It’s that awareness that vanishes into no place when I fall asleep and then appears magically again in the morning at a moment I can’t quite pinpoint. I never notice that exact moment when I turn off, like if I were to look too closely at it the awareness would startle me awake again.

Whatever consciousness is, I evidently don’t need it for my body to go on a joyride without me. It’s too bad I don’t do something more useful in my sleep, like run three miles on the treadmill or vacuum my car or scrub mildew out of the tub. Those are experiences I wouldn’t mind being unconscious for. It would make me such a lovely house guest too. I don’t snore and I’ll do your laundry while we sleep! I’m also disappointed that I’ve never seen someone else sleepwalk. All I’ve seen are news stories with night-vision video from sleep disorder centers, or movies and TV shows that depict people walking with their eyes closed and their arms straight out, which sleepwalkers don’t do unless they’re dreaming about zombies. That said, I would NEVER want to see video of myself sleepwalking. It would be too embarrassing.

Even though I don’t sleepwalk that much, it’s a weird to know that I could one day wake up in my pajamas by the mailbox with a half-eaten electric bill in my mouth. It is a possibility! If I sleep, I could sleepwalk. If I don’t sleep, I will eventually go crazy and die. On the bright side, some people have it far worse than me, like the guy who tried to strangle his wife in his sleep, or the comedian Mike Birbiglia who once jumped through a second story window while sleepwalking and could have died from his injuries. Instead he turned it into a stand-up routine, off-Broadway play, and indie movie, so maybe it wasn’t so bad for him after all. I have no plans for that myself, so don’t hold your breath for my sleepwalking memoir, unless I happen to write it in my sleep.

Later: Headache on the Hill 2013 a.k.a. The Capitol Hill 5K
Earlier: I went viral, and not in the fame-whoring way
Home: Main blog index