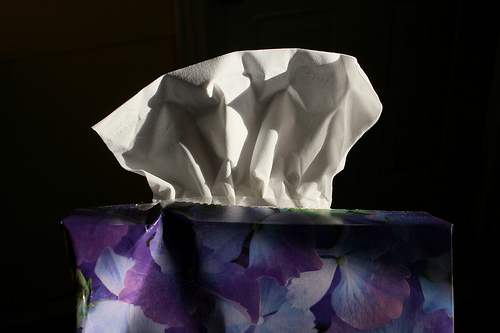 I recommend that you never get sick if 1) you are a freelancer or 2) single. It sucks. And blows. And does all sorts of things you don’t want to know the details of, but I’m going to tell you anyway.

Earlier this month I spent an entire week being sick. It’s been awhile since I’ve had a full-blown, lie-on-the-couch-all-day, illness and I’d forgotten how miserable it can be. Friday night my throat was a little sore when I swallowed, then I went online and learned that a few of the friends I’d recently visited in Wisconsin were ill too, so we were basically tracking disease vectors on Facebook. (Does the CDC do that? I bet they do.) I was soooooo close to getting through the winter without getting ill, but not even regular hand washing could save me at this point.

Twenty-four hours later I was sleeping with my mouth open because my nose was so stuffy, though I don’t know if it’s technically sleep when you keep waking up each hour in a half-conscious daze. It was more like a night of serial napping. My mouth was painfully dry and my tongue felt like sandpaper. The taste alone was bad enough, but I was most fixated on the fact that saliva protects your teeth from decay, so my mouth was turning into a cavity factory with every breath. In the five months since my last dental visit I’ve been practicing the best dental hygiene of my life. I’ve been flossing every day. EVERY DAY! My goal is to go to my cleaning next month and not need a single filling or crown. So the idea that my stuffy nose might be subverting my oral hygiene goals was worse than the dry mouth itself.

It was easier to breathe when I was trying to sleep if I was propped up on a lot of pillows. It didn’t feel very natural though, and I found myself wishing I had one of those beds the Minbari used on Babylon 5 that are tilted at 45 degrees, because I am a total dork and only three of you will have any idea what I’m talking about (if I’m lucky).

Eventually my throat became so sore that it hurt to swallow, which made me fixate on trying not to swallow, which just made me swallow more. The same thing happened to me when I tried Botox as a headache treatment a few years ago. They make you sign a disclaimer acknowledging that in rare cases the Botox can migrate and paralyze the muscles that allow you to swallow, so on the ride home I couldn’t keep myself from swallowing over and over again to be sure I still could.

I didn’t have much energy, so I spent most of my time on the couch watching a marathon of The Americans on my DVR. (Excellent show! I don’t think that’s just the cough medicine talking!) I focused most of my energy and will on making a trip to the grocery store every other day for cough drops or orange juice or another box of tissues. (Tissues suddenly become the most important commodity in my life, right after orange juice and Mucinex.) It took serious effort to get myself to the store and back without falling over, which is why being sick and single sucks. If I had a significant other I could just send him to fetch me supplies and spoon mint-chocolate chip ice cream into my mouth. But alas, it all fell upon me.

On the fourth day I made it to the doctor to see if it was strep throat. It wasn’t. So I had to let the illness run its course. This involved napping until 4pm on Wednesday, and by the time I woke up they’d elected a new pope! How could they?! I was really miffed about this. I didn’t get to see the white smoke or feel the hour of anticipation as we waited to see who appeared at the window. I woke up and it was a done deal. No seagulls on chimneys for me! This event has happened a total of two times in my life, and I’ve now slept through half of them.

When I was actually conscious and watching TV I became hypersensitive to the word “viral.” They kept talking about viral videos on Good Morning America or stories that had gone viral. Viral this, viral that. Do you know what has gone viral? I have! And it sucks! So please stop using the word “viral” in such a flippant manner. Thank you. Signed, Angry Sick Girl.

Eventually my congestion went away and was replaced with a hacking cough that lasted for several days. The skin under my nose was red and peeling from all the tissues. Finally it stopped hurting to swallow, and I was not sick anymore. However, my sleep schedule was completely screwed up. A month earlier I’d finally gotten into a somewhat normal routine which involved getting up a decent hour, something I have literally been trying to do for years with no success. Then I got hit with this bug and couldn’t fall asleep until 4am because I’d been napping so much. Grrrrrr.

This is the first time I can remember getting this sick since I started working for myself almost four years ago. Since I’m self-employed I don’t get any paid sick leave. I just get an inbox that fills up with emails from clients that I was too stuffy-headed to reply to in coherent English. There was one project that I absolutely, had to finish that week because of a non-negotiable deadline, so I somehow managed to drag myself to my computer and code CSS for 90 minutes a day before crawling back to my lair of pillows and blankets. But otherwise my business was CLOSED. I spent most of the next week trying to respond to all my emails and nearly had a nervous breakdown trying to prioritize everything and rejigger my schedule. By Thursday evening I felt like weeping, or changing my name, moving to Costa Rica and never checking my email again. (Though God only knows what tropical viruses I could catch there.)

Everything is at a point now where it seems manageable, if not actually finished. And I’m more grateful to be healthy than I’ve ever been, even if “healthy” for me involves things like chronic headaches. At least I can breathe through my nose! Yay, nose breathing! So underrated. But I still feel like a week of my life was sucked into a vortex and I’ll never get it back. I only have so many days in my life, and I’d like to enjoy them as much as I can, not stuck on my couch mouth-breathing and sucking on cough drops, even if menthol tastes like magic.

Later: I can do that in my sleep (but I wish I didn’t)
Earlier: Good Morning Photobomb
Home: Main blog index