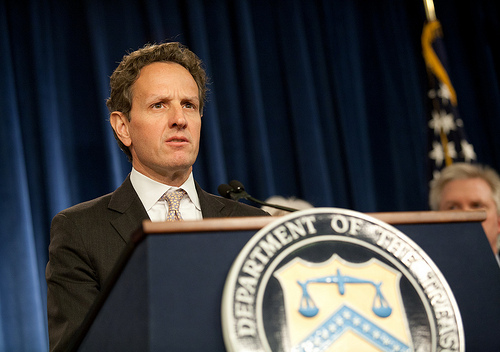 Timothy Geithner is resigning as Secretary of the Treasury and it makes me sad. You see, we were in this together and now he’s leaving. Let me explain.

In January 2009 after I’d had a headache for 10 months straight, I finally decided to visit a headache clinic in Michigan. On the coldest day of the year. Literally. I drove up the night before my all-day appointment, dragged my suitcase through the snow, and checked into my hotel room. Then I decided to go out to eat. My nose hairs froze on the way to the car and it took the heater several long minutes to warm up as I drove around an unfamiliar town.

It’s easy to get lost in a city you don’t know and even easier when it’s pitch black out. I didn’t have a GPS or a smartphone because this was 2009 and the iPhone wasn’t that much older than my headache itself. I remember driving around Ann Arbor looking for somewhere to eat, not knowing the name of the street I was on, just trying to remember how many turns it would take to get back to the hotel. I had NPR on the radio and it was so dark that it felt like I was in the same room with the reporters but with the lights off. And Timothy Geithner’s confirmation hearings were going on. The economy had recently crashed, so Secretary of the Treasury was a pretty significant gig. We were all getting a good laugh out of the fact that the man who’d have a big part in steering our economy had improperly filed his taxes in 2006. Congress was giving him grief about it.

And now he’s leaving! How dare he! I suppose his battle is over. He’s done what he can with the economy and he’s off to make much more money doing something else, I’m sure. His part is over, and I’m still here with the same headache I’ve had for almost five years. It makes me sad that Timothy Geithner gets to leave the part of his life that started that January night and I don’t. It makes me sad that that part of my life is moving further and further into the past, making this part of my life stretch longer and longer. My memories will no longer be of current Secretary of the Treasury, Timothy Geithner, but former Secretary of the Treasury, Timothy Geithner. And on and on and on until I’m telling this story to someone who wasn’t even born before the iPhone came out.

But that’s how it is. I managed to find my way back to my hotel that night and to the headache clinic the next day and through a thousand other steps that got me here to this moment now. My headache is not nearly as bad as it was back then, and the economy isn’t as bad as it was in 2009 either. I’ll keep on taking small steps, on and on through my life, but Timothy Geithner will no longer be my imaginary comrade on the journey.

Later: Anyone know where I can get a cheap iPad?
Earlier: Reasons I’m Old: The things I used to do just to watch a TV show
Home: Main blog index