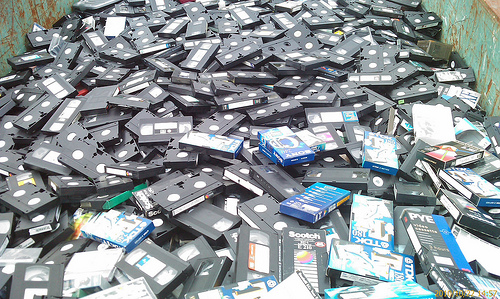 If I want to watch an episode of The West Wing right now all I have to do is turn on my Playstation 3, connect to the Netflix app, and select an episode. That’s it! So simple! So easy! Alas, it was not always this way. Boys and girls, let me take you back in time to…

By the fall of 2000 I had heard good things about this show called The West Wing which had already aired its first season. I tuned in for the season two premiere and was instantly drawn in by the fallout of an assassination attempt and the flashbacks to how the characters originally met. I wanted to watch season one so I could catch up and figure out why this Donna person was so devastated that Josh had been shot. Alas, in the year 2000 we did not have Netflix streaming. Nor did we have box sets of television shows available to purchase the year after they’d aired. We did have the Internet, but when I wasn’t at college all I had was dial-up. (Remember the SCRREEE-EEE-AAAATCH!! of the modem?) And even when I could use the fast internet at school, video compression techniques weren’t that great and YouTube didn’t even exist, so if you did manage to find a video online it was probably a blurry Real Player file. (Remember Real Player? No? Be grateful.)

So how was a girl supposed to catch up on a TV show? I went online and posted a request on a forum for the show. Then someone in California, my fairy godmother perhaps, sent me a box of VHS tapes of the first season. I was never charged for these tapes or even for the shipping, which was bizarre. I think the person who sent them wanted to be sure she couldn’t be sued for profiting off of the show, so she wouldn’t accept any payment. What she sent weren’t even the original tapes. I don’t think they were even copies of the originals, but copies of copies, and one episode had five minutes missing because of a severe thunderstorm warning in a state I didn’t live in. But I was so happy to have them! I was in procession of rare precious treasure! After I’d finished watching the tapes I paid it forward by giving them to a friend, who also felt special for acquiring such a rare commodity.

This must be how my parents feel when they tell stories about using record players.

Anyway, it is now ridiculously easy to catch up on TV shows, and most ways are even legal. There’s Netflix, Hulu, iTunes, Amazon, and more. I definitely prefer this world to the one where I had to post on forums and usenet and lurk in IRC channels while waiting in queue to download the banned season three finale of Buffy the Vampire Slayer from a bot. However, I do miss that feeling of accomplishment I got. I felt proud when I was able to locate a copy of something that was not easy to locate. I felt like I was in a special club of people who loved a show so much that they’d spend hours copying it from one VCR to another for a fellow fan. You don’t have to prove your love of a TV show that way anymore. You don’t have to cut through a briar patch to kiss Sleeping Beauty or climb up a tower to see Rapunzel. You can just turn on Netflix. You can watch it in widescreen too, which I find particularly impressive because it meant someone behind the scenes was planning way ahead. It’s better that way and I wouldn’t go back, but I like to look back and remember how it used to be and all the things I used to do to prove my love for a TV show.