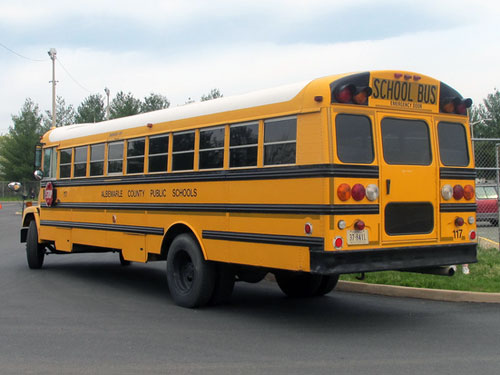 I’ve only known two people who have been murdered.

The first was Ms. Aqua, my school bus driver. I lived in the suburbs but I attended a magnet high school downtown, so I got there by taking a bus to a middle school across the street from the projects which served as a transfer hub. Then I hopped on Ms. Aqua’s bus for the 5-10 minute ride to my school. Her bus had a sign in the window that said “AQUA” spelled in capital letters, but I didn’t realize that was her last name at first. I thought it was a color guide so the younger kids could find the right bus. What color bus do you ride? I ride the aqua bus! But no, that was actually her last name.

It was her first year as a driver and Ms. Aqua wasn’t quite cut out for it. She got lost on the way to school that first day. We had to give her directions. She seemed overwhelmed, but she was doing her best, and there was something sincere and friendly about her that made us like her. She either quit or was fired after a month or two. But before that someone learned her birthday was coming up, so they secreted a cupcake aboard the bus that day. On the way to school we started shouting, “Fight! Fight! Fight!” to get Ms. Aqua to stop the bus, and then we sang her happy birthday and handed her a cupcake and she cried happy tears.

A few years later I was watching the news and Ms. Aqua’s face appeared on the screen. Her ex-boyfriend had broken into her apartment and shot her to death.

The other person I know who was murdered was Sixfredo, who was my friend Kathy’s younger brother. Kathy and I got summer passes to Kentucky Kingdom one summer during middle school and took lots of trips to ride the roller coasters. Sixfredo sometimes came along, and I’d see him whenever I visited Kathy’s house. He was the typical kid brother, full of energy and occasionally annoying in that kid brother way that you don’t really mind. I attended a birthday party for him or Kathy or their little sister once, and I remember him taking several blindfolded swings at a piñata hanging from a tree in their backyard and bursting it wide open.

A few years ago there was an altercation at someone’s trailer about money or something and Sixfredo was stabbed. He died later at the hospital.

There are a few other people who were murdered that I know of second-hand. In middle school a teacher at a another school that one of my friends knew was killed by her son who then put her body on the curb in a trash bag. My younger brother knew a girl who was murdered by her boyfriend a few years ago, who then cut her body into pieces and left the parts in different dumpsters around town. Right before I moved into my old apartment complex, the maintenance man was shot execution style with the rest of his family during a home invasion. Then there was Quinton, a kid at my high school who was shot at the bus stop on the second day of school for no apparent reason.

I can’t help thinking of these people since the Sandy Grove school shooting that took place last Friday. Everyone has to die eventually, but it seems rather unfair when someone else gets to decide when “eventually” is for you. It’s sad and a little frightening to think that your life could be taken away from you at any time and there’s not necessarily anything you can do to prevent it.

I don’t remember the names of the people who shot Ms. Aqua or stabbed Sixfredo, but I remember that cupcake and that piñata. I think that’s all I can do, is remember the good times and appreciate them as they happen, because you never know when this bus ride will be over.