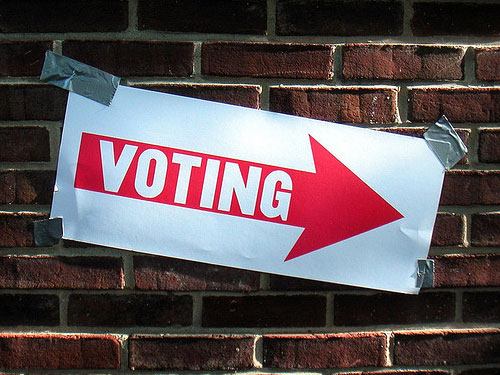 It’s been interesting living in a swing state during this presidential election, and by “interesting” I mean awful. My TV has been having nightmares, y’all, and it’s been broadcasting them during every commercial break. Usually the worst digital dreams it has are of poorly produced local car commercials, but those have all been crowded off the air so candidates can trash talk each other like they’re in high school. I don’t watch that much TV, and when I do it’s usually pre-recorded so I fast forward through commercials. Yet even I can’t escape the distant whisper of “I’m so-and-so and I approve this message.” Well, I’m Jennette and I don’t approve of this message. But I do approve of the mute button.

When I lived in Indiana, I was jealous of the swing states because I am a fool. I felt like my state was ignored and my vote wasn’t as important since my state was guaranteed to go one way. (Except in the last election when it didn’t. Drama! Excitement!) It is annoying to be ignored during an election, but it’s even more annoying to get too much attention, particularly since my vote was never up for grabs. The other side can run as many ads as they want, but I know what issues are important to me and which candidate best represents my beliefs, and no 30-second commercial is going to change my mind even if you play it 30,000 times.

The worst is seeing political ads show up in my Facebook feed as promoted posts. I go to Facebook to have fun, not to get mad at the other political party. There isn’t a “Dislike” buttons for those posts, but I did figure out where the “Remove from news feed” button was on the relevant person’s profile page. I wish there were a way just to hide the one post instead of having to remove someone from my feed all together, but damn, that ad was really annoying.

The only real effect these ads have on me is that they make me really, really excited for election day. I finally get to vote! Soon our long national nightmare will be over! Or just beginning, depending on who wins or if one of the multiple nightmare scenarios play out and we don’t know who won. I am optimistic, but if the worst happens I have vodka and rum in the house. I should probably stock up on chocolate too, just in case. I might head out to the an election party happening at one of the local bars, or I might just stay in with my social media. It’s been fun watching Twitter during the debates, so I’m looking forward to seeing what people will be tweeting as the results come in.

If you are eligible to vote, I hope you do. Seriously. Get off your ass and vote. Don’t know where to vote? Look up your polling place on Vote411.org A hundred years ago I wouldn’t have even been able to vote because I have a vagina. A hundred years! We’ve had airplanes longer than women have had the right to vote. And don’t you want a cute little “I voted” sticker?

If you’re on Twitter and want to update you icon temporarily to say “I voted” to remind others to vote, then use the PicSwitch app here.

Later: An explosion heard on Twitter
Earlier: Well, that was a lot of words!
Home: Main blog index