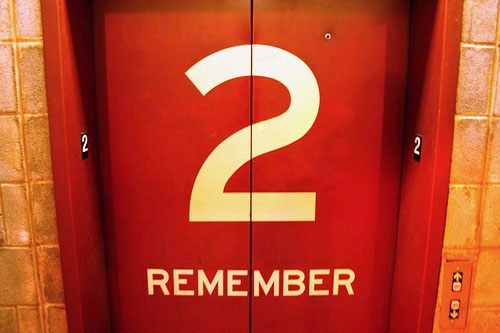 I’ve gotten thousands of nice comments on my blog entries over the years, but it’s the mean comments that I remember best. Fortunately I don’t get many nasty comments, but when I do they get stuck to my memory with super glue, whereas the nice comments are attached like Post-It notes, easy to peel off and forget. I tend to be a positive person who focuses on the good things in life, so I’ve often wondered why the negative thoughts are the ones that get imprinted so deeply. I’d prefer to erase them like an Etch-a-Sketch, but shaking my head back and forth like that only gives me whiplash.

I’ve got a hunch about why this happens. It has less to do with my attitude and more to do with biochemistry. Research has shown that you make more vivid memories when you are emotionally aroused, and reading an unexpectedly mean comment definitely arouses my emotions. The only time a good comment has created that same passionate response in me is when it’s from someone I respect and admire who I didn’t realize read my blog, or if it’s a particularly poignant comment about how my writing has affected someone’s life. The bad stuff happens more often.

Some of the research is summarized on this site (which includes references if you are a fan of science-y reading with large, unpronounceable words). Various things come into play: your amygdala, stress hormones, your prefrontal cortex. Women are more likely to remember emotional memories, and older people are able to let bad memories fade faster than younger people. But overall the message is clear: you remember a message more clearly if you’re emotional when it happens.

Like I said, my hunch is just a hunch. I doubt anyone has done an experiment to see what types of comments bloggers remember better, and what their emotional state was at the time they read them. I don’t think it’s that much of a stretch though. At blogging conferences I’ve had discussions with other bloggers about bad experiences they’ve had online, and man, does that get people talking like nothing else. If we didn’t remember these semi-traumatic events so vividly, I doubt we’d have so many conversations about them, and I wouldn’t see as many tweets and posts as I do complaining about mean readers.

Unfortunately, there doesn’t seem to be much you can do to force memories to fade quicker. There has been some successful therapy with soldiers suffering from post-traumatic stress disorder who were able to tone down their memories by thinking about them after taking a beta-blocker called propranolol, which lowers blood pressure and heart rate. When a memory gets accessed, it is later rewritten back on your brain when you’re done, so you can actually change a memory while thinking about it and rewrite it in that altered way. If you remember it when you’re less stressed, you can rewrite it with less emotional intensity attached. This also means that the memories you access the least often are probably the most accurate because they’ve been rewritten the least amount of times.

It’s sort of sad that good comments don’t trigger a huge emotional response in me, though that might ultimately be a good thing. It means that my readers are typically polite and friendly, and it’s only the absence of those qualities that shocks me. I guess I believe in a good world, and that’s not something I can regret, though it’s something I will try harder to remember.

Later: In the pink, and not in a good way
Earlier: Dental doubt
Home: Main blog index