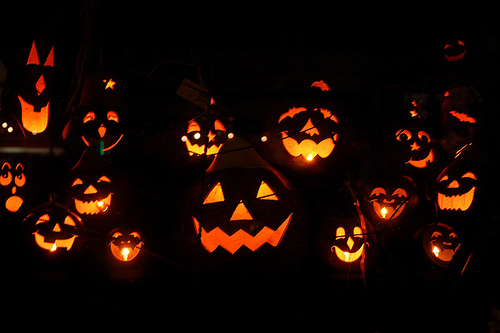 My friend Jennifer had never gone trick-or-treating even though we were both middle-schoolers who were pushing the age at which it’s acceptable to dress up as goblins and demand candy from strangers. Actually, once you put it that way, it’s hard to believe there’s ever an age at which that’s acceptable. Jennifer’s parents did missionary work abroad and they’d never been in the US during Halloween, so I became her guide to a holiday that I hadn’t known wasn’t celebrated everywhere. We dressed up in costumes I can’t remember and trekked through my neighborhood collecting candy.

“So we go up to the door and say ‘Trick or treat?” she asked.

“And they just give us candy?”

When I went trick-or-treating with Jennifer I felt like a native guide showing an anthropologist around my home country. She never said, “What strange customs your have!” But I could tell by her bemused expression that she was probably thinking it. Trick-or-treating was normal to me, but a novelty to her. It was one of the first times that I realized what I thought was normal wasn’t normal for everyone else. My life was not like everyone else’s life. My part of the world was not like everyone else’s part of the world. It’s something most people discover if they travel abroad, like I did many years later and got to marvel at things like prawn sandwiches and Nutella paninis.

It made me realize that so many of our holidays and customs must seem strange and exotic upon first encounter. I guess if you’re around anything long enough it can seem familiar and normal and “just how we do things.” But it’s good to appreciate that it’s not normal for everyone. It’s good to be open to new experiences. Especially experiences that involve free candy.