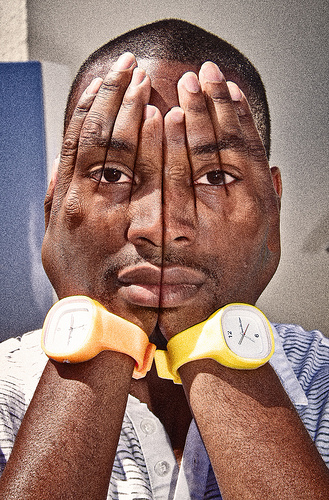 You don’t always have to see something to know it’s there. You can observe its effects on other objects and deduce its existence. That’s how Neptune and Pluto were discovered, not by direct observation but by the effect their gravity had on the orbits of other stellar objects. Similarly, you don’t have to watch the presidential debates to know they’re happening, you just have to read your Twitter stream. It’s far more entertaining anyway.

I don’t like conflict. I go out of my way to avoid confrontation. Watching two people go head to head about important political issues is not my idea of a fun evening. I can’t even watch The Amazing Race because I get stressed out that my favorite team will miss their flight. Watching Butler compete in the NCAA Tournament two years in a row nearly killed me. I much prefer not caring about sports. The idea of watching a confrontation that will affect whether I’ll be eligible for health insurance in 2014 in any other form than the North Carolina plan for high risk individuals is way, way, way, too tension filled for me to actually watch it live.

Thankfully I don’t have to. I have Twitter. And on Twitter people make clever jokes and create cute #malarky hastags and make me laugh about something I would otherwise be watching while curled up in a ball on the sofa. I don’t have to watch the event. I just watch other people’s opinions about the event to get a picture of it. It’s like the story format of Citizen Kane. You don’t ever get to meet Kane, but you learn a lot about him from everyone who knew him. Of course, that’s also the problem. You never get to meet Kane yourself, so you never get to make your own opinion. You’re going on what other people think, so you need to choose those people wisely. The people in my Twitter stream mostly share my political viewpoints, so those tweets are undoubtedly skewed towards one worldview. Hello, echo chamber (echo chamber [echo chamber])! But it also makes me wonder how much of our opinions are skewed by what other people think anyway. If all your friends like a TV show don’t you feel pressured to like it too? Do we ever come to our own opinions without at least some outside influence? Even if I watched the debates, wouldn’t the way I filter them be affected by what friends and pundits say?

Regardless, thank you Twitter! Or rather, thank you to all the funny, clever people who use Twitter. You make it much easier to get through an evening when all my TV shows are pre-empted.

Later: The Fourth, the Fifth, the Minor Fall
Earlier: Love is for the birds. Peregrine falcons, to be specific.
Home: Main blog index