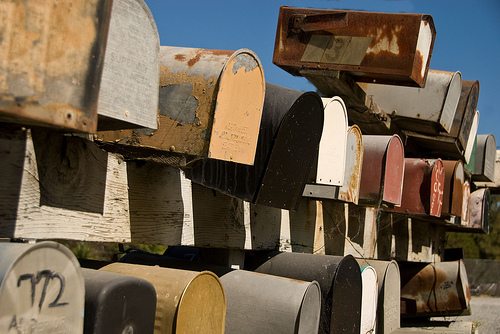 Here’s what I know about the person who lived in my apartment before me. She’s a woman. Her name is Kate B. She subscribes to Allure, a magazine I had never read before and a magazine I have no desire to read again after skimming my complimentary copy. She’s on the Victoria’s Secret mailing list which sends out a ton of mailings, making it difficult to believe they are secret about anything. It is very difficult to get off of the Victoria’s Secret mailing list, which involves a phone call that requires you to speak to an actual human being.

Kate received a pharmacy journal in the mail, so she probably is or was a pharmacy student at UNC like lots of other grad students that live in my apartment complex. There doesn’t appear to be a Mr. or Mrs. B. because all the mail comes addressed to Kate.

Kate received a lovely, little, blue card in the mail which was so cute that I was disappointed it was not addressed to me.

She shops at Crate and Barrel.

All in all, I think I would find Kate to be a pleasant enough person, but I doubt we would be soul sisters. She’s way more girly than I am, but we could probably make small talk about all the meds I’ve been on in the past five years. I’d ask her if she’s heard The Drugs Song and then we could sing it together.

I wonder what the person who moved into my old apartment thinks of me. Did she get my copy of Neurology Now and think I’m a neurologist? Is she as bewildered as I was that the Firestone in Indianapolis is still sending me coupons? (Sorry, I’m not driving that far for an oil change.) I don’t know. It’s odd what you can discover about people from their mail, but it’s only a sliver of a life. Still, the glimpse is rather fascinating because it leaves so much for you to fill into the blanks.

Later: Thanks for the royalties
Earlier: Mix it up: Just like a mix
Home: Main blog index