While we’re on the topic of things going horribly wrong, my younger brother sent me this photo of a special bonus gift that was packaged with his new computer monitor. 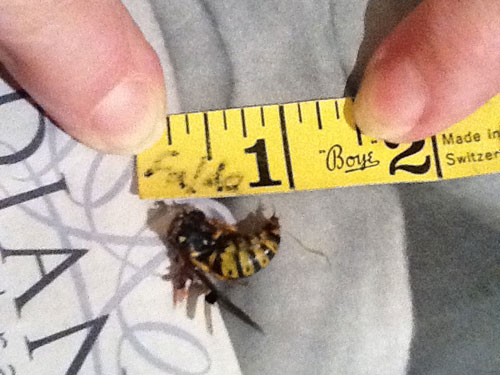 That’s right! A yellow jacket! He opened up the box to be greeted by an intense, horrible pain in his finger. At first he thought he’d stuck some sort of splinter, but quickly discovered the wasp in the packaging and killed it dead. (The bug started it.) I’m not sure how a wasp ended up in the box. It probably flew into the packaging at the factory and got mailed across the country along with the monitor.

I once found a little piece of red plastic in a TV dinner I was eating, but this story definitely tops that. Lil’ Bro is going to write the company and see if they’ll offer him any kind of apology. I mean, we’ve heard of computer bugs, but this is ridiculous.