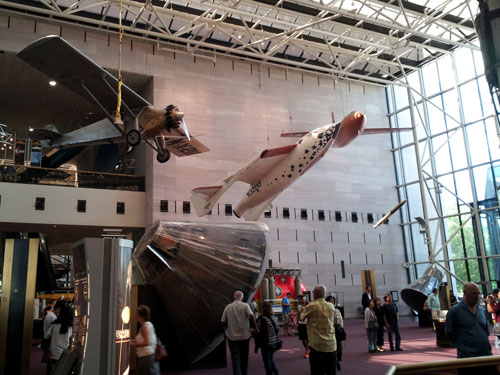 When I visited my dad last month I had a five-hour layover between the time my train pulled into Union Station in Washington, DC and the time my flight back to Raleigh departed. I decided to spend my layover at the Smithsonian National Air and Space Museum.

The thing that complicated my sightseeing was that I had to wheel my carry-on suitcase everywhere along with my backpack full of bricks (aka my laptop). I had to lug all this stuff with me on the Metro, up the escalator, and across the pebble-textured sidewalk that made my suitcase bounce like popcorn cooking in a pan. Overall, it gave me a greater appreciation for what wheelchair-bound individuals must deal with on a daily basis. Now, I won’t pretend that dragging a suitcase around all day gave me an understanding of what it’s like to be paralyzed, which is undoubtedly a complicated experience both physically and emotionally. However I did find myself thinking about things I normally don’t, like searching for the ramp to the front entrance instead of using the stairs. I also decided not to go into the life-size space station exhibit, even though I really, wanted to, because you had to go up and down a crowded, narrow stairway to see it. It just wasn’t worth the trouble. I also had to stop, sit and take lots of breaks because dragging all that crap around is tiring.

The Air and Space Museum has lots of exhibits, but the real attraction is all the airplanes and spacecrafts that they have on display, mostly hanging from the ceiling. It allows you to get a sense of how big these machines are, which you don’t quite grasp when you see them on TV. I was most excited to see SpaceShipOne (all one word, according to Wikipedia, so it must be true), the privately developed spacecraft that won the Ansari X Prize in 2004. 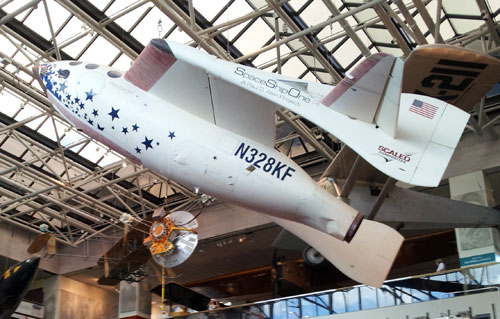 Honestly, I don’t think it’s any bigger than a school bus, but it’s been in outer space! I also browsed through exhibits about the Wright Brothers, the early space programs, military aircrafts, and even a gallery of flight-related artwork.

I also loved this stained glass window that represents the electromagnetic spectrum. I like me some art with my science. The ROYGBIV section is what is visible to the human eye, and everything else is ultraviolet, infrared, x-rays, gamma rays, and other stuff I should probably remember better from science class.

I think it’s possible to see everything in the museum in a day, but I got tired before that happened. Instead I decided to get some gelato at a place Yelp recommended before heading back to the airport. I headed north across the mall and was disappointed to see that it was anything but scenic at the moment. 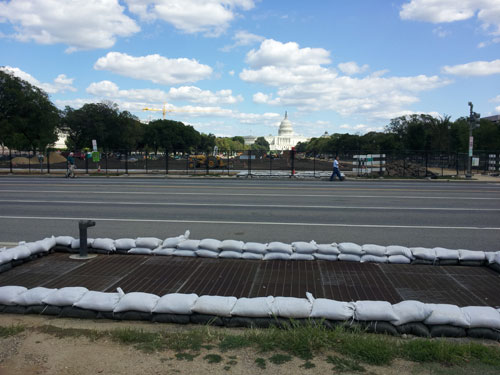 I also happened to pass the sculpture garden of one of the Smithsonian museums, so I sat down by the fountain to rest for awhile. (Dragging around luggage is seriously exhausting!) 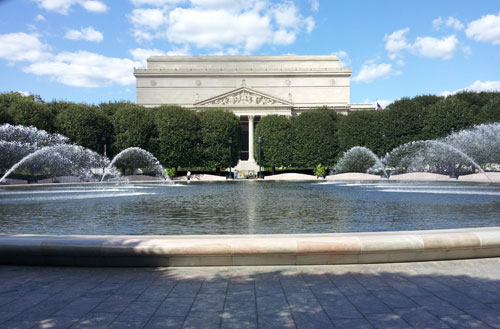 I finally arrived at Pitango Gelato, where the server had a sexy, foreign accent, as if a man serving me sugar and cream wasn’t sexy enough. They gave me a tiny little spoon, which was cute and also helped make the dessert last. 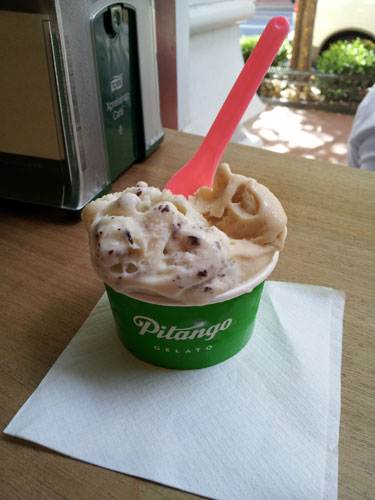 After that I got on the Metro and waited at Reagan National airport for my flight. The wi-fi was free and seriously fast. I was able to watch part of a movie on Netflix streaming while I waited. Color me impressed. Then I flew home on a plane that wasn’t extraordinary enough to make it to a museum, but did the job of getting me home just fine.

Later: What I don’t know about WWII could fit in a U-boat
Earlier: Thanks for sticking around
Home: Main blog index