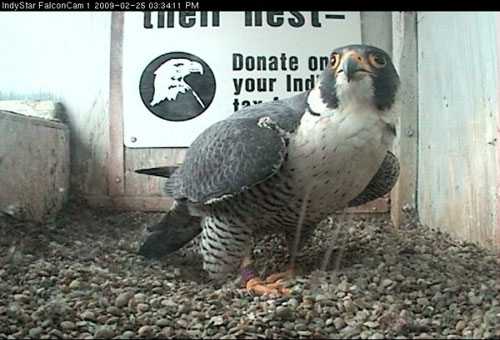 Of all the things I achieved at my last job, I am most proud of setting up the falcons on Facebook. I am not talking about a sports team. I’m talking about two actual Peregrine falcons, Kinney and KathyQ, who made their love nest in a box at the top of a skyscraper in Indianapolis for many, many years. Unbeknownst to them (presumably) they starred in their own reality show for many years, documented in 20 second intervals via the Indy Star FalconCam, which always got a huge boost in pageviews during egg laying season. Those birdies really helped us meet our traffic goals, and they didn’t have to burn down an apartment complex or commit a horrific murder to do it!

No one asked me to, but I decided the falcons needed a Facebook presence so I set up pages for Kinney and KathyQ. Then I handed the passwords over to the Falcon blogger, Laura, who did all the real work. That this was my greatest achievement in 1.5 years at my old job probably speaks volumes as to why I left. One needs more meaningful accomplishments in life than setting up Facebook pages for falcons. That job is for the birds. (Har, har!)

Regardless, I grew rather attached to these birdies, and not just because they helped pay my salary. That’s why I was devastated to learn that Kinney died last July, most likely after colliding with a building. My mom clipped out the article from the paper and mailed it to me, as if this were an old friend from school who had passed on. Many animal experts discourage you from anthropomorphizing animals since we will never really know what they think and feel or what motivates their actions. But it was hard not to feel sad for KathyQ losing her love bird, the papa to all the babies they had hatched over the years.

However, it appears that three months is a reasonable period of mourning for Peregrine falcons. That’s right, a new bird has been spotted shaking his tail feathers around town, but KathyQ and this unnamed bird are still in the process of introducing themselves to each other. I’m very excited to see if it works out between them, as if I am watching an episode of The Bachelorette: Peregrine Falcons Edition. And I don’t even like The Bachelorette!

I find myself surprised by the amount of emotion I have invested in these birds. I don’t know if it’s any different from the amount of investment I’ve had in TV relationships, like Mulder and Scully on The X-Files, except that these birds are actual creatures and not fictional creations, which might make my attachment more valid. I haven’t been this into a bird’s love life since I learned about the gay penguins at the Central Park Zoo, Roy and Silo. And honestly, I’m still upset that Silo left Roy for some female penguin, that jerk! ALL OF WHICH IS INSANE!! They are birds! I should be spending time working on my own relationships with actual human beings instead of fretting over the love lives of penguins and Peregrine falcons.

Strangely, these feelings also remind me of the way I’ve felt about my friends’ divorces, as I wrote about a few days ago. I wasn’t in any of those marriages, but I was happy when those couples were together, and I was sad when they parted ways. Human beings are wired to want stories, be they real or fictional or somewhere in between. I’ve liked watching the story of Kinney and KathyQ unfold, peeping in on their family over the years. I hope that KathyQ can move on and love again, if falcons even love. There I go anthropomorphizing again. But I can only view the world through the window of my own human brain, or through the lens of a webcam at the top of the skyscraper.

Later: The best way to watch the debates
Earlier: Orange you glad you had Orange Cappuccino and/or Orange Café while it lasted?
Home: Main blog index