I’ve discovered something that smells worse than burnt popcorn in your microwave: melted plastic in your dishwasher. The first whiff I got smelled like someone had just put out a candle, only I wasn’t burning any candles. Obviously my immediate response to this was, Fire! Fire! The apartment complex is burning down! Aaaaahhh!! But before I started tossing cats out the window as part of a frantic escape plan, I decided to sniff down the source of the smell. My nose led me to the dishwasher, which was in heat dry mode a.k.a. death-to-Tupperware mode. 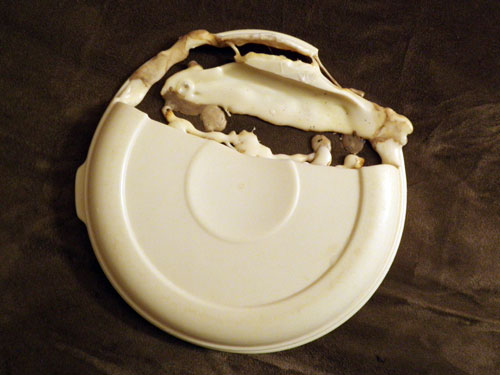 This used to be a Tupperware lid, but now looks like a Dali painting. I checked the number on the lid and saw that is was a number 6 plastic, so not only did it smell awful but it was undoubtedly filling my apartment with toxic, cancer-causing fumes. I did some Googling to see if I was now going to have two-headed babies, and if so which circuses would provide them with the best opportunities. I came across this article that said, “Evidence is increasingly suggesting that [number 6] plastic leaches potentially toxic chemicals, especially when heated.” Thanks, Interwebs! Freaking people out since 1992.

I immediately carried the deformed lid outside to the dumpster, after snapping some pics. Thankfully there wasn’t any plastic stuck to the heating element in the dishwasher, so I didn’t have to scrape anything off. I took all the dishes out of the dishwasher and ran it with nothing inside to wash away any lingering plastic. After that I rewashed all the dishes just in case toxic chemicals were stuck on them. I opened all the windows, turned on the kitchen ventilation fan, turned on central air system’s fan, and even turned on the overhead fan in the bedroom that always seems 10 seconds away from lifting off and crashing into my bed. All the windows in my apartment are on one side of the building, so it’s hard to establish a cross breeze. The place still reeked, so I grabbed my phone and sat in my car for the next hour listening to music in the dark parking lot, which was kind of relaxing even if I looked like a woman waiting to rendezvous with her drug dealer.

When I came back in, the place still smelled like an iPhone factory, but not as strongly as before. I kept the windows open all night, which goes against my paranoid instincts that someone will use that opportunity to scale the wall to my second-floor apartment, cut through the screen, and steal my tiny 19″ flatscreen TV which they surely covet. At least there is a window right near my bed, so I was able to breathe fresh air through the night. It got a bit chilly in the night, but nothing a blanket couldn’t ward off. This morning the apartment smelled basically normal, so hopefully continuing to live here won’t give me a tumor.

The lesson here is that when they recommend that you only wash lids in the top rack of the dishwasher, LISTEN TO THAT ADVICE. I thought this lid was big enough that it wouldn’t fall through, but it did, and I’ve never made a mistake that smelled worse. I take comfort that my Googling revealed I’m not the only person to ever make this mistake. And I couldn’t help but think of Shauna who recently washed her FitBit, but at least she didn’t melt the thing. I was excited to finally have a dishwasher in my apartment, but I was obviously not ready for the great responsibility that comes with such an appliance.