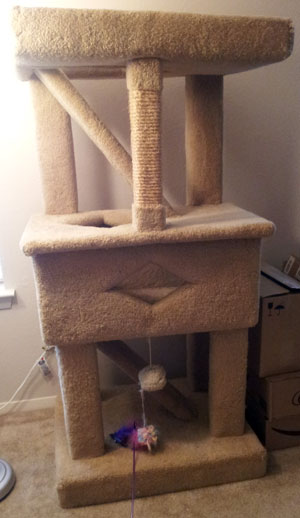 My family has a history of dumpster diving. Well, not dumpsters exactly, but we have found some marvelous things in the trash. That’s where my dad found my childhood tinker toys, and later an imitation Stradivarius violin that we sold to buy a piccolo in high school. So when I saw a three-story kitty condo discarded next to the dumpster in my new apartment complex, something in my DNA screamed “Me want!”

My enthusiasm was somewhat dampened when I started dragging this thing across the parking lot and realized it weighed more pounds than I’d like to lose. The dumpster is about 50 yards from my front door, but I had to take several breaks before I got it to the stairwell, where I had to flip it end over ear to the second floor. I felt no need to head to the exercise room after I got this thing inside my place.

Now, before anyone turns me in for kitty endangerment, I was sure to do a treatment of Revolution before the move, so no one is going to catch fleas or heartworms or other nasties from this thing. I also thoroughly vacuumed every nook and cranny of that condo with my neato vacuum attachments. The condo hadn’t actually been thrown in the dumpster either, just left next to it, so it wasn’t smelly or gross.

It was also free, which makes it ten times better than something you have to pay for! It must cost at least one hundred dollars, probably closer to two hundred. And as much as I love Java Bean and Office Krupke, I would never spend two hundred dollars on them unless they were in mortal danger. Plus, every time I see this condo I will be reminded of what a steal it was (almost literally) and how awesome I am for snatching it up. It is already a popular piece of furniture, and has several holes that serve for a good game of whack-a-mole.

The only sad part comes when I wonder why someone would throw out a kitty condo like this. Either 1) they were moving and didn’t want to move something so big and unwieldy or 2) their kitty died, which is such a horrible, sad thought that I’m really pulling to reason #1. Either way, it’s getting good use now. Best thing I’ve found in the trash this year!