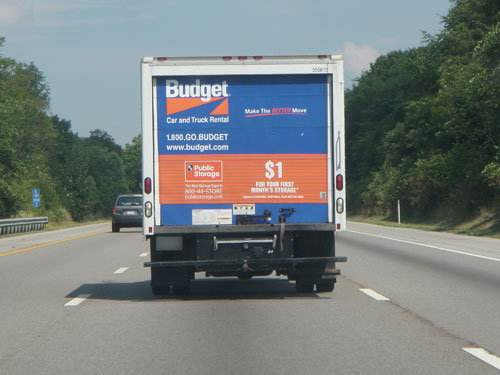 I have moved to an apartment with 100% less pot smoke. Yay! I feel like such a grown up. Not only that, but I now have a washer, dryer, dishwasher, AND an ice maker. The ice maker was a surprise, but a frosty, fun one! The other surprise is how ecstatic owning renting all these appliances makes me. This too make me feel like a grown up, but in a less sexy way. I never thought I’d be thrilled to have a lint trap to clean.

Fortunately I scheduled my move the day before the heat wave of death struck the east coast, so I thank the weather gods for smiling down upon me. I suppose they’ll expect me to sacrifice a meteorologist to them in return. *sigh* I hired big burly men to move all my stuff and they were able to complete the move in 3 hours and 9 minutes. I felt like a lazy ass lounging around while they carried heavy objects from one second story apartment to another. But if I’d tried to help I would have been as helpful as a two-year-old helping in the kitchen who just spills cake batter all over the floor. So I read tweets on my phone instead, because I’m evidently becoming one of those people.

I moved from a 780 sq/ft two-bedroom apartment to a 630 sq/ft one-bedroom, and I’m rather surprised all my stuff fits. I have a nook for my office, but it’s smaller than my old office, and the rent is more expensive here because washer/dryer living don’t come cheap! All of which means the home office deduction on my taxes is really going to take a hit this year.

I’m about 75% unpacked, so the place is looking more like an apartment and less like a box factory. I’ve noticed that the rate of unpacking could be graphed like a descending curve, moving from the unpacking-tons-of-essential-crap-even-though-I-can’t-feel-my-arms period to the all-these-unpacked-cardboard-boxes-might-make-fine-coffee-tables period. Part of me wonders if I really need the stuff that’s still sealed up. When I moved I found at least one or two boxes that were still sealed up from my last move.

Anyway, I’m starting to feel settled in, and there are no longer any cats quivering in fear, hiding between the dress bags in the closet. The most comical part of my move was when my sweaty self stepped into the shower and I realized I was eye-level with the showerhead. I’m 5’9″, so it’s not like I’m a giant. This apartment complex is evidently Hobbit-friendly. I didn’t want to have to do squats to rinse my hair, so I bought a detachable showerhead which I mounted without a problem. I’m always happy when problems like that are easy to fix, unlike having loud, pot-smoking neighbors which you have to spend hundreds of dollars and dozens of hours of sweat to escape.

Later: Look what I found in the trash!
Earlier: Answering this correctly would prove I *was* a robot
Home: Main blog index