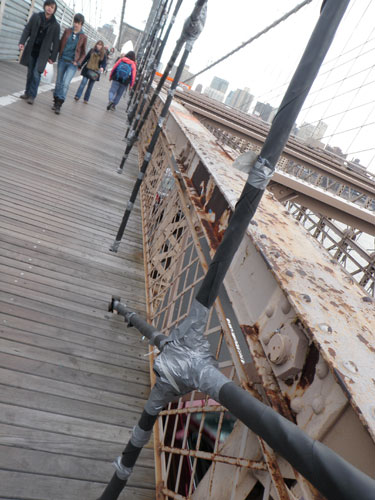 Hey, remember when I visited New York last February? No? I barely do either! But I’m finally blogging about it based on all the notes I took. Pen and paper are my second hippocampus.

When I wasn’t manically coding web sites during my first two days in the city, I was reading a print-out of the comments you guys left on my post asking for recommendations. Thanks for that! I love to plan, plan, plan, my vacations, but I felt like I was cramming the night before a final for this one. I didn’t flesh out my itinerary until I was in the city studying your crib notes. I circled anything that was mentioned more than once, and with some help from Google I made a list of what I wanted to see and where I wanted to eat. I wasn’t sure how many days I would have free during my work-cation, so I did the stuff I most wanted to first.

Whenever I told someone I was going to the World Trade Center Memorial, they told me, “Get a visitor’s pass!” Seriously. It was like I said, “Knock, Knock,” and they replied, “Who’s there?”

Me: Going to the WTC Memorial!
Them: Get a visitor’s pass!

So, yes, I got a Visitor’s Pass online and then spent an hour installing the proper print drivers so I could use Jasper and Zoey’s wireless printer (which doubles as a kitty bed). It’s easy to get a pass. I got mine the night before and all you have to do is pick the half hour window of time you want to enter the memorial. If you don’t print yours beforehand, you have to find a special ticketing station that is a few blocks from the actual memorial. And trust me, they will check your ticket. They checked my ticket at least three different times. You also have to go through a checkpoint like airport security, only you can keep your shoes on and they don’t take naked pictures of you. They x-ray all your possessions and you have to walk through a metal detector, and after winding your way through a mini-maze you enter the memorial. Of course, me being me, I found myself having two inappropriate thoughts. 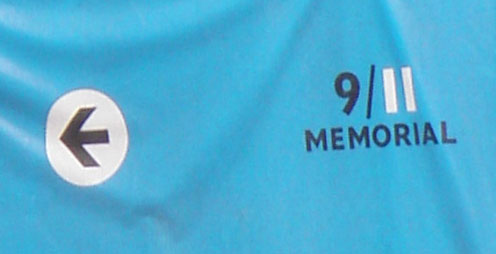 The graphic designer in me can’t help but notice the visual identity opportunity that arose when terrorists chose the 11th day of the month to attack a pair of buildings that looked like the number 11. Did they know they were making the logo for the future memorial really easy to design? Probably not. And even typing these sentences makes me feel like a bad person because thousands of real people with families, friends, dogs and cats died here and I’m sure none of them give a shit about the logo opportunities the day of their deaths provided.

Inappropriate thought #2
This was more like an inappropriate song that got stuck in my head. Yes, I kept wanting to hum “Christmas at Ground Zero” by Weird Al Yankovic while I was visiting Ground Zero. Yes, I am an awful human being, but it would not go away!

I want you to know I feel genuinely bad about both of these things. I realize that the events of September 11th are still very painful to many people and personally changed thousands and thousands of lives. I’m not trying to make a joke about those people’s pain. I’m just observing the thoughts the memorial brought to my mind, as odd and inappropriate as they were. 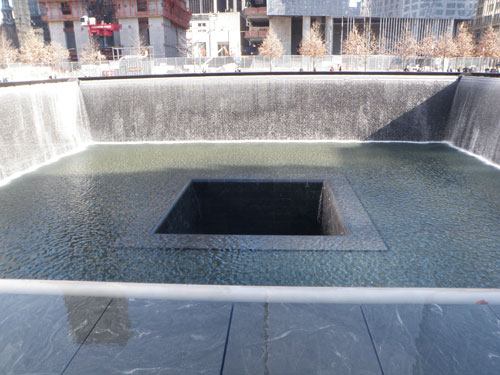 The WTC Memorial consists of two square fountains built in the footprints of the skyscrapers that used to stand there. The names of those killed in the September 11th attacks in New York, Washington DC, and Pennsylvania are engraved around the edges of the fountains, as are the names of those who died in the WTC bombing in 1993. There is a museum still under construction that will be opening soon, so you can’t currently learn that much history at the sight. They have a few artifacts from that day available to view in the visitor’s center, but not too many, so the emotional impact of the memorial wasn’t as big as it could have been for me. Also, the fact that the memorial is currently surrounded by a construction zone kind of kills the solemn mood. Once the museum opens I think you’ll be able to get a better sense of what was lost that day and how it changed the world.

After visiting the memorial I decided to meander my way to The Brooklyn Bridge. On my way there I accidentally stumbled upon two things. First, the Canyon of Heroes, which is the part of town where they hold ticker tape parades. Each parade is recorded with a plaque in the sidewalk. Tip: The best way to get a plaque is to be a visiting royal. I swear, half of these parades were for queens or kings who’d popped into the city for a day. 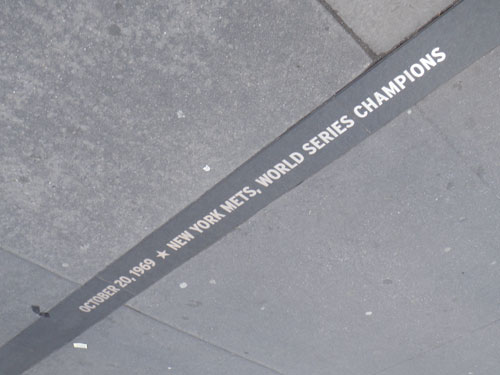 I only recognized the Canyon of Heroes because Penny mentioned it in a comment on my travel guide post. Thanks, Penny! But for some reason, when I was writing this entry I called it the Avenue of Champions. I have no idea how I managed to get that from Canyon of Heroes. See, this is why you should write your travel entries right after you travel! 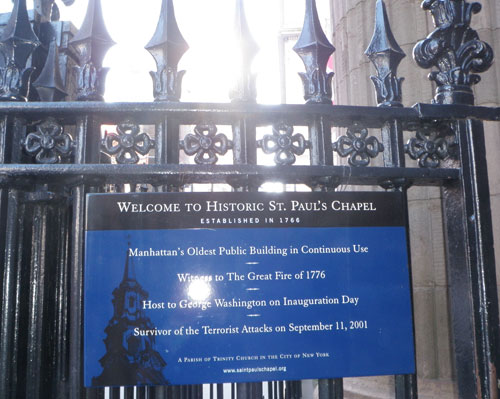 As I continued to head toward the bridge I passed St. Paul’s Chapel, which was not on my to-do list. However, they had a display outside the chapel about its involvement during the September 11th attacks, and I eventually found myself drawn inside, fascinated by all the history. The chapel is just a few blocks away from the WTC, yet managed to survive the attacks. It also survived the Great New York City Fire of 1776, so I think it’s going to take Godzilla to raze this place. Or maybe Mothra.

The chapel served as a staging point for relief after the 2001 terrorist attacks. Firefighters and emergency responders would take naps on the pews. People from around the world sent encouraging letters and gifts, like this huge chain of origami cranes from Japan. 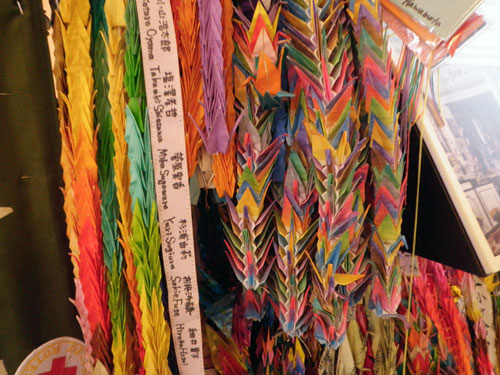 The emotional impact I found lacking at the WTC Memorial was present here at St. Paul’s, so I’m glad I happened upon it.

I kept trekking toward the bridge and unexpectedly passed the Woolworth building, because you evidently can’t walk across New York without tripping across a landmark or two. 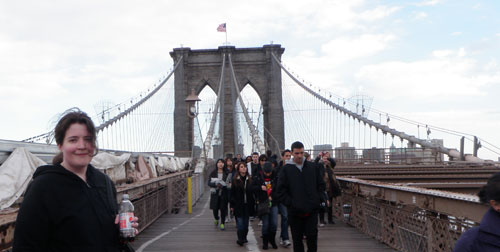 Finally, I found the bridge! Then I immediately stopped a tourist to take a photo of me on the bridge. I paid this forward by taking photos for three other people as I made my way to Brooklyn. If you want to steal a camera, this is definitely the place to do it. Just be sure you can run really fast in the other direction. The pedestrian walkway for the bridge is above the roadway and has guardrails, so I felt completely safe walking its length. I also had an urge to yell, “BROOKLYN!!” the whole way across, which I think must be from a movie, but I’m not sure which one. Newsies, perhaps? There are some plaques at the midpoint of the bridge which fill you in on its history. There was also one spot where couples had attached locks to the bridge to symbolize their commitment. 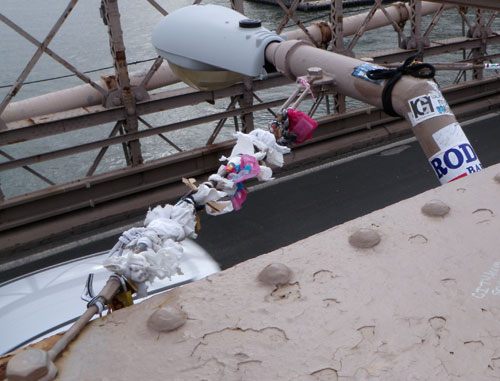 And, oh yeah, as I mentioned before, parts of the bridge were wrapped in duct tape. I have no idea what that’s about and didn’t want to think about it for too long.

When I finally reached Brooklyn, I wandered into the bike lane for a moment. That’s why a cyclist yelled, “Move over, STUPID!!” at me, which is when I truly felt like I was in New York. Actually, cyclists were yelling at pedestrians during my entire walk, which makes me think the bike lane is more of a concept than a reality.

At this point my feet were tired, and I really had to pee. I walked past a park where a ninja was practicing. Or something. Some guy was wearing all black and doing judo, I think. I tried to snap a picture inconspicuously but he was too far away, and I didn’t want to try sneaking up on a ninja. I stopped at a grocery store to pee, and almost got locked inside the bathroom. I found the subway and was very proud of myself for figuring out which train was the express and not the local.

I got myself back to the Upper West Side and stumbled into an Irish pub near the station for dinner. The food was decent, the waitress had a great accent, but she somehow forgot I was there even though there were only customers at two tables. I suppose it would have been really easy to run out on my bill, which means I missed an opportunity to steal a camera and dinner all in one day. Bummer! Instead I waited for ten minutes after I’d finished eating, got up out of my chair, and actually went to the bar to ask for my bill.

After that I was thoroughly exhausted, made it back to the apartment, and called it a day. A very nice day indeed!

More to come on Friday…

Later: The New York Diaries – Part 3: High Line, Chelsea Market, and desserts courtesy of the chef
Earlier: How did I not know there was a castle in Chapel Hill?
Home: Main blog index