Oh, right, I did stuff last weekend too 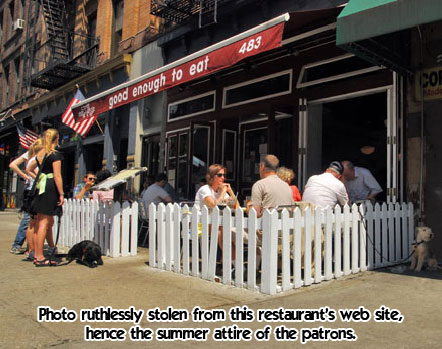 Before I regale you with tales of what I did during my second weekend in New York, let me flash back to the previous weekend which I forgot to blog about. Whoops! I did brunch at Good Enough to Eat, a cute little place which features a white picket fence on the sidewalk. My table was shoved right next to one with another couple, which was weird because I could hear their entire conversation but had to act like I wasn’t there. Another hazard of eating alone. I got the yummy Peter Paul Pancakes which were served “with Belgian chocolate and coconut, topped with toasted coconut,” though what that has to do with anyone named Peter or Paul is anyone’s guess. And what happened to Mary? Doesn’t she get pancakes too? (Some instant Googling reveals that “Peter Paul” probably refers to a brand of coconut flour, though I had to go to the second page of results to figure that out. The second page! You’re really slipping, Google.)

After that, I went on an accidental tour of locations from You’ve Got Mail, a movie in which people use AOL, clearly making it a horror film. On the way back to the apartment I happened to pass Cafe Lalo, which is in the movie, specifically the part where Tom Hanks and Meg Ryan are supposed to meet in person for the first time. I realized it was the cafe from the film because they have pictures posted outside of that scene, which proves that the place isn’t all that famous. It’s not like they have to post scenes of Sleepless in Seattle outside the Empire State Building. 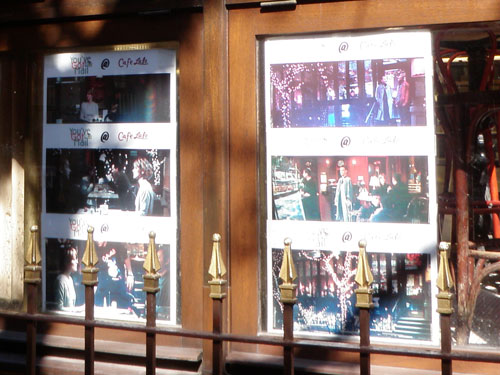 Then I headed to Zabar’s, a large, gourmet shop with a rich local history and all that, which is also in the film, though I didn’t know that until I was reading a brochure later. It’s the place where Meg Ryan doesn’t have the money to pay for her groceries and Tom Hanks swoops in to pay for her.

But that was last weekend! Time jump over. On my second and final weekend in New York I headed to Broadway to see a performance of Priscilla, Queen of the Desert which was recommended by Kelly. Good thing too, because it looks like it just closed on Sunday. I got my tickets at a reduced price at Broadway Box, which offers lots of deals on Broadway shows. I also made reservations for dinner at Becco, an Italian restaurant in the theatre district recommended by Anna and Carol. On my way there I happened to pass this: 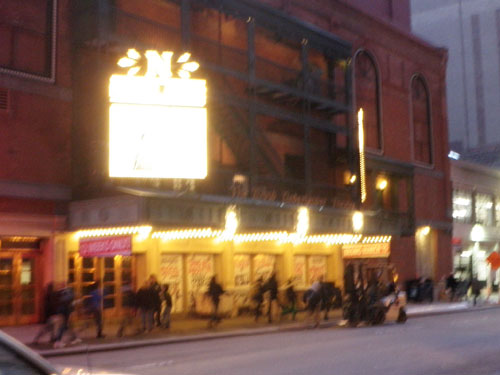 Wow, my night time photography really sucks, doesn’t it? You can’t tell by the glowing blob in the photo, but this was the theater where Newsies was scheduled to start playing. Newsies! I love me some dancing newspaper boys. My only regret about the timing of my trip was that I arrived before this production opened. <sigh> I liked walking through the theatre district which is packed with lots of restaurants, and you can’t seem to go a block without passing a theatre advertising some show. Which is why it’s the theatre district, duh, Jennette.

I was glad I made reservations at Becco because that place was packed. Seriously. I don’t know what the fire marshal would have to say about it. Maybe they bribe him with free pasta. There wasn’t a square millimeter to spare. My server took off at a fast pace, leading me to the very back of the restaurant, between narrow gaps between tables, past the kitchen, past the restrooms, around the corner and to the very, very, back corner. I could barely keep up with him, but he had bright red hair so he was easy to follow. (This is what the cryptic “follow the ginger” note I mentioned in a previous entry meant. Mystery solved! I use racist slurs against red-haired people.)

I was literally in the very back corner. We could have not walked further through the restaurant, though the servers preferred to fast-walk everywhere. I was amazed they didn’t stumble and dump a bowl of pasta on anyone’s head. And they did carry big bowls of pasta everywhere, serving people directly at the table instead of bringing out a prepared plate from the kitchen, which was kind of cool. I wish someone would do this at my house. The busboys were like pit crew members at the Indy 500. As soon as a table emptied, they’d swoop in, snatch the tablecloth and reset the table within a minute. The next time you looked up from your menu there’d be a new couple there. This place was the model of efficiency. 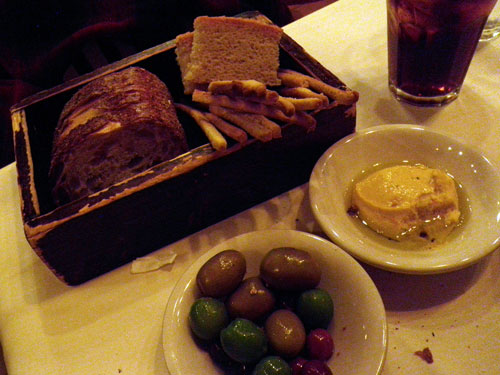 They also served the bread in a cute little bread box, which I loved! 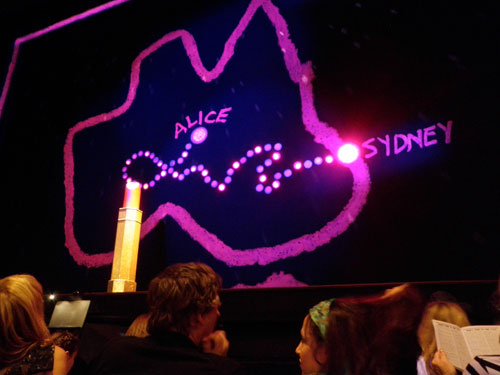 After my meal, I made it to the theatre and reveled in my third row seats. Thanks, Broadway Box! I went to turn off my phone and was alarmed that the inside of my purse was glowing. I eventually figured out this was because there were black lights on in the theater. (Thus explaining my other cryptic note about “black light purse” in that previous entry.)

As was expected, the musical was big, gay fun. There were lots of flashy costumes, a magical rotating bus, and very, very, very hot guys wearing little clothing. At the end of the show they dumped ticker tape on us, twice, which must make the janitorial crew love this production. When I got up to applaud, I stepped on something and realized it was one of the pink ping pong balls they tossed into the audience during one scene. They only threw out a dozen or so of these, so I felt very lucky! Not only that, but they’re customized just for this show. 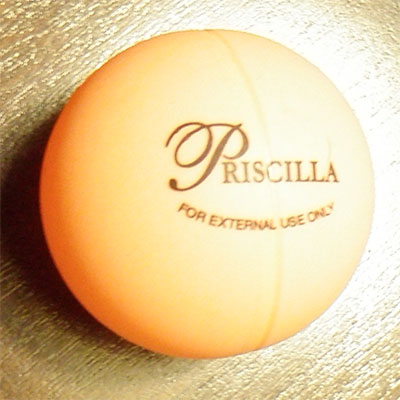 “For external use only.” Um, okay. Thank you for noting that.

The theater was right off of Times Square, which was bustling and busy even at eleven-something-o’clock. Being in Times Square at night is like living inside a Lite-Brite. There ‘s lots of energy there, and I’m not referring to the electricity it takes to light up the place. I felt like I was a part of something bigger than myself. I was also a part of this live video screen that literally made me bigger than myself. 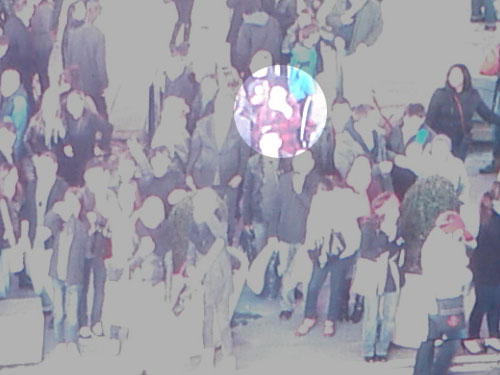 As I waited to take the subway back to the apartment, a guy standing near me on the platform started lighting a cigarette. When he didn’t turn off his lighter, I realized he was actually lighting a pen on fire. I also noticed the other subway riders had slowly backed away from him, creating an invisible sphere of crazy space. I did the same and prayed that the train would come quickly. I also checked “encounter a mentally ill person” off my list of things to do in New York. Seriously, though, I did feel bad for the guy. If someone acted like that in a small town, the community would do something about it. But in a big city people with problems like that just get ignored and disregarded. Not that I did anything about it. I’m part of the problem, obviously, not the solution.

Sunday morning I took a shared shuttle bus on a tour of local hotels and then eventually to the airport. I was happy to get home, and I believe the feline Fulda members were equal parts happy to see me and angry that I’d abandoned them for so long. I was surprised by how much time of my flight to and from the city was spent just getting on and off the plane or taxiing around the runway. It probably took up half the travel time, literally. This was also the first time I’d checked a bag for a trip since long enough ago that I can’t remember. But I was in the city for 10 days, so I figured it was worth the extra $25 each way, though I still resented having to pay an extra $25 each way.

I managed to do a lot in the city, but not everything I’d planned. I wanted to see the Union Square Market that was recommended by AmandaLP and Ilene, but it was only open on certain days of the week. Both days I had available to visit it were gray and rainy, so I didn’t bother. I also wish I’d gotten a chance to stop at the Mac store and get some advice on what foundation to use.

I did enjoy eating my way through the city, and yes, I definitely ate my way through the city. Guilty. I also walked enough that my feet hurt most days. I’ve never lived in a city with a subway system, but I love the convenience it provides, even if you run into people chewing on flaming pens every now and then. I also enjoyed watching TV in a place that runs ads for new Broadway shows, and not just the touring productions that happen to be in town. Another New York think I noticed was that most of the restaurants had tents outside their doors. I’m not why, though I’d guess it helps keep cool air inside during the summer and warm air in during the winter. Either way, it’s not something I see around Chapel Hill. I also decided on this trip that the margarita is my cocktail of choice. It tastes good enough that I don’t want to spit it out, but it’s also got enough liquor in it that I feel like I’m actually drinking. Oh, and it did make me drunk off my ass in San Francisco, which I’ll never forget (because it got me just drunk enough not to black out).

One of the best things about visiting a new city is that it gives me a post-vacation understanding of the geography of the city. Now when I see aerial shots of New York on TV I can map the view to the places I visited. This never goes away. There are few phrases I like better than, “I’ve been there!” Whenever I see shots of London or Paris I still try to map the locations to my memories of the area. That also means that I can’t see images of a city I’ve visited without remembering all the good experiences I had there. That’s what I like about traveling, that I get to lay memory tripwires in the places I visit that will be triggered at some unknown time in the future. The landscapes of my life are littered with these. When I visit my old home town I might see the bus stop I used to wait at after marching band practice or the shopping center that used to have the video rental place my mom would take us to every week. Those places aren’t just places anymore. They’re connected with invisible thread to the memories in my mind, tugging when I pass them by, pulling out experiences I’d forgotten I wanted to remember.

That’s why I travel.

Later: Answering this correctly would prove I *was* a robot
Earlier: The New York Diaries – Part 4: Lower East Side, Tenement Museum, Greenwich Village, and the Museum of Natural History
Home: Main blog index