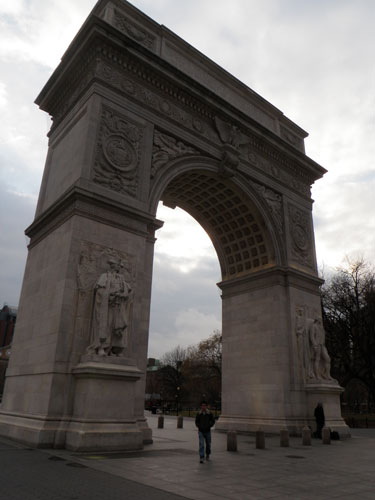 I was a big fan of the musical RENT in high school, so the best part of visiting the Lower East Side on Thursday morning was accidentally stumbling upon Avenue B and realizing, “Oh my God! This is where RENT happens! Is the Cat Scratch Club around here too?”

I did not find the Cat Scratch Club, nor did I seriously look for it. I did look for the Clinton St. Bakery because both Carol and Ilene said they’d cut a bitch for their pancakes. Ok, they might not have said it in those exact terms, but I think it was implied. I ate there on March 1st, which means I just barely missed visiting the restaurant during national pancake month. They hadn’t taken down their national pancake month signage yet, so I felt particularly disappointed, like they were rubbing powdered sugar in my wound and drizzling it with chocolate syrup. 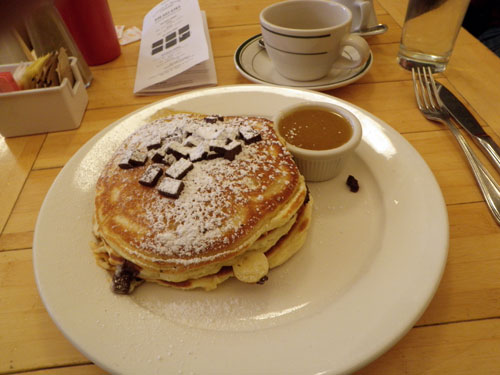 The pancakes were delicious, but I did experience a brief moment of terror when I tried to pay with a credit card and they told me they only accepted cash. Thankfully I’d made sure to bring a lot of cash to New York since I know cabbies prefer it. I don’t know what they’d have done if I’d been short on cash. I might have actually had to cut a bitch.

All the servers were wearing t-shirts that said LES, which perplexed me all through my pancakes. I almost asked them who LES was until my brain finally kicked in and I realized it stood for Lower East Side. Thanks there, brain. It was early in the morning so I guess I’ll forgive you.

The one thing that surprised me about the restaurant was how small it was. As far as I understand, it’s a reasonably famous New York restaurant, and I always expect famous places to be big, since they’re figuratively big, right? When I visited San Francisco, I was surprised by how teeny, tiny the Chinese Fortune Cookie Factory was. It was basically a hole in the wall, yet it managed to be listed on lots of tourist guides. I guess you don’t have to be big to be big. 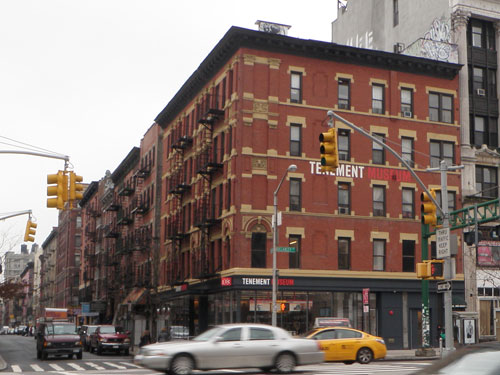 After brunch I headed to the Tenement Museum which was recommended by Wendy and Penny. The museum consists of two buildings. The gift shop is in the first one, which is where you buy tickets for a tour and meet your tour group. You then follow your guide next door to an old tenement building where they’ve restored each floor to what it would have looked like during different periods of history. There are several different tours and each one takes place only on one floor. I took the Hard Times tour that took us through the history of two actual families that lived in that building, one in the 1870’s and the other in the 1930’s.

For some reason I turned into the tour guide’s pet during this tour. Whenever she asked a question I’d wait about two seconds for someone else to venture an answer before I’d jump in. This is completely unlike me. In college you’d have to call on me by name before I’d answer the teacher. Since that time I’ve done several presentations at conferences and I know how horrible it is to ask the audience a question and be faced with total silence. So, in this situation I was like, “I’ve got your back, tour guide!” I had turned into one of those middle-aged students I remembered from college who were very involved and inquisitive, like they’d come to get an actual education or something silly like that. Those people always annoyed me, quite frankly, but now I can see they actually knew a lot more than I did even though they were the ones asking all the questions.

The first family we learned about on the tour was a German Catholic family who’s patriarch left them one day without telling them where he was going. This uncomfortably resembled my own family history, but at least my dad did tell us where he was after he got there, and we never had to declare him legally dead like Gumpertz family did. Score 1, Dad.

After the tour I took the subway to the area near New York University and Washington Square Park. It was another overcast, cold day, so my walk in the park wasn’t exactly a walk in the park. I also approached the park on the side where there was some construction and an ugly dog park, so I was seriously underwhelmed at first. I eventually found the much nicer part of the park which includes the archway that Harry drops Sally off at in When Harry Met Sally.

Then I strolled through the Greenwich Village area and had a cupcake at Sweet Revenge. This was different than other cupcake places I’ve visited because you actually sat down and were handed a menu. I’m used to just going to the counter and buying what’s in the case. They also serve liquor and food that isn’t cupcakes. I ordered the signature Sweet Revenge cupcake which is peanut butter and chocolate, and it was all right. I wish I’d come on a day when one of the more exotic flavors was available.

Next I headed to the Cowgirl Hall of Fame for drinks with my agent. I never cease to be amazed that I can type sentences like that without lying. I went for drinks! With my agent! Look at me, so fancy! It was close to Kids RX, a pharmacy for kids, which seemed exotic to me. I’ve never lived in a city that required that level of specialization in their pharmacies. 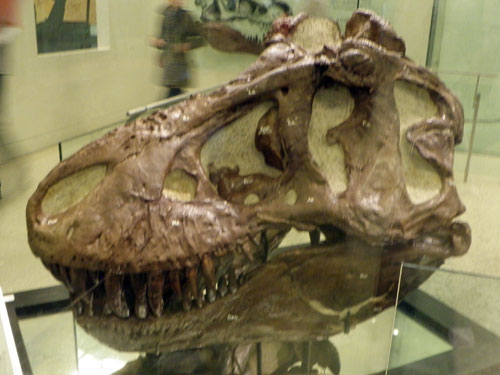 On Friday I decided to visit the dinosaurs. I hear they like to hang at the Museum of Natural History. I happened to arrive several million years too late though because they were all dead. Oh, well! I just looked up dinosaur on Wikipedia to see how late I was and it just hit me how freakin’ long ago this was. Not only that, but how amazing was it that this race of creatures survived for millions and millions of years? All of recorded human history only spans thousands of years. We are nothing! We are a blip! BLIP! That’s us.

Uh, so, anyway. The dinosaurs were cool, though I thought they’d be bigger. Don’t get me wrong, I wouldn’t want to encounter a living one of these things in a dark alley, or a sunny meadow for that matter. But I supposed I imagined them being five stories tall. I was probably more fascinated by the non-dinosaur creatures I’d never learned about, like this huge turtle thing: 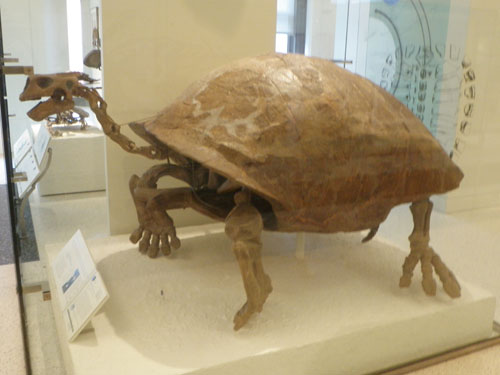 I’m lamenting the fact that I didn’t take more photos of stuff at the museum. At the time I felt it was a waste because basically anything you can photograph in New York you can find a better picture of by searching Google. The real appeal of personal photography for me is to get photos that I appear in, since I can’t find pictures like that on Google. But it’s harder to do that when you travel alone and get sick of harassing other tourists to take pictures of you. So I didn’t take that many photos on my trip. In retrospect, taking my own photos would have allowed me to post pictures of what I saw without violating copyrights. Lesson learned.

I also went to a planetarium show about the sun which was sort of disappointing because my mind kept wandering. I don’t know if that’s because it was boring or if I couldn’t focus because I was tired and dragging throughout the day. This was another day where I was tempted to crash at the apartment, but forced myself to go out because Oh My God I was in New York and I needed to see amazing things. The museum was only a few blocks from the apartment anyway, so it would have been silly not to visit.

I also checked out the meteorite and gems section because I like shiny things. And I couldn’t leave without seeing the big blue whale replica hanging from the ceiling in a room too dark for it to photograph well. I want to give big props to whoever designed the directory for the museum which looked like this: 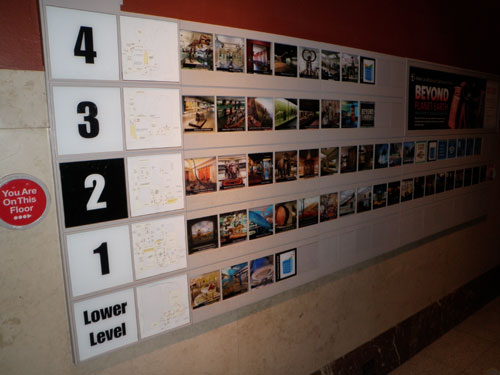 Instead of just writing the names of each area of the museum they posted pictures of what was there. It was much easier to use and kind of brilliant. I love me some good interface design!

In search of Pinkberry

After trekking around the museum I was feeling as dead as the dinosaurs. I decided to search for a Pinkberry on the way back to the apartment, which is a frozen yogurt shop of great repute. I thought it was pretty close to the museum, but I proved that theory wrong after several blocks. After I’d invested that much walking into my search, I was loathe to stop, so I kept on keeping on until I finally located it near the very busy and large 72nd Street subway station. (Google Maps says I walked almost a mile.)

When I finally got to Pinkberry I ended up accidentally ordering a parfait. I don’t know how this happened. It’s not like I was in France, and even when I was I managed to order a Kit Kat McFlurry at McDonalds despite my atrocious accent. By the time I realized I was getting a parfait I was like, ok, I guess I’m eating a parfait. Whatevs. It was good, but I don’t know if it was one-mile-out-of-my-way good. We have something similar in Chapel Hill called YoPop which is self-serve, so there are no parfait mix-ups.

On the way to the subway I dodged into a pizza place on impulse because I was starving, and soon found myself surrounded by teenyboppers. I’d infiltrated a popular tween hangout and wanted to un-infiltrate it as soon as possible. Having grown up in the suburbs, it seems odd to me that pre-teens just run around New York City on their own. When I was a pre-teen I was intimidated by big cities. I spent most of my time in my room because anywhere worth going required a car and a driver’s license, neither of which I had. But I guess this was just their neighborhood, and they are free to eat pizza where they will. It was not my neighborhood though, which I was starting to miss at this point, but I still had two days left in the city.