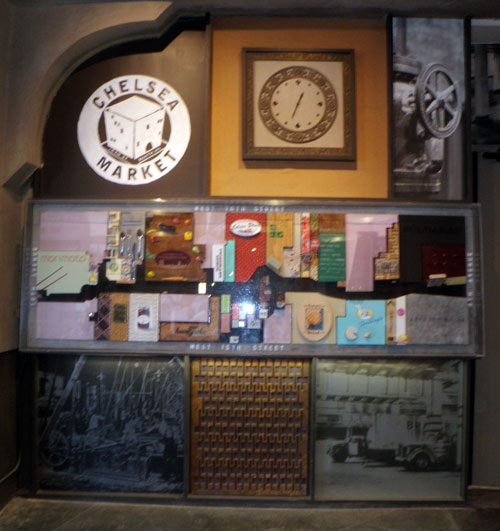 Tuesday morning I had to roll out of bed fairly early because the maid was coming. It must be nice to have a maid, but it’s not that nice to wake up early on vacation. Actually, it wasn’t that early, but my sleeping schedule was rather effed up that month, partly because of the medication I was on.

Anyway, I managed to get vertical, get dressed, and get out the door. I took the subway to the West Village area so I could walk the High Line, a raised walkway that used to be a railway. In that sense it reminds me of the Promenade Plantee I visited in Paris, but with less graffiti. It overlooks the Hudson River and in the summer it’s probably prettier than it was at the end of February. I had planned to walk the whole path, but it was an overcast day, chilly, and my feet still hurt from walking to Brooklyn the day before. I was also entering that period of mild depression I blogged about recently. All of that combined with the fact that I was sleepy made me say, “Screw it,” after four blocks, and sit my ass down on a bench for awhile. I may have been on the High Line, but I was feeling kind of low. After some rest, I ambled over to Chelsea Market where I was meeting my friend Rachel for lunch.

Chelsea Market is an old warehouse that’s now home to several shops and restaurants. It also has office space on the higher floors, some of which is rented by Google which I discovered when I accidentally checked into Google on Foursquare while I was there. Sorry, I didn’t mean to commit Foursquare fraud, it just happened. Chelsea Market sort of reminded me of the Stutz Building in Indianapolis which also used to be a warehouse, though the Stutz is used mostly for offices and doesn’t have more than 1 or 2 restaurants. They’ve both got an arty, indie, vibe. You could see this expressed in the directory for the building, which was a crafty, diorama that looked like something you’d sell on Etsy. It was beautiful, but it must be a bitch to update, so I hope they don’t have high turnover. Unfortunately it didn’t photograph that well, so make it less blurry with your imagination.

What I soon learned was that this was no ordinary warehouse. This was the old National Biscuit Company warehouse. Ok, that didn’t ring any bells for me either. Then l continued reading the plaque which told me that National Biscuit Company is the long-form name of Nabisco, and this was where they invented and manufactured the Oreo cookie. I was visiting the birthplace of the Oreo! Obviously, this made me very excited, though not as excited as if they’d still been making Oreos here. If so, I’m sure they would have let me dive mouth-first into a barrel of cream filling, right? As a consolation prize, Rachel and I split an Oreo cupcake after we had Thai for lunch, though she bought it before I’d told her about the prestigious history of the building. It was destiny! Also, she’s a cupcake blogger so I think she’s required to eat a cupcake a day or something. Rachel then walked me to my subway stop. On the way we saw this sign: 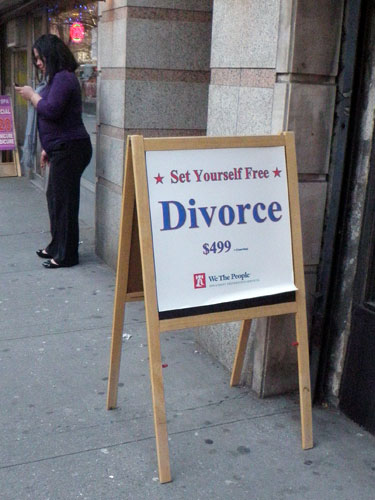 I thought it was hilarious that this sign was pitching divorce like it was an impulse buy. “Why yes, I think I’ll get a falafel at a street cart and then pop in for a quick divorce.”

I took the subway back to the apartment. The place was cleaner, but I couldn’t find my hat which the maid had hidden on the hat rack. Who would think to look there? I then took a nap. They city may never sleep, but I do.

I didn’t do anything productive for the rest of the day, which made me feel unbelievably lame as well as literally lame. I had over a week to spend in a fantastic apartment on the Upper West Side for free…and half the time I wanted to crash on the couch eating takeout. It’s so pathetic. Yet, I know I shouldn’t beat myself up over it either. Beating up sick people is not cool. Berating yourself about not feeling well only makes you feel worse. I’m chronically ill. Sometimes I have bad days. It’s important for me to take care of myself and rest when I need to so I’ll have more energy later. Still, it never ceases to be frustrating when you’re unable to do everything you want to do, particularly when you’re facing a limited window of opportunity. I wanted to run around the city and see everything I could, not just the inside of one apartment. But it just wasn’t happening that day, and it was better to go with the flow than to fight the current. Like Bruce Lee said, “Be like water.”

I know the chef(‘s sister)!

I can’t remember how I spent Wednesday morning and afternoon, but my educated guess is that I was working. That evening though I decided to traipse across town to visit Brasserie, the French restaurant where my friend Jen’s brother is a pastry chef. 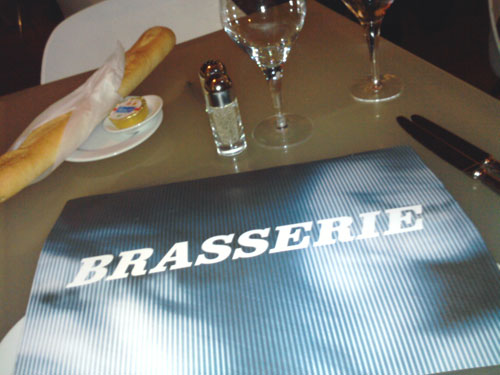 Brasserie is near the 53rd and Lexington subway stop, which I think qualifies as Midtown? Maybe? Am I totally wrong? I don’t know. It was dark and drizzling and I walked a block in the wrong direction before figuring out where the hell I was. I am jealous of those people in Australia who have a language that is incredibly direction specific, because I bet this shit never happens to them. I have seriously thought of buying a compass so I can head for the right subway exit instead of looping back around half the time. If you’re about to suggest that I use my smartphone instead, I can’t because it’s hard to get a signal in the subway.

When I walked inside the restaurant I noticed there was a coat check at the door, which was the first clue that this wasn’t the sort of place I typically visit. I’m more of a sit-on-your-coat gal, or a stuff-your-coat-at-the-end-of-the-booth gal. But hey, I was in New York, so it was time to be fancy and get my coat checking on, so I did. The restaurant was darkly lit and filled with people in business attire, which made me guess this was an after-work hangout for young professionals in the area. And I, fashion maven that I am, I was wearing jeans and a sweater. (One of these things is not like the other…)

I was alone, so they sat me at an inconspicuous table near the stairs, which was fine by me. I asked the server if my friend’s brother was there, but unfortunately he was at the other restaurant he works at that night, so I never got to meet him. I did text my friend to let her know, “I am in your brother’s restaurant, eating his food.” We then texted through dinner, which was almost like eating with someone, only much more pathetic because it looked like I was dating my phone. I do love my phone, and it does vibrate, but um, I’ll just stop there.

I did a lot of eating alone while I was in New York. Well, as alone as you can be in a restaurant full of people, which I suppose is even more alone than when you’re in private because the public nature of the situation brings attention to your aloneness. I was 80% ok with this. I’m aware it’s more socially acceptable and less pathetic to dine with someone else, and while I did meet up with some friends during the week, I didn’t have a companion available for every restaurant I wanted to patronize. Also, I am not the most social person on the planet. Meeting anyone for a meal except for my very closest acquaintances creates a small amount of anxiety for me, so sometimes I’m just like, screw it, I’ll eat by myself. And yes, I know this means I will die alone in a house full of cats. I am ok with this, and where else are all those little kitties going to live?

I had a burger and a martini, and then the server brought me a tray of delicious bite-size desserts, compliments of the chef. Yes, she actually said this! It was right up there with “Stop the presses!” as one of the top ten phrases I’d like people to say seriously to me sometime in my life. I think Jen texted her brother to let him know I was there, or he has spy cameras in the restaurant. I don’t know. When offered free pastries, I don’t ask questions. (Pssst, I would be very easy to poison.)

After my delicious dessert I took the Metro home. The funny thing about the Metro is that the first day I was in town it seemed intimidating, but after 24 hours I felt like an old pro. I had to transfer in the Times Square station, which is massive. It spans at least a city block underground and is bustling with lots of people. I smelled some smoke coming from one hallway and momentarily considered the idea that I might be trapped in Times Square Station during a terrorist attack, but it turned out just to be burned bread or something. I made it home alive, which I’m sure the cats appreciated. If I was going to die anywhere, I’d bet they’d have preferred I do it in the apartment so they could snack on my flesh after the kibble ran out.

My adventure continues on Monday…