You might have been wondering how those houseplants I bought a few months ago are doing. And if you were, I hope you’re not a member of the Society Against Cruelty to Houseplants. 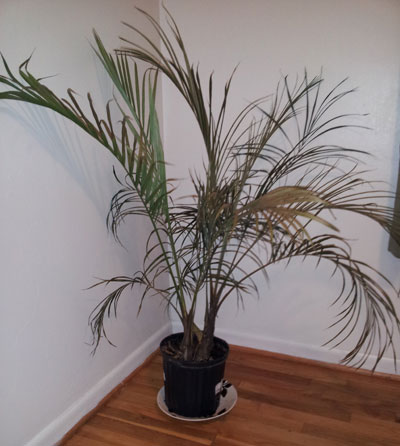 The fronds on this palm kept turning brown and dying for several weeks. Then one day I walked into my bedroom and felt like I’d discovered a plant suicide. It went from bad to beyond hope in about 24 hours. There’s still some green, so it could probably be saved by the hands of someone who actually knew what they were doing, who is obviously not me. This situation makes me think of how the human body will shut down less vital systems when its starved, like an anorexic girl who doesn’t get her period. The palms kept throwing off fronds in an attempt to keep the plant as a whole alive, until it passed a terminal point. It makes me feel like a plant sadist, quite frankly, and I hope plants don’t feel I guess living with chronic pain makes me more sympathetic to any kind of suffering. 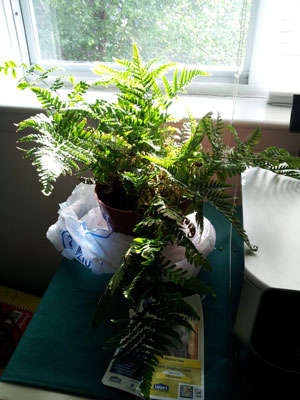 As for the fern, one day I walked into my office and noticed it had suddenly wilted. I thought it might be too far gone, but I poured some water and it and amazingly enough it had perked up by the end of the day. I guess H20 treatment is like plant CPR. 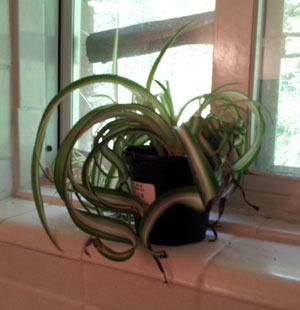 The spider plant is doing alright, though some of its leaves have turned brown. I was encouraged when it shot out the little feeler with baby spider plants on it over a month ago, but there hasn’t been much growth since then. I might need to transfer it to a bigger pot if I want it to grow.

I still haven’t bought proper pots for the plants, which probably displays a lack of commitment on my part or just my reluctance to spend more money when I’m getting by with what I have.

How do you get rid of a houseplant? I’d feel bad just chucking it in the dumpster. The Orange County trash and sanitation department might get mad if I do that too, since it’s clearly marked as illegal on the dumpster. Perhaps I can drop them off on the front door of a greenhouse, ring the bell, and run away like I was dropping off an unwanted baby at a church.