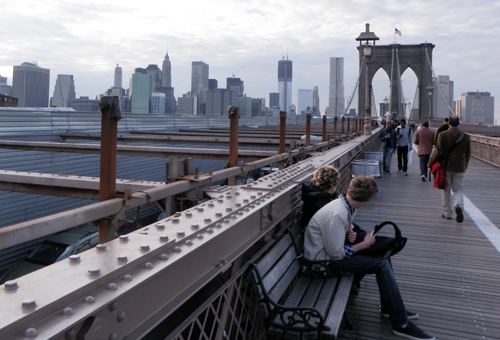 Getting there is half the challenge

No matter how many times I fly, I always lean toward the window to scope out the city as we land. I’m surprised everyone on the plane doesn’t do this. (Where is your sense of childlike wonder, people? You can’t buy it in Sky Mall.) Despite my superhuman LASIK vision or how far I leaned into the personal space of the occupant of the window seat next me, all I could see was white. Plain, solid, white. I started to wonder if we’d died mid-flight and were now soaring through the afterlife without knowing it. But no! About 20 seconds before we touched down the fog we’d been flying through cleared enough that I could see the ground.

I took a shared van into the city and couldn’t see the skyline at all, which would have been a huge disappointment if this had been my first trip to New York. Fortunately, I was too distracted trying to check into JFK airport on Foursquare to pay much attention anyway. I used NYAirportService.com to book a shared van into the city. They apparently book the reservation through Go Airlink Shuttle, which was sort of confusing because I wasn’t sure what color the van I was supposed to be looking for would be or how to find this van. When I got off the plane I had to find a panel of telephones in the Ground Transportation area, pick up one of the phones, and figure out the right number to dial to talk to someone from the correct shuttle service who would dispatch the van to my terminal, the name of which I did not immediately know. So, basically this was a complicated puzzle game and one of the reasons I will never, ever compete on The Amazing Race, because traveling STRESSES ME OUT. It’s hard enough to do this in English in America, let alone in a foreign country where my only way to communicate would wild gesticulations. After the shared van took me on a one-hour tour of other people’s hotels, I finally got off at Penn Station and took a Metro to the cats’ apartment. If I had to do it again, I’d probably pay the extra $5 or $10 for the drive to drop me directly at the apartment, though I did get to see a few fun things on the drive. We drove past the Simon & Schuster building, so I got to wave in the general direction of my publicist. And driving through Times Square on a cloudy day made it seem particularly bright and flashy.

Once I arrived at the apartment (that had a doorman, which made me feel fancy) Jasper and Zoey’s person gave me a Kitty Care 101 lesson. Then we went out for Italian food. (The humans. Not the kitties.) The first restaurant we went to was hosting a 13-year-old girl’s birthday party, so we told them to have fun with that and went to another Italian place a few blocks away, which is something you can do in big cities like New York. There’s food on every corner!

Working for the weekend

Now that I’d arrived at one of the major tourist destinations in the world, I decided the first thing to do was…work for two days straight on a sunny weekend! Because that’s how I roll: over. I rollover for my clients. This actually wasn’t as bad as it sounds for two reasons.

1) I got an insane amount of work done.
I’ve heard of writer’s retreating to artist colonies in an effort to isolate themselves from distractions and force themselves to work, and I’d heard about that guy from the band Bon Iver who went to some cabin in Wisconsin for three months to write an album, but that’s never sounded appealing to me. There might be something to it though. I got so much done you would have thought I was in a manic fugue state. I was away from all the familiar things I distract myself with, and I had a sunny desk to work at with this lovely view: 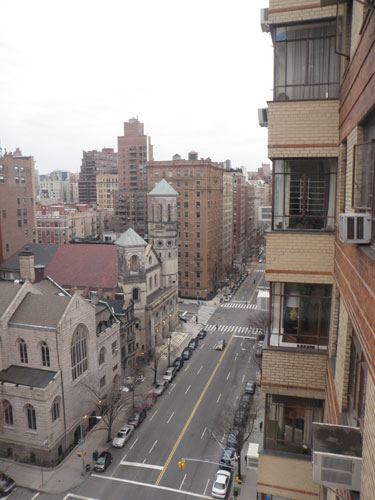 I’m not sure why “getting stuff done” is such a high, but I can’t imagine that cocaine makes you feel any better than answering all your emails and designing a complete web site in one day does. I think dopamine is involved, and boy is it good!

I also had access to cable, so I watched listened to the latest Star Trek movie and The Fugitive twice. I’d forgotten how often cable channels rerun movies and how easy it is to get sucked into their pull even when you’ve seen them so many times you don’t have to watch the screen to know what’s going on.

2) I got a sense of what it’s like to live in New York and not just visit it
Instead of staying in a hotel and rushing off to do touristy things right away, I was living in an apartment working like I do at home. I also had 10 days in the city, so there wasn’t a huge rush to see and do everything as soon as possible. This made the vibe totally different from other vacations I’ve taken. I was staying in someone else’s apartment using someone else’s Metro card living someone else’s life. But I got to go back home a week later, which was great because I got to experience change without actually having to change. And what did I discover?

I quickly became smitten with delivery food service. Using GrubHub I could order any kind of food I wanted late into the night. French toast at midnight? No problem! Then a daring delivery man would risk his life biking through the streets of New York to bring that food right to my door. It was awesome! I can get some food delivered to my apartment in Chapel Hill, like pizza or Jimmy John’s, but not the wide variety of stuff available in New York.

I know, I know, some of you are rolling your eyes and thinking I should have gone out into the city every night. But when you live in chronic pain you only have so much energy to spend in a day, and I didn’t always feel like trekking out into the urban wilderness to hunt and gather. I was also charmed by how the delivery food was packaged. No matter what restaurant I ordered from, the food arrived in metal pans with plastic lids wrapped in paper bags which were in turn placed in plastic bags. Only a tourist like me could find this exotic and enticing. I also earned a $10 coupon on GrubHub after I placed several orders, which made delivery food even more fun! I highly recommend the gyro at Telio’s.

It’s probably best that GrubHub is not available to me in Chapel Hill or else I’d never leave my apartment and all my muscles would atrophy except for the ones in my mouse hand.

No matter where in the world you travel, the grocery story is always a little bit weird, isn’t it? It’s never quite like the grocery store at home. For instance, the Harris-Teeter around here does not have an escalator, unlike the Food Emporium and the Gristedes stores I visited. The aisles are very close together because real estate is so expensive. They also don’t stock every product ever created like the superstores around here, so I wasn’t able to find the caffeine-free Diet Dr. Pepper that I prefer. Horrors! You could get a “litter” of soda though, though it wasn’t in the kitty litter section. 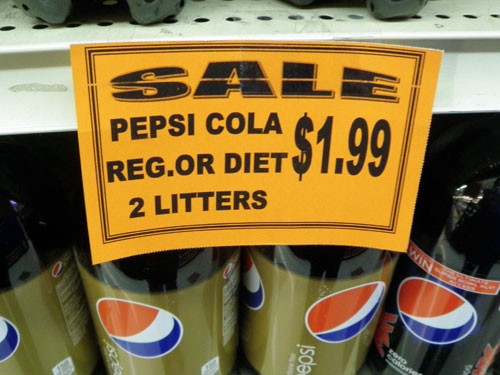 The labels also listed how much an insane amount of each product would cost: 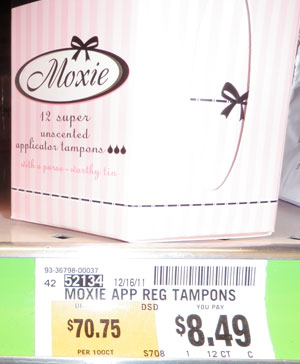 You know, just in case you wanted to get $70 of tampons. I’m used to the labels going the other way and letting you know how much a single tampon would cost, not 100 tampons.

Grocery shopping was much more of a pain, literally, because I had to carry whatever I bought several blocks up and up an elevator. I’m used to shuttling it out of the store in a cart, unloading it into the trunk of my car, and then the farthest I have to carry it is up one flight of stairs and through my apartment to the kitchen. This situation discouraged me from buying too much stuff at once, and definitely not much heavy stuff, so no matter how frequently I shopped I ran out of things pretty quickly.

Ultimately, any convenience I gained in terms of delivery food was paid for by inconvenience in my grocery shopping.

Otherwise, not that different

Otherwise, living in New York for a week wasn’t all that different from living anywhere else I lived. It was nosier noisier, but it wasn’t as intimidating as I thought it might be.

I first visited New York on a band trip seventeen years ago. I’m sure about that date because it was the week of the Oklahoma City bombings, a news story I COMPLETELY MISSED because this was before Twitter, and Facebook, and everything being in your face all the time, and because I was a teenager who didn’t watch the news anyway. I didn’t know what had happened until many days later when I was flipping through the TV channels (because this was when you had to flip through channels to figure out what was on instead of referring to a magical onscreen guide).

When I visited New York that time I was convinced everyone was a thief who wanted to steal my money, so I stuffed all my dollar bills in my shoes. The city was very big and overwhelming and I let the adults usher me around everywhere. The second time I came to New York was with my mom after I graduated college. The trip was her gift to me for finally getting a degree and for no longer sitting around her house unemployed and watching lots of anime on Cartoon Network. The city was still big and overwhelming, but ultimately I realized it was just made up of individual people and I could handle dealing with individual people, so perhaps it wasn’t so scary after all.

The third and fourth times I visited New York were for book promotions, so they were brief but exciting. After that I went to Europe and attended various conferences and gatherings around the country, which forced me to learn how subway maps worked, how to hail a cab, and basically get around the world. So here, now, on my fifth time visiting New York, the city did not seem very scary at all. I did not stuff money in my shoe once.

The city hasn’t changed as much as I have.

Coming soon: Actual seeing of sights and lots of walking!