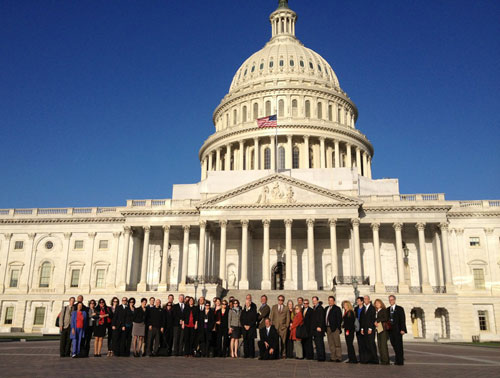 If I’d known it was going to be 32 degrees out as I walked from the DC Metro stop to the front of the Capitol building, I would have worn a coat. Instead I relied on the fiery passion of my convictions to keep me warm as I walked with almost seventy doctors, patients and other advocates taking part in Headache on the Hill 2012. Considering how numb my arms got, the coat would have been the better choice. (My fiery passion burns from within, not without.)

Everyone departed from the hotel at 7:00am so we could take a group photo in front of the Capitol before dispersing into our state-based groups for the day. That’s right, seven o’clock in the morning. The AYE-EM. Which means at 6:00am I woke up in sweaty, panicked confusion to the sound of my phone’s rooster alarm. Cocka-doodle-do-you-remember-why-you’re-getting-up-so-damn-early?

Anyway, I made it there on time and was milling around the seat of our nation’s power when this happened: 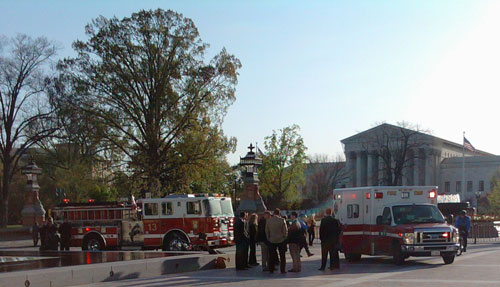 That’s right! Someone managed to go down before we’d even taken the group photo. Thankfully she was surrounded by enough PhDs to make a hearty meal of alphabet soup, and boy could they run! As all the doctors in our group flocked to the fallen woman’s side, I decided it was best for me to stay out of their way. I never did get the full story on what happened, but I heard the woman was ok.

After we took the group photo, the four of us from North Carolina had breakfast in the cafeteria of one of the Senatorial office buildings. The Capitol building is where the sessions of Congress meet and vote, but each representative has an office in one of the buildings to the north or south of the Capitol. Senators are on the north side and Congresspeople on the south. The distance back and forth between them is about one third of a mile. You walk by the Supreme Court on the way, which is where this was going on:

People were demonstrating on the second of three days of arguments before the Supreme Court about the constitutionality of the health care reform legislation. It was like that Le Tigre song New Kicks up close and in person! Everyone behaved civilly and the protests were interesting to watch during the down time between our meetings which didn’t start until 11am. That’s right, I dragged my ass out of bed at an unGodly hour so I could be in a photo and then hang out in the Senate cafeteria for a few hours. At least it gave me a chance to recharge my phone. I also got to chat with some of the other attendees, from an 18-year-old headache sufferer to the founder of Migraine.com. I also got to know the people in my group better and gave some of them impromptu tweeting lessons.

The two guys in my group were headache doctors, one of whom was the neurologist for the other woman in our group who was also a doctor and a migraine sufferer. Earlier I’d asked her where she worked and she told me she was in between jobs. I soon learned this wasn’t because she’d fallen on hard times but because she had recently sold the drug company she’d founded that had made a breakthrough in Hepatitis C research. I was happy to let her pay for my coffee! She made it through the many walking miles of the day wearing two-inch heels, which must be a skill she learned as a former vice-president of a major drug company. I did the best I could to dress professionally and wear flattering makeup, but I felt a bit schlubby next to her. At least I didn’t split my pants like one of the guys in our group did. Whoops! Thankfully he was wearing a long sweater and didn’t moon any Senators on the way out of our meetings. We’d like for them to remember us, but not for that 🙂

We had four meetings that day spaced evenly apart with a break for lunch. The meetings were all fairly similar. We arrived a bit early at each office where I took a photo in front of the representative’s plaque: 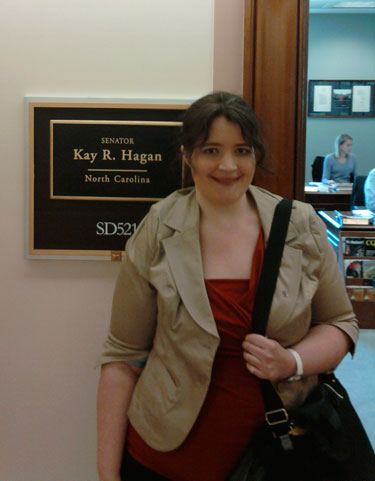 Each office had a basket of North Carolina Peanuts available which were tasty and informative too since I didn’t even know we were known for our peanuts.

And at Senator Hagan’s office I got to stick a pin in the map for the place where I lived. 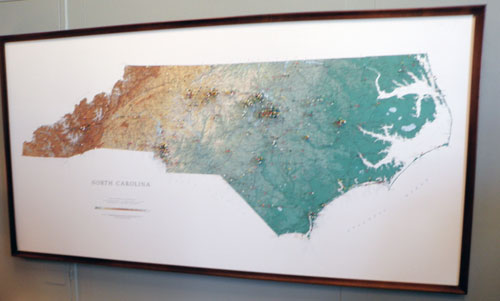 At each appointment we met with a staffer who’d been assigned to take our meeting. Confession: during these four meetings I didn’t meet a single Senator or Congressperson. I did see two of them coming or going, but the ones we had been scheduled to meet were away voting during our typical 15-minute long meeting. That’s just how it goes, and honestly it made me less nervous to talk to a staffer who was about my age than to an elected representative. That said, my face still got warm when I got a chance to tell my story at a speed approaching that of the Micro Machines spokesperson.

When one of the doctors started talking about which buildings had the best cafeterias, I was like, “Hey, you’ve been here before, haven’t you?” It’s not like the Congressional cafeterias are on Yelp. (Are they?) He’d attended 4 out of 5 of the total Headache on the Hill events in the last five years, which made me feel a lot more comfortable in these meetings. He already knew many of the staffers and was more familiar with the details of our requests. That allowed me to focus on telling my story and making a personal appeal for progress on this issue. In turn the doctors liked having patients with them because when doctors ask for more funding it can seem like they’re motivated by money for their projects and personal career advancement. Having two headache sufferers plead our cases put a human face on the issue.

Interestingly, our meetings got progressively better during the day. The first staffer we talked to had a mean poker face and we didn’t get much of a positive or negative reaction from her. Honestly, she seemed a bit bored and I had to wonder how many meetings like this she takes in a month. The second staffer responded in interest to the copy of my book I dropped off at the office, which I did in each meeting. (That totally made this a Capitol Hill book tour. I can write it off on my taxes, right?) But she was non-committal about getting anything actually done. The third staffer was an old friend of one of the docs and by that time I’d gotten better at telling my story, so we seemed to have good chances there. The final staffer has a sister with Migraine disease, so she was very sympathetic to our requests.

The next step is to follow-up with the people we met, which I’ll be doing in a week or so via email. Overall it was a good experience and something I’d consider doing again. It was fascinating to walk through the buildings where people as powerful as they are dysfunctional do business. We’d be wondering down a hall (one of the oh, so many halls) and suddenly you’d see the plaque for Nancy Pelosi’s office or you’d stroll by the office of a former presidential nominee. It’s surprising how easy it is to get into the office buildings too. No ID is required. You just have to have your bags x-rayed while you walk through a metal detector. If you’re wearing metal-tipped shoes, please take them off please as the other woman in our group learned.

All the office buildings are connected via tunnel, so once you’ve gone through security in one you can get to all the others. There’s a maze of hallways and tunnels that seem to go on forever, so it can be easy to get turned around. We managed to get everywhere on time (sometimes just barely). I wished I’d checked my Gmail in between meetings because it turns out that one of my readers was a staffer I would have liked to have met. Maybe next year!

Big thanks to the ADHA for planning this event and for paying for my hotel room for one night. It’s given me insight into how much work and planning goes into advocating for issues. Just scheduling meetings for sixty-some-odd people must have been a, dare I say, headache? Hopefully we helped make some progress! If not, at least I got some peanuts out of the deal.