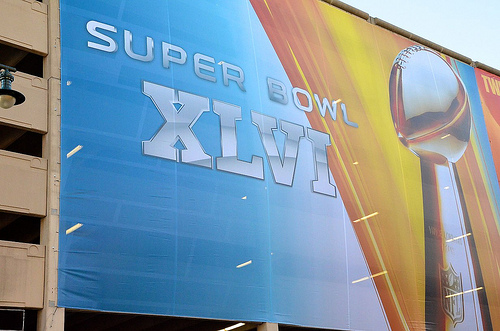 All photos in this post are by hubsterdisney from thisphotoset which is CC BY-NC 2.0 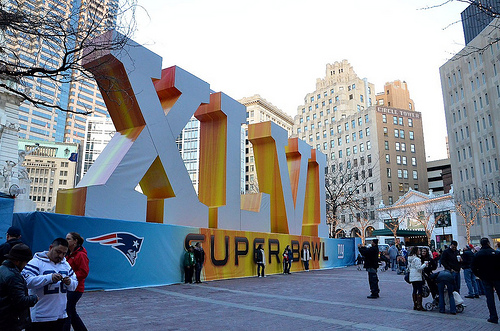 Indy has been prepping for this event for years, and you could hardly go a month in that town without hearing something about it on the news. They expanded the convention center and even built a shiny new hotel. (Literally, very shiny.) But it wasn’t until I saw the photos and videos published this week that I started to comprehend that the Super Bowl isn’t just about dozens of hulky men running around a fake grass field. This is, like, a FESTIVAL.

I lived in Louisville, Kentucky for eight years, so I am no stranger to the Derby Festival that runs for two weeks, a somewhat absurd amount of time to spend revving up for an event that takes about two minutes to complete. But hey, they shoot tons of fireworks off the Ohio River and there’s a balloon race that’s usually cancelled for weather and even a half-marathon that detours onto the track at Churchill Downs, so a good time is had by all.

The Super Bowl is evidently the same sort of event, something that gives the city an excuse to PAH-TAY! They started closing downtown streets and setting things up over a week in advance of the game. There are too many concerts and live stages for me to count. They’ve installed tons of heat lamps on the street, which I wish they would keep up indefinitely. (After all, I am the woman who moved 600 miles away to escape the cold Indiana winter.) To add to the confusion, streets are now sporting new signs naming them after football teams. 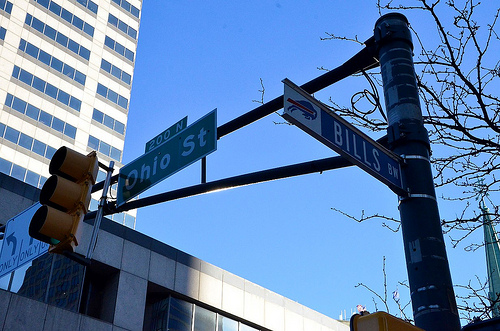 There are 36 Indy racecars lined up on Meridian Street, each one skinned with the colors and logos of an NFL team. Around the corner from that Jimmy Fallon is filming his show live from Indy all week. I also learned the downtown Nordstrom’s had closed because they’re now using the space as a “Huddle” spot to warm up at if you’ve gotten cold wandering around the blocked off streets. Or you can get your blood flowing by jumping in a huge hamster wheel and attempting to run 100 yards for the win. 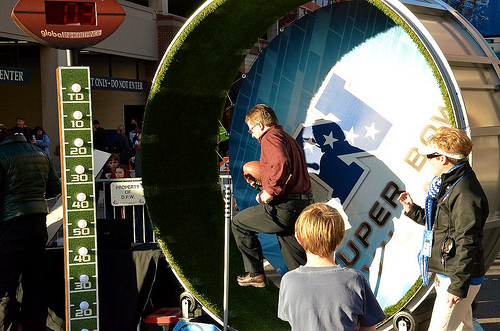 The biggest attraction appears to be the zip line they’ve set up on Capitol Avenue, a street that they’ve covered in Astroturf and renamed Touchdown Alley. Zip lines are the trendy new thing that have popped up in places like the Vancouver Olympics and in Las Vegas on Fremont Street. 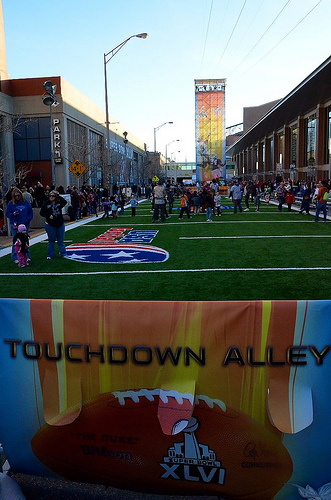 I used to drive down Capitol Avenue every day on my way home from work, but never once did I think, “Geez, I really wish I could zip line home instead.” Obviously I wasn’t being creative enough in my mode of transportation. I bet it’s rather cold zipping across downtown like that, so I hope everyone is bundled up under their safety helmets. That is, if you can make it to the top of the stairway. View a video of an Indy Star reporter zipping down the line here. 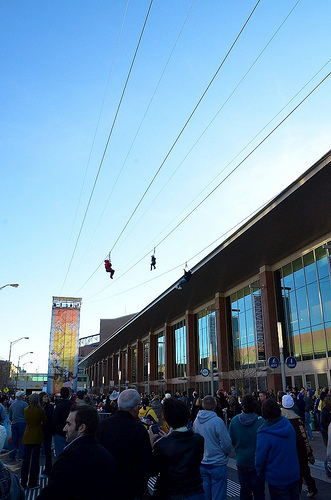 Indy really is a nice town, and if it didn’t get so effing cold and grey in the winter I probably would have stayed there. The stadium and convention center and hotels are all close together downtown, so you can walk anywhere you need to go. Which is good because you won’t be driving. The traffic must be crazy right now, so I’m glad I don’t work downtown anymore. Under normal circumstances I would often got annoyed by single lane closures for construction, and there was that one time my route to the Tea Room was totally blocked by a gay pride parade. They’ve even blocked off several roads near my old apartment in Broad Ripple, which was already difficult to get to because of narrow roads and heavy pedestrian traffic. I guess that’s what happens when George Clinton & The P-Funk All-Stars perform at a stone’s throw away from the trail I used to run on.

Before I saw all these pictures of the festivities I was glad I wasn’t in Indy anymore because I wouldn’t have to deal with the traffic and a city so packed that people were renting out their houses to strangers for big profits. But now I have to admit I’m a bit bummed that I don’t have a chance to see all the crazy up close and personal. It’s made me think that I make far too many decisions in my life based on traffic. Perhaps it is worth idling in a car for an hour to experience certain things. My hatred of gridlock is pretty strong though. Maybe I can start taking a zip line every where instead.