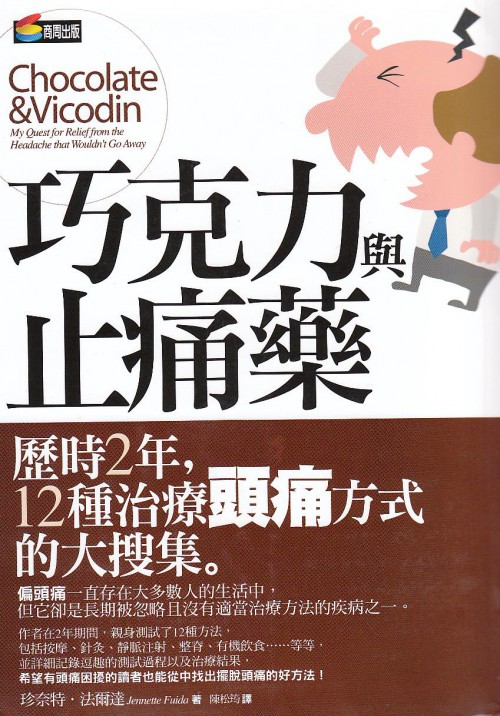 Whenever I receive a package I’m not expecting I assume it’s a bomb. Or anthrax. Or a pig’s heart. (You won’t think I’m so silly when I’m killed one day by an anthrax bomb hidden in a pig’s heart!) So when I opened the package that had been left under my welcome mat I was deliriously happy and surprised to discover that it was the Chinese version of my book, Chocolate & Vicodin. I started hollering, “Yes, yes, yes!” to myself so loudly that my downstairs neighbors must have thought I was getting some Valentine’s Day lovin’. Ever since the translation rights sold last year I’ve been curious to see what my book would look like printed in Chinese characters. How they would translate “Angerballz” in my acknowledgements section? I started to flip through the book to see, and that’s when I noticed it.

This book was illustrated! 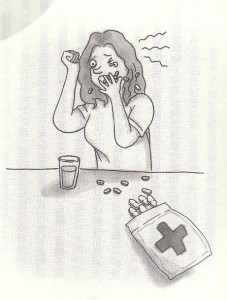 The beginning of each chapter includes an image depicting the content of that chapter in hilarious, overly-literal fashion! The story of my life had been illustrated! I do believe this is THE MOST AWESOME THING EVER. The girl even sort of looks like me, if I were thinner, never changed my clothes, and had boobs. In chapter one above I’m chomping on pills that look like baguettes, one of which has blinded my left eye, while I’m either shaking my fist towards the sky or trying to knock myself out with an awkward right hook. This totally happened, I’m sure. I just don’t remember it because of all the pills I took. 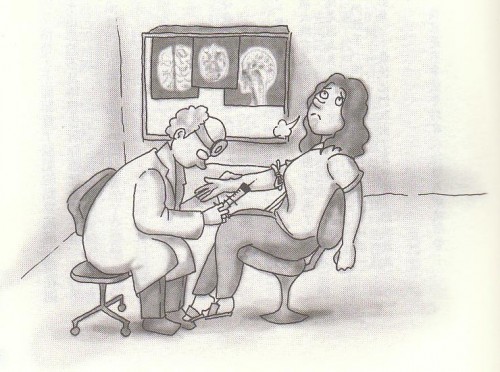 I love that the doctor in this one is wearing one of those weird shiny, metal circle thingies like no doctor I have ever met. I will give the illustrator realism points for the MRI films in the background, though I can’t tell if they captured my venous angioma in proper detail. 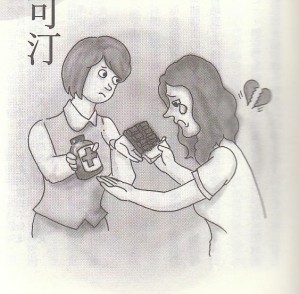 Hey, it’s chocolate and Vicodin! Just like the title! This should have been the cover, right? 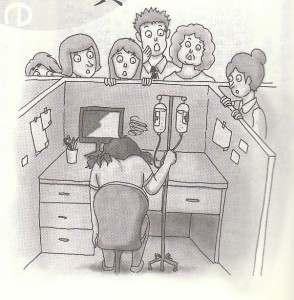 I want to send this to my old work friends and ask them which coworker they think they are in this illustration. I also love that the illustrator thought I brought an entire IV stand to work when I actually just had a lead inserted in my hand for treatment at home. I bet I would have gotten a lot more sympathy if I’d dragged the whole stand around! Good thinking! 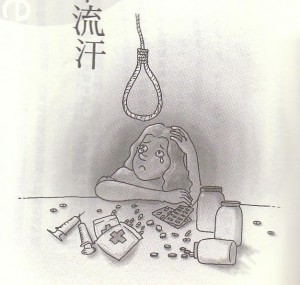 I know I am totally twisted, but this illustration had me laughing forever. I don’t even know how to tie a noose! 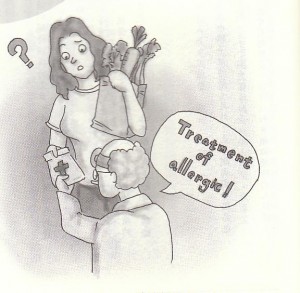 This image gives me great faith in the quality of the translation for the rest of the book. 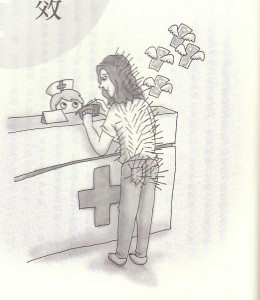 The acupuncture picture is tied for first as my favorite. I don’t know which part I love more, that I’m a porcupine or that my money is flying away on wings. Does this mean the value of the yuan is rising? 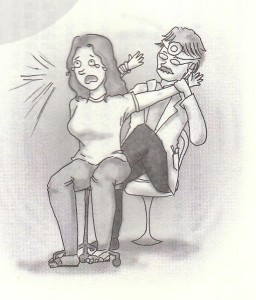 I should send this picture to my old chiropractor. I’m sure he’d love to have it framed for his office. 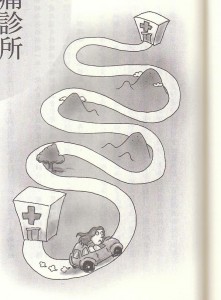 Evidently the road to my headache clinic wound through the mountains. And I drove there with with my head out the car window. On the wrong side of the car. 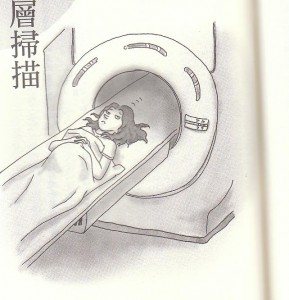 This image is the best actual depiction of what I went through. That look on my face? That was TOTALLY how I felt after a year of all these effing tests the told me nothing worthwhile. 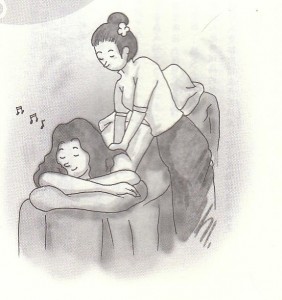 It’s interesting that the massage therapist is depicted as being Chinese, whereas the acupuncturist was somewhat indistinct. It makes me wonder how they translated my thoughts on Eastern medicine, and what any Chinese readers will think of my views on Western and Eastern medicines. At least it looks like I’m having a good time! 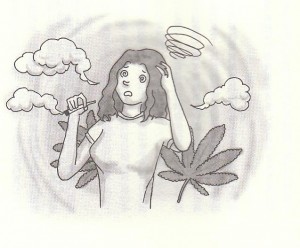 Here is the other image that is tied as my favorite. I think I’ve found a new profile picture! I love the swirligig eyes! 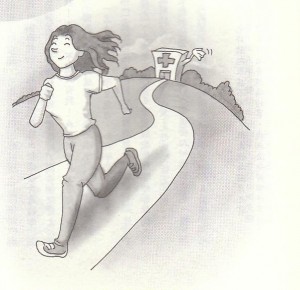 I like how triumphant this picture is, but I’m probably running away because the clinic HAS AN ARM. Creepy!

So there you go! The story of my life in images. If the illustrator of this book ever stumbles upon this post, I want him or her to know that in all honesty I love, love, LOVE, these images. No sarcasm. I love it in the same way I love the opening of Katamari Damacy or the Mr. Sparkle commercial from The Simpsons. I love that there is some weird, alterna-world version of my book out there. I can tell that the illustrator really did read the book, or they at least received notes from someone who did. I’m particularly charmed that the girl looks sort of like me, so I’m guessing they had my author photo to work off of. If not, good guess you guys!

I had been having a rather crap day because my headache has been partying rather hard in anticipation of its four-year anniversary in two days, but as soon as I got this book I was instantly ecstatic. It made my day. My week. Hell, it made my month. It is truly one of the most awesome things I have ever received. Thank you, thank you, thank you!

I’m not sure where in China this book will be available. I’d like to imagine it in bookstores or airports or little news stands. Maybe workers at Foxconn will read it in their barracks while they’re suffering from horrible headaches caused by those toxic chemicals they inhale so we can buy iPhones at affordable prices. I dunno.

I do know that I absolutely love this interpretation of my work. I love that you read it backwards, like a Japanese manga. I love that there’s a bizarre clip art image of an angry man on the cover trying to eat the title. I love that there is an ad for a book on how to pass the GMAT on the inner flap. I love it all.

Someone on Twitter suggested I have these images framed, and I am so down with that. I received six copies, so I can cut one up in the name of home decor. It looks like this might be the purchase page on the Chinese publisher’s web site if you’re dying to get a copy. I’m sure they’d be happy to watch your money fly toward them on wings.