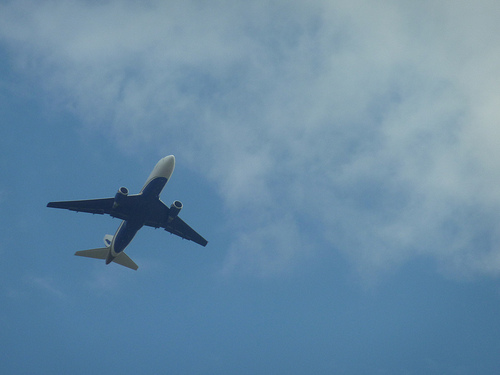 I feel privileged to live in an era in which we have machines that fly. Every time I travel on an airplane I think about how jealous my ancestors would be that I can travel halfway across the country in the time it probably took Pheidippides to run the first marathon (and then fall over dead). I also think about how surprised my ancestors would be that we’re able to take something as amazing as manned air travel and view it as a total pain in the ass.

Granted, I am frequently one of those people, usually when I can’t find an outlet to charge my dying phone in the airport, or when the line to board the plane is at a standstill because someone is trying to cram their bag into a too-small overhead compartment. Just like anything miraculous, it becomes dull once it’s commonplace. I’m sure the people of the future will view their weekly business trips to the moon colonies with similar tedium.

All that said, I took five flights this year which is record for me. I know some of you take at least five flights a month and are not impressed. It was notable to me though, and here are some of the things I’ve notice about air travel and all its banal miraculousness in that time.

1. Always book early enough to get the direct flight
There is a direct Delta flight from Raleigh-Durham to Indianapolis, but I didn’t book it early enough for my Christmas trip home. It was full, so I had to take a connecting flight through Charlotte, NC on the way there and through Reagan National Airport on the way back. On the positive side, I flew in a larger jet for one leg of the trip which had more leg room than the regional jet on the direct flight. On the down side, the seatbelt was shorter and barely clicked which is probably one of the universe’s ways of telling me to lose the damn headache weight already. As nice as the plane was, we literally spent more time getting on and off of it than we did in the air which seems sort of ridiculous.

On the bright side, I was able to check in on Foursquare at two new airports which earned me the Jetsetter badge. Yay for accomplishments that don’t require you to actually accomplish anything!

2. Beware the Potbelly Sandwich Works at Gate 27 of Reagan National Airport. They’ll give you a $2.00 bill in change
If you’re not from the United States, you might think getting a two-dollar bill in change is no big deal. Wrong! Although it is legal tender, Americans don’t commonly use the two-dollar bill. Cash registers don’t have a partition for them, and if you hand it to a cashier they will probably give you a funny look as if to say, “Seriously? You’re giving me a two-dollar bill?” I wouldn’t be surprised if some people took it for counterfeit.

The two-dollar bill has Thomas Jefferson on it, so the only other time I’ve gotten one in change is when I visited Monticello, his estate. I can only guess that Potbelly gave me one because I was in Washington DC and they like to get all patriotically weird with their currency. I had to make a connecting flight, so I didn’t notice they’d slipped me one until I’d arrived home. I didn’t want to force this weird currency onto my barista for fear of forever being marked as that-customer-who-gave-us-a-god-damned-two-dollar-bill. So I deposited it at the bank along with a few checks, and thankfully the teller didn’t give me any shit about it.

3. Fly US Airways through Reagan National and you’ll take two buses, two flights of stairs, and an escalator just to get to your connecting gate.
After Potbelly slipped me that two-dollar bill, I headed for the gate of my connecting flight. I’d reviewed the terminal map printed in the flight magazine of my first flight and knew exactly how to get there, because I’m over-prepared like that. 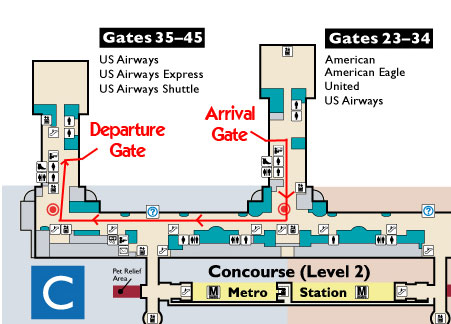 Well, that was until I hit a security blockade on my way out of terminal. See the little red dots in the map above? Yeah, those represent TSA checkpoints. I think they would be better represented by fat red dotted lines or huge skulls and crossbones, but I’m not the map maker. 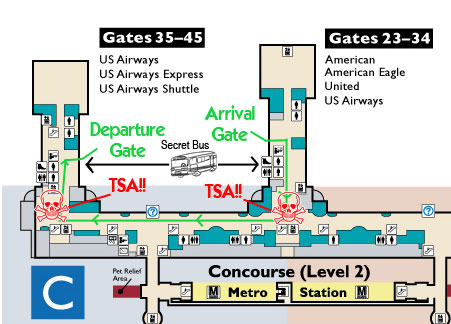 I asked a TSA agent how I should get to my gate and he pointed me to the line for the shuttle bus which was not prominently marked in any way. I had strolled right by it without noticing what it was. I then had to wait in line for 10-15 minutes until I got on the second bus which I got to by hauling my suitcase down a flight of stairs. I don’t know what disabled people do. Anyway, the bus drove across the tarmac to the other gate and I got off and hauled my suitcase up another flight of stairs. I found my gate and then I had to go down an escalator to get in line to get on another bus. This one drove us away from the terminal to a spot on the tarmac where several regional jets were sitting. We got off and had to walk up the stairs directly onto the plane like this was the fifty’s or something. By the time I reached my seat I felt like I’d wandered the desert for 40 years looking for the promised land.

So, like I said in item number one above, get the direct flight! There was absolutely nothing direct about my trip.

4. Leaving your cell phone on will not, in fact, cause the plane to crash
All this nonsense with the bus, stairs, and escalator must have fired up my rebellious side because I decided to leave my cell phone on during the flight home. I am reckless and love to play fast and loose with other people’s lives like that. The plane did not crash. You’re all shocked, I’m sure. On a previous flight I started listening to my MP3 player after we’d been waiting ten minutes on the tarmac in line to takeoff. Again, I lived to type this blog entry about it.

5. I sort of hate people who walk through the airport looking perfectly coiffed
Whenever I see someone strolling through the airport with perfectly pressed pants, cute high-heeled boots, and not a hair out of place on their head, I want to walk up to them and ask, “How do you do it? How? How?!” I can’t manage to look that good in my daily life, which does not involve joyrides around the tarmac. How can they do it when they’ve gotten out of bed at 4am to catch a flight where they’re crammed next to strangers who may or may not have BO? If I knew their secrets I think I’d be much more successful in life in general.

6. I have no idea what to do with my frequent flyer miles
I’ve signed up for each frequent flyer plan offered by each airline I’ve flown, but I have no idea what to do with them. Can I transfer them all to one airline? Can I hand my info to someone and have them figure it all out for me? I feel like I flew enough last year that I should have earned a small trip somewhere, but I lack the knowledge or motivation to figure this crap out.