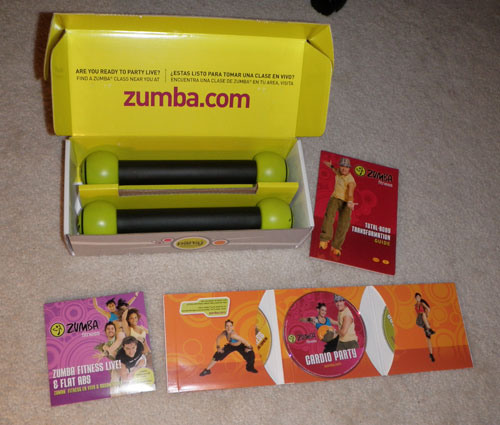 Last year I said I’d try a Zumba class as part of a Commit to Fit challenge…and then I didn’t. It wasn’t because of fear of commitment; it was because I developed tendonitis. I’m surprised no one called me out on my failure to Zumba. Seriously, very surprised. I guess all the mean people forgot to read that entry.

My foot is finally better, so I decided to accept an opportunity to review the Zumba Fitness Total Body Transformation System DVD Set which is featured in this month’s Yahoo! Shine Get it Guide along with three other fitness DVDs. A new Get it Guide is published every two weeks and showcases “the things women are searching for and talking about.” The latest one is all about Fitness DVD’s. I chose to review the Zumba DVDs because Zumba’s got a reputation for being a fun aerobics class that is based on Latin dance moves.

I was expecting to get a DVD in the mail, like I’d subscribed to Netflix: PR Division, but instead I got a box that contained four DVDs, a guide booklet, and two maracas toning sticks. So, woah! I hadn’t even opened the DVDs and I was already in for more than I’d bargained for.

The Total-Body Transformation Guide
The package comes with a booklet that contains an overview of what Zumba is, a stretch guide, a weekly workout schedule, and a sample weekly menu with recipes for each day. I suppose that’s why this is a “Total Body Transformation System” and not just a fitness program. I know a lot of newbies prefer to be told what to eat and how to exercise each day, so I’m sure they’d appreciate that. The booklet contains a Spanish translation and all the DVDs have an optional Spanish audio track, which is a nice touch since Zumba is rooted in Latin dancing.

DVD 1: Zumba Fitness Basic and Zumba Fitness 20-Minute Express
I popped in the first DVD and started working through the Zumba Basics class. Then I took a break to roll up my carpet and reveal the hard wood floor because it was hard to swivel on the rug and I didn’t want to break an ankle. Then I looked at where the rug had been and took a sweeping break. (Has anyone created a Work Out While You Clean fitness program? If not, I totally call dibs.) After I put away my broom, I started working through the basics class again. And kept working. And worked some more, until I picked up the remote and hit the display button to discover the basics class is 60 minutes long! (Technically it was 58 minutes and 10 seconds, but close enough.)

The length of the basics class is a bit overwhelming. I don’t want to train for the Royal Ballet here, I just want to Zuuuuuuumba! Despite the length, I actually like the way the basics DVD breaks down each move in an EasyBeat 1-2-3 format. First the instructors do the move at full speed and make it look like something I could never do. Then they slow it down and simplify it for Easy Beat 1. Then they add some complexity in Easy Beat 2. Finally you’re doing the full move you never thought you could do at full speed in Easy Beat 3. I learned better this way because they didn’t just slow the moves down. I eased my way up from a simple version to a more complicated version. If you’ve ever played a video game, it was like playing the first part of the game that’s a training level. It helps you learn the controls until you feel comfortable enough to get into the real game play. The real game play was the other program on the first DVD. It’s called Fitness 20-Minute Express and it literally strings together all the moves in the basics class at full speed.

It’s interesting how the costuming and staging of a DVD gives you information on what the attitude of the program is. My Pilates DVDs have a calm vibe and are filmed in a quiet studio or a zen garden. The Zumba videos have a party atmosphere where people are clapping and happy and having fun. They even had live drummers. At first I thought some of the instructors were working out in cargo pants, but upon closer inspection I think they were just baggy workout pants.

DVD 2: Zumba Fitness Cardio Party
The second DVD contains a 50-minute program that focuses on cardio. I really liked the graphic overlay that appears at the beginning of each set telling you what moves you’ll be performing. This helped me prepare mentally for the routine instead of just jumping into a move with no prior warning. 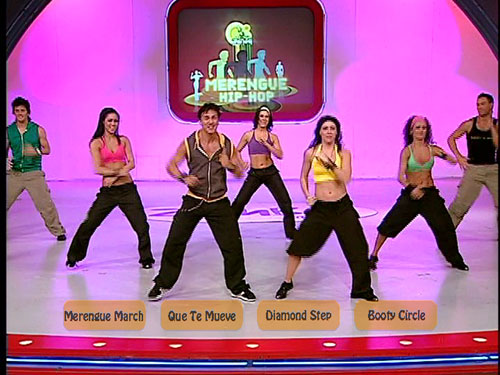 The only thing that annoys me slightly (and this is true of most workout videos I’ve tried) is that instructors make everything look so damn easy. They flit and float and bounce around like they’re on a trampoline. I cannot bounce like that! I have more mass and it takes more time and more energy to move it. I also have bad knees, so I backed off on a few of the moves that included small jumps. And even though I pretty much despise my downstairs neighbors who fill my apartment with loud noises and gross smells, I still felt guilty for jumping around my living room when I knew they were home. I wish I were nastier!

Oh, and the other thing that annoys me slightly is this: 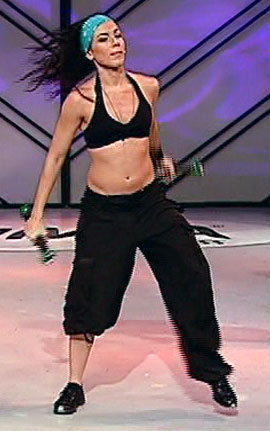 Why does this woman have only one pant leg rolled up? What is with that? I saw it once in the Vanessa Carlton video for White Houses and thought it might be a ballet-dancer thing. The asymmetry of it bugs me. I think I hate this fashion trend even more than I hate ponchos, and I really hate ponchos. (No offense, Latin America.)

DVD 3: Zumba Fitness Sculpt and Tone
The third DVD contains a program that helps you “shimmy and shake your way to super-sculpted shape.” This program uses the Toning Sticks which are one pound each, so I doubt they’re accomplishing much toning. The sticks have beads inside them, so when you shake them they sound like maracas. There’s an info sheet included that tells you only to use the Toning Sticks as intended, which I think was legal speak for “Don’t whack your brother in the head with these!” I also think it’s funny that there is a card filled with seven bullet points instructing me on how to take care of these things.

DVD 4: Zumba Fitness Live! & Flat Abs
The final DVD has two programs. The first is a live 55-minute workout in front of a big audience. I’m not sure how all those people could pack together so tightly and Zumba without someone losing an eye, but they did. This program includes the least amount of instruction, so you should really know the moves before grooving to it. The other program on the DVD is Zumba Fitness Flat Abs. It’s 20 minutes long and focuses on strengthening your core.

And that’s it! Overall Zumba looks like a pretty fun program. When I was learning my salsa steps and booty rolls I couldn’t help thinking this was as close as I’ll ever get to appearing on Dancing with the Stars. I imagined Bruno Tonioli yelling, “More hip action!” at me. I’ll be using the DVDs again, though if I do the sculpting program I’ll probably grab my own five, six, or seven pound weights to make it more challenging.

Giveaway
Ok! Now that you’ve made it to the end of the review, here’s your chance to win a copy of the Zumba Fitness Total Body Transformation System DVD Set which retails for $69.95. To enter, leave a comment on this entry with a creative use of the Toning Sticks. (Not that you would use the Toning Sticks in other exercise programs or for any other uses! No, no, no!) Giveaway ends at 11:59pm ET on Saturday, January 28th, 2012. Only United States residents eligible. Winner will be chosen randomly.

About Zumba: Zumba Fitness® – Zumba Fitness is a Latin-inspired dance-fitness program that blends red-hot international music created by Grammy Award-winning producers featuring contagious steps to form a ’fitness-party.’ Since its inception in 2001, Zumba Fitness has grown to become the world’s largest and most successful dance-fitness program with more than 10 million people of all shapes, sizes, and ages taking weekly Zumba classes in over 90,000 locations across more than 110 countries.