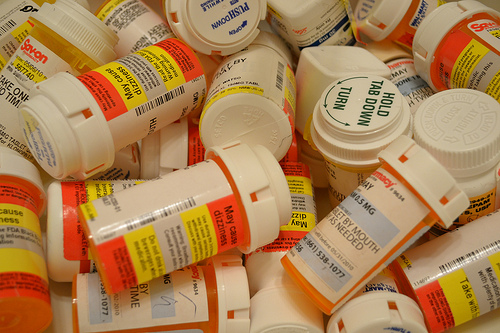 It’s come to my attention that I know way too much about drugs even if I don’t know what pot smells like.

I’ve been wondering what pot smells like because I think my downstairs neighbors might be smoking it. Sadly all I get is the stink, not the high. This smell has been invading my apartment at least once a week lately. At first I thought they were cooking something gross, but then I remembered that my next-door neighbor saw them smoking pot on the porch once. I asked Twitter what pot smells like, but that didn’t help much. Talking about the smell of pot is like dancing about architecture. Do you think the cops would rent me a pot-sniffing dog? I’ll pet it and call it pretty.

Despite the fact that I cannot identify the smell of marijuana, I know a lot about prescription drugs and I’ve had ample opportunities to show off this week. First, my Lil’ Brother tripped on a curb and had to get eight stitches in his head. It happened right after he’d won a free iPad, so I think this was Nature seeking a balance. He called me from the pharmacy and I started quizzing him about what meds they’d prescribed. I told him what each letter in the acronym NSAID means and ran through the names of some of the common ones and then he faked having a concussion so he could get off the phone with me.

The next day, a friend of mine blogged about how she was going off of Effexor and how it was one of the most awful experiences of her life. This is when I took the opportunity to tell her that most anti-depressants are SSRIs (selective serotonin reuptake inhibitors), which means they only target one neurotransmitter, serotonin. However, Effexor is an SNRI (serotonin–norepinephrine reuptake inhibitor) which means it targets two neurotransmitters, serotonin and norepinephrine. Unfortunately for my friend’s brain, the half-life of Effexor’s effect on each neurotransmitter is different. So, when you go off of it you’re feeling the effects faster in regards to one neurotransmitter than the other. That’s why it gives you brain zaps and makes you curse the doctor who ever prescribed it to you.

The day after that, another friend tweeted this about the painkiller Lortab that he’d just been prescribed:

“What’s not to love about acetaminophen & hydrocodone in one convenient pill?”

To which I replied:

Hydrocodone alone has no maximum dosage, but acetaminophen does, so they add it to limit your intake. That’s what not to love 🙂

Because I don’t care if a question is hypothetical if it provides me an opening to talk about the hepatotoxicity of paracetamol.

That is when I finally noticed that I know far, far more about prescription medications than someone without a doctorate should. It is one of the earned skills of the chronically ill. We spend a lot of time reading about drugs on the Internet. I didn’t realize how much I’d learned until this week. (For those just joining us, I’ve had a headache that doesn’t go away for four years.) Of course, because I learned most of this stuff on Wikipedia or Crazy Meds, some of what I know is bound to be inaccurate or misinterpreted. I just don’t know what parts.