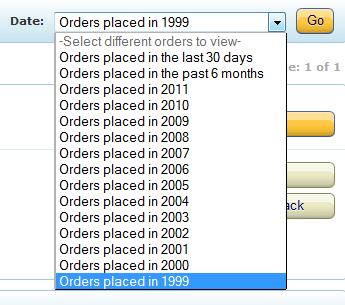 It is the Christmas shopping season, and somewhere in my online shopping adventures I noticed that Amazon has a record of every thing I’ve bought from them in the past 13 years. Thirteen years, people. My shopping history is practically as old as Justin Bieber. It’s also a strangely annotated version of my life through the years, kind of like snooping through a virtual copy of my bedroom closet. 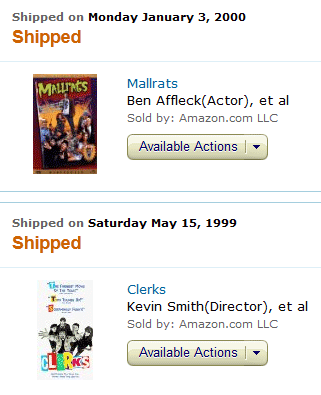 I made my first purchase at the very end of 1999 when I was still a teenager and had yet to learn of the horrors of credit card debt. It was college and Kevin Smith was the center of my humor universe. Future historians will be able to date my advanced age by noting that I ordered Clerks on VHS. Yes, I am an old lady of the Interwebs. I can remember the electronic screams the 56K modem made when I connected online to order these things. We had to wait MINUTES for pages to load. In ten years I think I’ll look back on the current speed of my smart phone data connection with the same feeling. 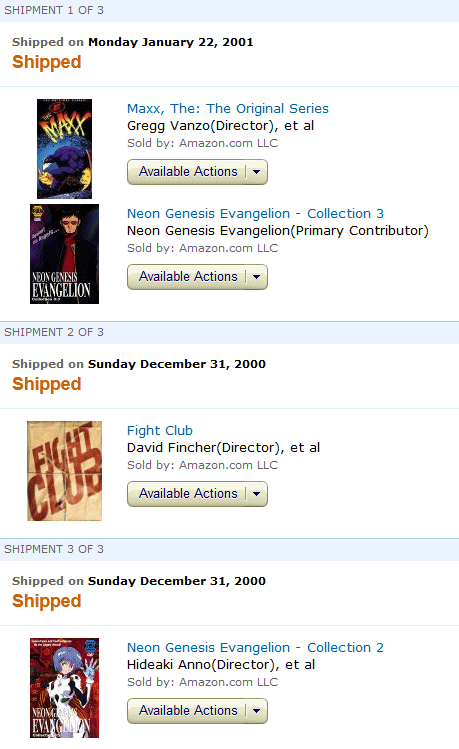 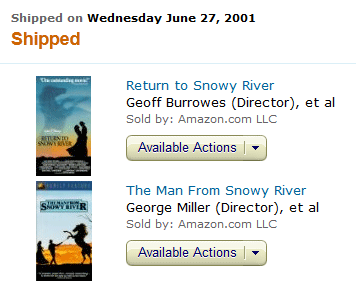 This was the year I lent a video tape of the Tony’s (yes, children, we were still using video tapes) to someone in my public speaking class—and the bitch never returned it! I wouldn’t have cared except the beginning of the tape contained my mom’s only recording of one of her favorite movies, The Man from Snowy River. (I can’t count how many times I’ve watched her watch that horse ride straight down a cliff. Start the video at the 2:30 mark. How does it do that?) Diligent daughter that I am, I ordered a replacement off of Amazon and got the sequel to the original movie while I was at it. But if I ever see that girl from my public speaking class again…I probably wouldn’t remember what she looked like. Oh, well!

My order history for 2002 is strangely skimpy. I think this was when the credit card debt I foreshadowed above finally hit me. I was doing the poor college student thing. I did buy the special edition DVD of Memento which was my first introduction to one of my now favorite directors, Christopher Nolan. The DVD had such a confusing menu I had to download a fan made booklet to figure out how to access everything, including the three different commentary track endings. 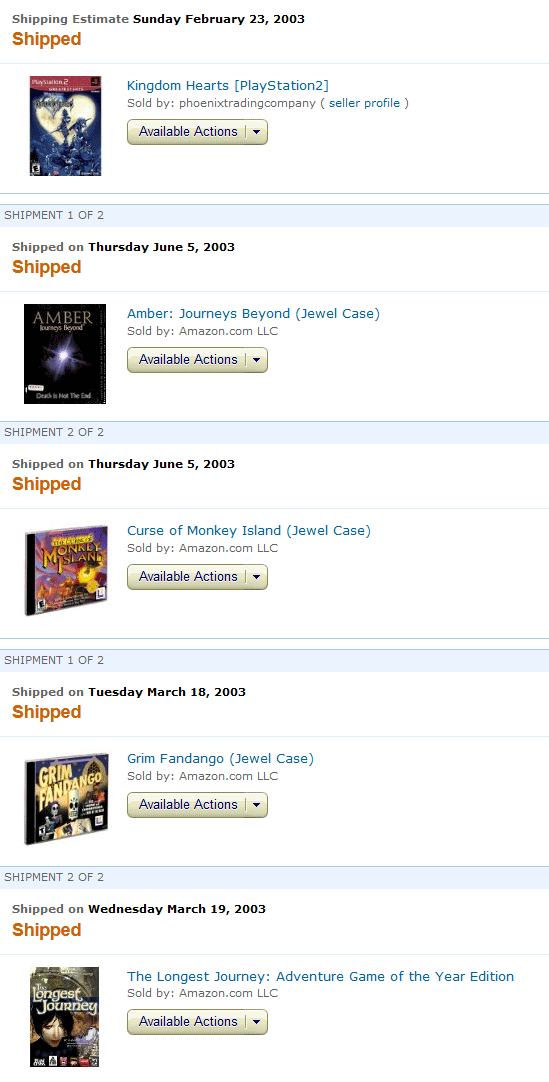 It looks like I discovered video games in 2003 when I probably should have been studying for my final semester of college. I don’t see Final Fantasy 7 on there, but I played that game for a week before graduation when I really should have been, oh, I don’t know, LOOKING FOR A JOB instead of breeding Chocobos. (But I needed to breed the black Chocobo to get to the island with the Knights of the Round Table attack so I could beat Sepiroth! This is an accomplishment I am still proud of today, sadly enough.) 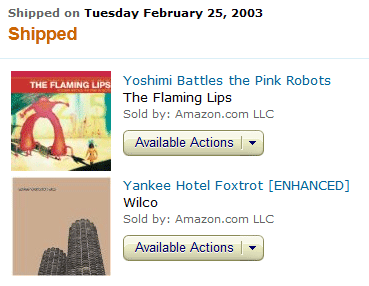 I also seemed to have discovered indie music this year.

In 2004 I bought a digital camera boasting 3.2 megapixels! And now even the cheapest camera phone has higher resolution than this. 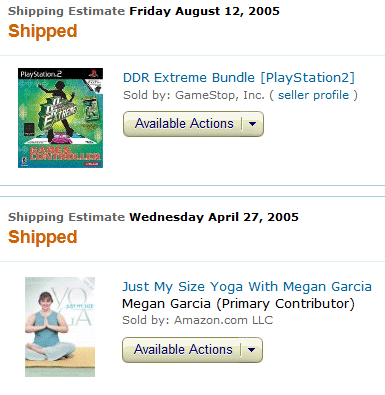 The most frightening thing about my purchase of 15 blank double-layer DVDs in 2006 is…I still have this spindle sitting on my bookshelf. I’ve only used three of these in that past 5 years. The double-layer discs are more expensive, so I never want to use them. I should really get over that.

I ordered this book in 2007 and still haven’t made any hats, on Saturday night or any other day of the week. This is demonstrative of the fact that I think buying craft books, tacky glue, and googly eyes will make me become a craft person, when it’s really just turned me into a Girl Scout troop leader without the troop. (But, but, I can’t get rid of it! I might want to make a raspberry beret someday!)

In 2008 we were up to 7.1 megapixels! And I’m pretty sure my camera phone still has a higher resolution than this. 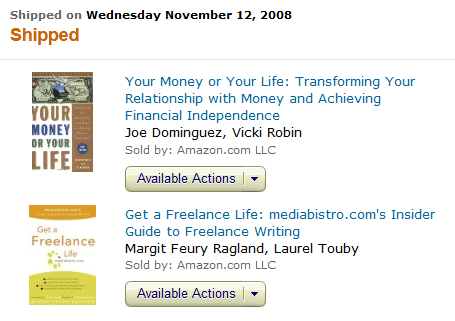 I was also starting to develop my escape plan from my corporate job to the world of freelancing. 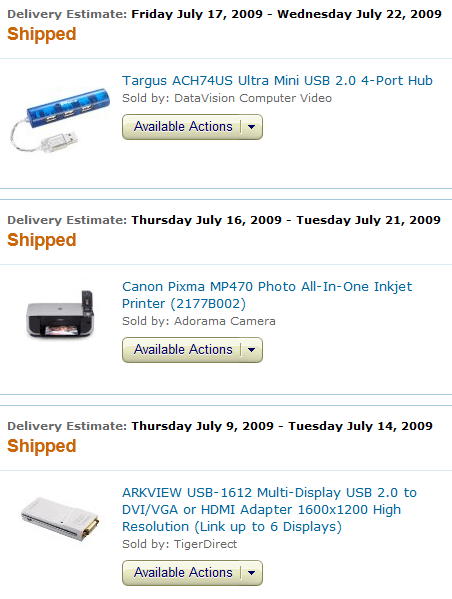 When I finally did quit my job, I had to buy stuff to work from home. Only now this stuff wasn’t just frivolous shopping. It was tax deductible shopping! Sweet. 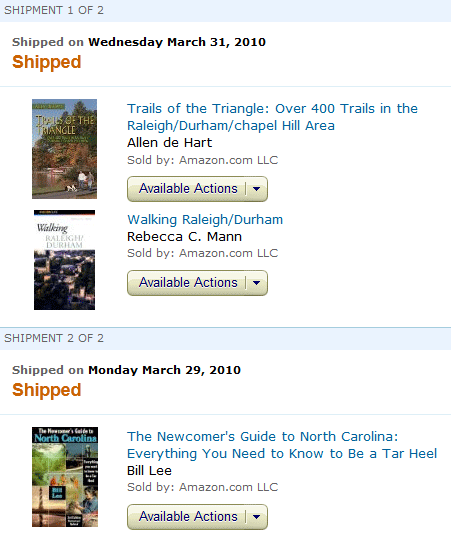 After escaping the office, I started planning my escape from Indiana. Hello, North Carolina! Don’t you look pretty today?

Finally in 2011 I bought a cat feeder because I do not like to be awakened at six in the morning with a cat sitting on my head.

So that’s that. It will be interesting to see what I’m buying from Amazon in 10 years and if they’ll ship it via flying car.