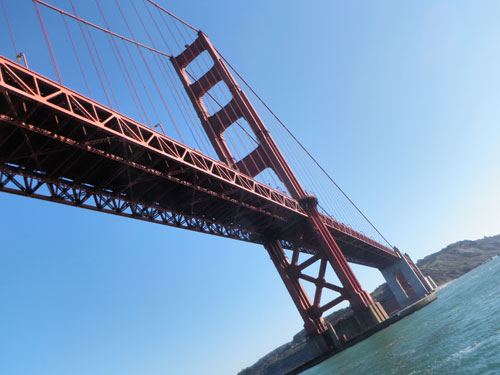 I occupied San Francisco last week…in the traditional sense of occupying space, much like I am occupying Chapel Hill right now (and not in a tent in front of the post office). I took a birthday vacation to visit some friends and take advantage of their sofas. Visiting cities where your friends live cuts costs and makes them feel like they’re getting the full value of their sofa purchase. However, I did see some people occupying San Francisco in the newest sense of the word: 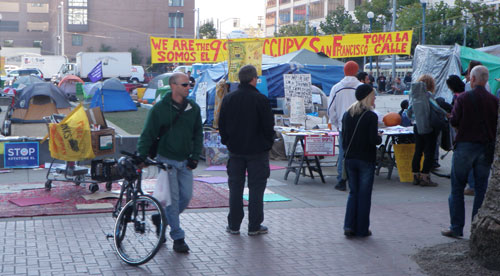 They become an impromptu tourist trap. To people visiting the city they were as photo-ready as the Golden Gate bridge.

My friends had to go work on a Thursday (losers!), so I was on my own. That morning I felt totally intimidated by the public transit system, clutching my Frommer’s Guide with fold-out map close to my chest. But by the next day I felt like an old pro. I even knew when to buy a macaroon or postcards to break a five dollar bill for proper bus fare.

I started by jumping on the cable car at Van Ness and California like my friend Mo recommended, and not the cable car at Union Station which has a one-hour line (if you’re lucky). The only waiting I did was for five minutes before we started down the hill! The coolest thing about the cable car (besides the swift morning breeze) was that it stopped in the middle of an intersection to pick people up. The cable car operators also seemed to have a flexible attitude towards fares. If you hopped on and then off before the fare attendant wandered by than you ride was free. 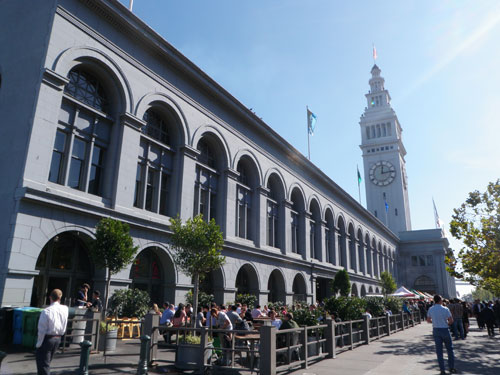 I wondered around the ferry building, which no longer serves any actual ferries. It’s like a mall with a farmer’s market on Saturdays. I bought a decorative magnet and electric plate from a street vendor. Then I walked around, checking out the views and the sea gulls who had no fear of humans, until I met Mo for lunch. This was the first time I got to use the Google Maps application on my phone extensively while traveling. It’s fantastic because no one can tell you are totally lost. They just think you’re texting.

After lunch I wondered around Chinatown, which is very dense with people. I stopped by a fortune cookie factory (after I walked past it and consulted said Google Maps app), and I found Waverly Place, a short little street that is mentioned in The Joy Luck Club. 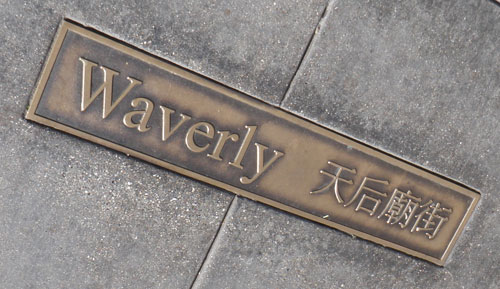 What I found most interesting about Chinatown was the integration of traditional Chinese design with American imagery. There was a cafe with a Chinese title and a big red Coca-Cola sign. The Bank of America looked like a pagoda. And there was a Chinese Baptist Church. I also walked by a restaurant called the “Loving Hut.” I don’t think that title translated properly, unless there’s a hidden item on the menu. 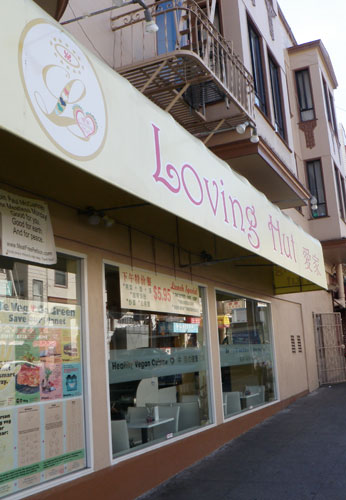 One of the defining characteristics of San Francisco is that it has hills. Lots and lots of hills. Very steep hills. In Chinatown I started walking up one of these hills behind a very slow, elderly woman. Normally I am annoyed by slow walkers. I am familiar with chronic pain and the way your body starts to let you down as you age, so I understand why people walk slowly and empathize with them. Still, it annoys the shit out of me. However, as I took baby steps up the hill behind this woman I suddenly realized something: this woman was a genius! When I go up hills I try to keep my stride length fairly close to normal, which wears me out quickly. If I took little baby steps up these hills I could pace myself without stopping to vomit up a lung every block. Thank you slow, elderly woman! You are wiser than your years!

I had some free time before meeting some friends for dinner, so I went a little crazy and walked from Chinatown to the top of Telegraph Hill. I think I wanted to prove to myself that I was still active and mobile even though I’ve gained some weight. There is no longer a telegraph at the top of the hill, only people panting heavily. I walked up a fairly steep street just to get to the entrance here: 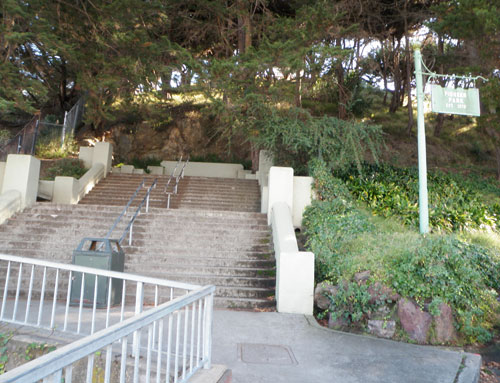 After you get up the steps, there’s a long ramp that winds around the hill. 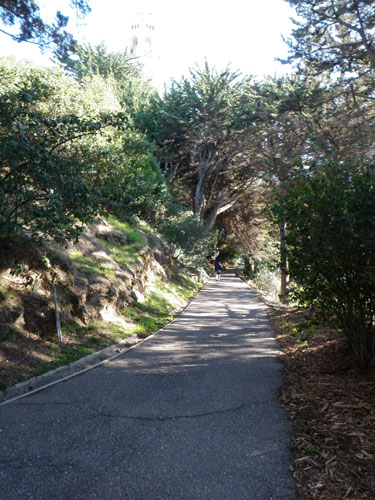 I admit, I took a break on a conveniently placed bench. Then I continued until I got to this set of steps: 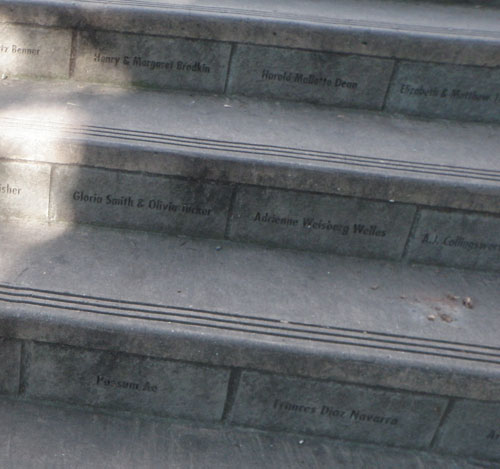 I can only assume the names engraved on these steps are those of the people who died trying to reach the top. Godspeed, my comrades.

Finally, I finished surmounting the freakin’ hill and immediately found another tourist to take photographic evidence that I made it to the top. 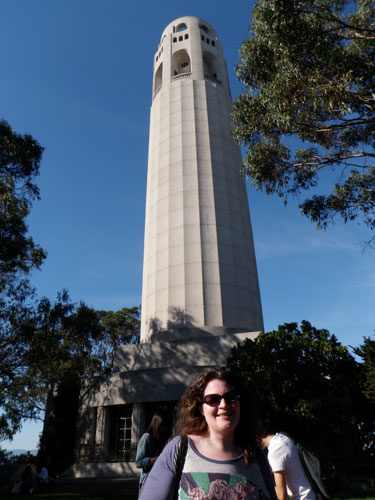 The reward for raising my heart rate into the anaerobic zone was the spectacular view. 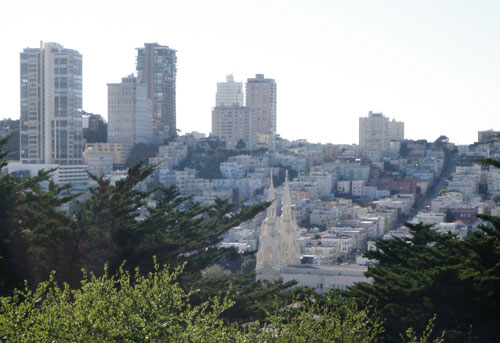 I have to admit, I don’t think Telegraph Hill was as steep as the hill I climbed in Greenwich, England to see the prime meridian. (It looks like I ran into protesters on that trip, too. Do they schedule these things just for me?) Still, it was a workout.

The side effect of walking up a hill is that you have to go back down it, or do as the homeless do and take over a nice park bench. I already had a nice sofa to sleep on, so I made my way back down. Normally I consider going down stairs to be a lot easier than going up stairs. San Francisco proved this theory wrong. 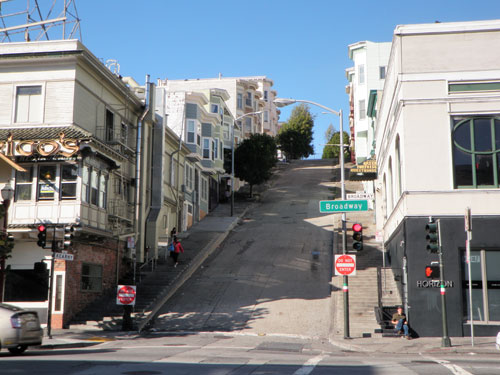 That is not a hill. That is a geometry problem. I should not be walking down it; I should be calculating the cosine. Judging by the buildings on the left, it looks like I walked down 5 stories on this block. There are concrete stairs in place of a sidewalk. There is no railing. Descending this hill felt like I was being pulled into a gravity vortex. I had to fight to stay vertical and not pull a Jack and Jill.

I was amazed the cars could park on one of the other hills I descended: 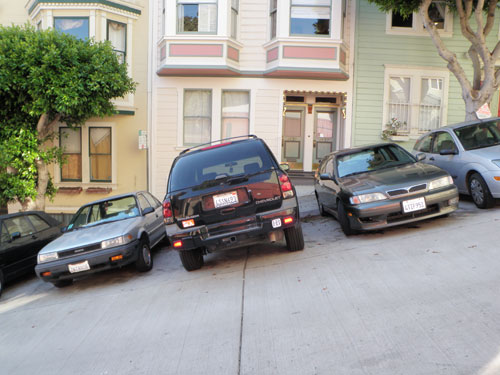 Seriously, do you see how far the houses would have to be tilted for these cars to be on flat ground? 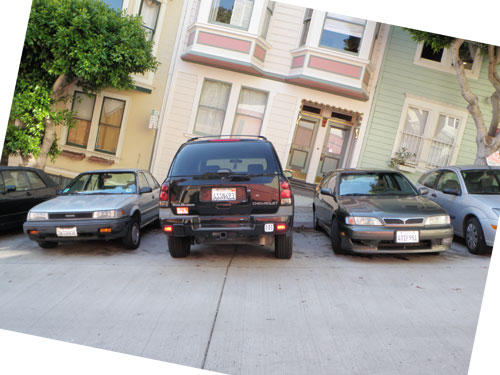 I eventually made it back to the ferry building to have oysters with my friends at a place with very negligent waiters. As I waited for service, I sucked down two glasses of water I stole from friends. This was after draining my metal drinking bottle throughout the day. By this time I was tired and my phone was dying. I’d never used it so much in a day so this was the first time I realized the battery life kind of sucks. I loitered outside the bathroom next to an electric socket for 10 minutes so I’d have enough power to text.

I then hopped on a bus to meet my other friends, rapidly texting, trying to get directions before the battery totally died and I’d be forced to buy something from a coffee shop to rent time from their power outlets. I ended up walking in the wrong direction and then walking back and still got there before my friends. I think I left my feet on the bus though, because they really hurt by then.

I caught dinner with my friends and then we went to Naked Girls reading Neil Gaiman, which is exactly what the title says it is. It was a bit weird, but I expect that in San Francisco. It took place at the Center for Sex and Culture which is in a nondescript building without any sign on it.

That’s how I wrapped up my first day. More to come about days two and three which include a visit to Lucasfilm and Twitter!