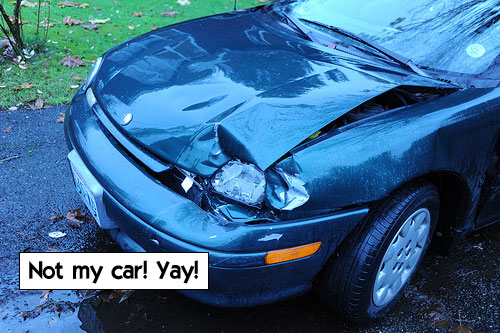 A few minutes ago I was walking out of Ace Hardware carrying a replacement air filter for the one I hadn’t changed in, um, over a year. (I like my air dusty!) That’s when I saw the green van creeping down the aisle of the parking lot and the white car slooooooowly backing toward the van’s side door. I cringed and stopped right in the middle of the road (real smart, Jennette), hoping the white car would stop, stop, PLEASE STOP! Then I heard that familiar CRUNCH sound like an aluminum can being squashed. (Yeah, it was all too familiar. Blame my 17-year-old self. And my 29-year-old self, too.)

It’s rather horrible to know something bad is about to happen but to have no way of stopping it. I really feel for people in movies about time travel who can’t stop airplane crashes or the deaths of loved ones. I guess they can’t stop minor fender benders either or stop you from misplacing your keys.

When the driver of the van got out of her car, I asked her, “Are you ok?” because my mother told me that’s the first thing you should say to someone after a car accident. It makes you look caring and concerned for the other person’s well being even if you don’t give a shit because they just plowed into your car. The last thing you should say is, “Sorry, it was my fault,” even if you’re pretty sure it was your fault. You shouldn’t give them anything to use against you in case it actually wasn’t your fault. You should always file an accident report too so there’s official documentation on what happened and whose fault it was. (I admit I have only done this once even though I’ve been in, um, more car accidents than I’d like to admit, though half of them were with inanimate objects.) If someone asks you not to file a report or promises to just pay you back for damages, do NOT do it because they are a lying jerk and will rip you off like they did to a friend of mine.

Van Lady was all right because it’s basically impossible to get injured by a car traveling 3 miles per hour. Van Lady and Car Lady then got into an argument in which Car Lady said, “Why do you have to be so hateful?” Uh, because you just backed into her van, dumbass, and will now cost her hours of her life filling out paperwork and getting the vehicle fixed. They started yelling at each other and I recognized that they were escalating the situation because I’ve watched every episode of Flashpoint. (I love using the word “escalating” in this context. It makes me feel fancy.) I kind of wanted Enrico Colantoni to step in and help them work it out. Instead I walked over to the coffee shop across the mini-mall because my car was now blocked from getting out of its parking space. I thought about leaving my contact info as a witness, but it was clear whose fault it was. The van couldn’t exactly slide sideways into the car that was pulling out. And I really didn’t need to involve myself in this shit.

Anyway, I hate this parking lot and I’ve always suspected I would one day get into a car accident here. I still might, but I’m glad the one I witnessed happened to people who aren’t me. I am a wonderful human being in that way.