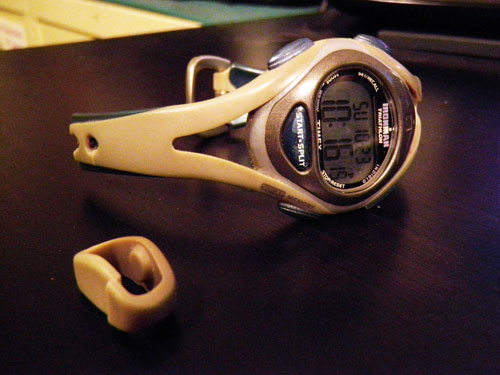 The little doohicky that slides over the end of the watch band broke first. I replaced it with an elastic hair tie wrapped around the band four times because I am clever and cheap and have long hair. A week later I rolled over in my sleep and the watch went flying off my wrist, face first into the wall. The wristband had broken through and through, so there was no fixing this. The wristwatch is all one piece, so I couldn’t buy a replacement band. Tape wouldn’t hold and I couldn’t meld the plastic back together with laser vision because I am not Superman. (Not that I would tell you if I were.)

This means that this week I haven’t been wearing a watch for the first time this century (and probably a good 10 years before that too). Instead, I’ve been experiencing time in the way most human beings experienced time before Timex, fluid and slightly unknowable instead of chopped into identical, measurable pieces. What time is it? I don’t precisely know, but I can guess within an error margin of plus or minus two hours.

The fact that there is an official time agreed upon by most of humanity is a relatively new phenomena. As I understand it, synched time zones only arrived with the railroads. It was hard to make up schedules of arrival and departure times if every city had their own time, so we all got down with Greenwich Mean Time. Before then, your schedule probably had more to do with sunrise, sunset and noon than it did with the tick, tick, ticking of a machine. Because really, when the power goes out it’s hard to do anything after sunset. Candles are not that bright, y’all.

My watch has been such a part of me that I was unaware of how much it affects my perception of time. I stayed up late reading a book last week and wondered if it was time for me to go to bed or not. I looked at my wrist for the time and my carpal bones were completely unhelpful. How late was it? How late did it feel? Should I go to bed, or was it still too early for that? I wasn’t that tired, but if I wanted to at least attempt to keep my body on a routine schedule, I should try to go to sleep at a certain time. I wasn’t used to making this decision by listening to my body instead of knowing how many minutes past midnight it was. If I woke up in the middle of the night, I’d feel totally disoriented if I couldn’t see what time it was. How would I know how many hours I had left to sleep? How could people live with that kind of uncertainty?!

Another night I was watching a TV show (which I was able to watch at the right time because I checked the clock on my computer). At one of the commercial breaks I tried to check the time to see how long we had left to wrap up the plot. Twenty minutes? Thirty? I didn’t know! I had to just go with it, not knowing exactly what act we were in and how long it would take for that lady to crash onto the top of a taxi like she did at the beginning before we flashed back.

I also depend on my watch to track my hours when I work on a client’s project. You can’t bill by the hour if you don’t know the hour. I found myself trying to look at my wrist for the date and the time whenever I stopped or started because I couldn’t be bothered to use a couple neurons in my brain to REMEMBER the date. I usually look at my watch each time instead of committing it to memory. I mean, it changes every day, right? Why bother?

Of course, some things I don’t need a watch to remember. All of these things have to do with cats. Cats know when it’s six o’clock in the morning because that’s when it’s time for them to scratch at the door or walk on your face to remind you to feed them, bitch, NOW! And I know it’s after nine o’clock at night as I write this, because that’s the block of time that has been set aside for cuddling kitties. The claws tearing at my sweater are letting me know how late I am for my appointment with the couch. Cats don’t need wristwatches. They are organic alarm clocks.

While there is some appeal to viewing time as malleable, there’s no way I’d ever get rid of the way we measure time. I like to arrive at appointments at the same moment someone is expecting me to be there. I like to know when my TV shows are broadcast so I can actually watch them. Different cultures have different views on punctuality though. I believe that in some countries you can show up an hour late to something and it’s not really a big deal.

I would not last long in these countries.

All of which is to say time is kind of weird, eh? (And I’m not even getting into what happens to it when you travel near the speed of light.) I must admit that I like my time split into seconds and grouped into minutes. There is a part of me that thinks I should be more Harlequin and less Ticktockman, but there is another part of me that says, “OMG, do you know what time it is?! It’s time to get a new watch!!”