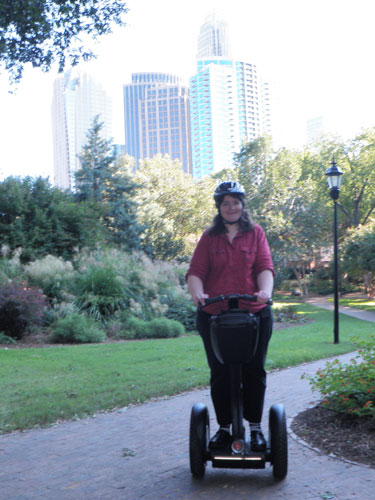 Chapel Hill and Charlotte are not close to one another, unless you’re comparing the distance between them within the scope of entire universe. In that case they are close, but that doesn’t matter much because I am a cosmic speck in comparison to the size of the universe and it takes this speck two and a half hours to drive between the two cities. I was heading to Charlotte for an event at their performing arts center, but it’s my general rule that I should spend at least as much time in a city as I spend driving there and back, so I decided to fulfill a life-long dream that day and go on a Segway tour. (Actually, Segways have only been around for ten years, so let’s call it a decade-long dream.)

Segway tours are offered in most major American cities. I signed up for the basic tour at Charlotte NC Tours which also offers bike tours and walking tours of Charlotte. The other members of my tour group were a mother and father with a teenage son and daughter. The kids were probably half my age, literally, which made me realize that if they were blogging this I would be referred to as the overweight, middle-aged woman on their tour. Huh. Self-identity vs. public identity battle it out once again. KA-POW! SMASH!

The tour started with 20-30 minutes of training. First the instructor demonstrated the basic driving skills, then each person got one-on-one practice with the guide. The kids made it look as easy as riding a bike. I made it look as easy as riding a unicycle. Stepping on a Segway feels like stepping onto the center of a teeter-totter. If you lean backward the Segway goes backward, and if you lean forward the Segway goes forward. (Crazy, I know.) If your weight is evenly distributed forward and backward, the Segway stays put. When stepping onto the machine for the first time, I didn’t know precisely where the fulcrum was, so I wibble-wobbled and felt like I might fall off, though I didn’t. I’m not sure if that’s because of the machine’s design or because the guide was holding onto the machine like I was a kid who had just ditched her training wheels.

After some practice I felt ok on the device, though definitely not a master. That, of course, is why I was chosen to be the person immediately behind the tour guide in our row of ducklings. That was so I wouldn’t fall behind the pack and get lost or fall down a sewer hole unnoticed. It reminded me of that time I was the worst player when I took tennis lessons. Or that time I kept falling on my ass when I took skiing lessons. I really can’t blame the kids for picking me last for Dodge Ball. I would have picked me last too.

First we went across the street to the Nascar Hall of Fame which has a big, open patio perfect for practicing. The patio was also empty, which eliminated the chance of any Segway vs. pedestrian battles. It might be fun to have a Segway jousting tournament though. I hear they have Segway polo.

My biggest handling problem came when I could see a small bump in my path. My first instinct in that situation is to slow down, but the best thing to do is to maintain speed so you have the momentum to continue over it. The Segway is a full-body machine though, so even though my head knew to keep going, my body instinctually leaned back to brace for the hit, which slowed down the device. Thankfully there weren’t too many bumps on the tour. I was amazed that we were able to go everywhere on roads and sidewalks without hitting a single curb. I suppose I have the Americans with Disabilities Act to thank for that. Thanks, Americans with disabilities! 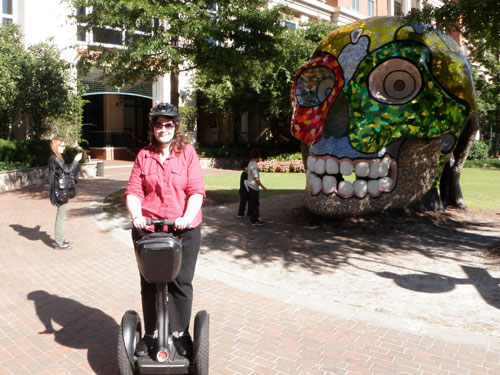 Our flock of Segways was a bit of a spectacle. Random people would wave or gawk at us as we revved by. One lady in a car even stopped and asked the tour guide for directions. I guess if you’re a tour guide you’re assumed to be a human GPS. We traveled farther on the Segways than I could have comfortably walked, however my feet hurt a lot more than I expected. I was too afraid to get off the Segway and get back on, even though the guide would have assisted me. My feet hurt because it was harder to shift my weight back and forth on each leg like I would have if I was just standing on a sidewalk. Any movement had an effect on the Segway and I didn’t feel secure enough in my skills to shift my weight that much. I wished I had worn my athletic shoes which have good padding and support.

One downside of the tour was that I spent a lot of time focusing on the sidewalk in front of me trying to avoid a wreck instead of looking at the buildings around me, which was, you know, the other reason I was on this tour. I also felt an unexpected awkwardness when our flock zipped past two different guys in motorized wheel chairs. It felt like we were saying, “Hey, there! I’m riding around on a motorized device for shits and giggles, but you’re riding around on one because you have no other choice. Have a nice day! Vrrrooom, Vrrrooom!”

As for Charlotte itself, the city is lovely. It reminded me of Indianapolis because they both have grid layouts and they’ve both focused on redeveloping their downtown areas in the past decade. There were even some of the same restaurants like Rock Bottom Brewery and McCormick & Schmick’s.

I’d definitely recommend a Segway tour to others, but I’d also make them aware that it’s slightly more physical than it looks. A Segway is not a car you drive around standing up. There is physicality involved. You need to be able to stand up for over an hour with only a few breaks, if any. I believe there’s also a recommended weight limit on the Segway of 260 pounds. No one weighed me before the tour, but I’d guess that if you’re significantly over this limit they might not let your ride. Segways cost at least $5000 each, so I doubt the tour owners want to push their expensive investments too far past the recommended limits.

I have no idea how long it would have taken to drive a Segway from Charlotte to Chapel Hill, but I’m certain my feet would have been numb by the time I arrived and the battery probably would have died before I reached Greensboro. I drove back in my car instead.