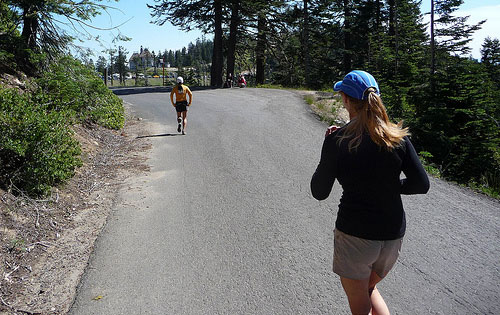 I’ve spent most of this year feeling like a hobbled old women due to my tendonitis from hell. The orthotic inserts seem to have eliminated my pain, and the temperatures have dropped from face-of-the-sun hot to lovely-autumn-day cool, so I’ve started walking regularly again. I didn’t realize how much I missed it until I got those 30 minutes a day back to think and daydream. It’s good just to be walking around because sitting all day is evidently going to kill me. (ETA: There used to be a link to an infographic there, but the site owners asked me to remove it. So, no infographic for you!)

However, my favorite walking route has been off limits this year due to construction of some silly public works project that will make us all safer from floods or something, as if this is more important than my walking route! (That’s what flood insurance is for, right?) That route winds along a stream so it feels like I’m out amongst nature. But it’s also on a sidewalk next to a road, so I feel fairly safe from muggers and rapists and iPod thieves.

Lately I’ve been walking on a nature trail which is actually a bit lovelier, but is also more isolated than the other route. It’s not as well-trafficked as the Monon Trail back in Indy. I will frequently hit long stretches where I don’t see another human, even in the evening when the Monon was highly-populated. Then when I do see a human, it’s just one human who could possibly drag me into the bushes never to be seen again.

Statistically speaking, it’s highly unlikely I will get attacked on the trail. That said, there have been at least two attacks on Indy’s Monon Trail in the past year in the segments that I used to run on. One was a shooting not far from my old apartment which is in a residential and commercial area that I wouldn’t associate with high crime. I believe the Indianapolis crime map will back me up on this opinion.

So, I think it’s best to practice safety techniques to reduce my chance of being assaulted while I’m working up my happy exercise endorphins. I’ve been drawing on some knowledge I learned at a self-defense class offered by a women’s gym two years ago. It was run by an off-duty cop who taught us many things, including how to kill a man with your bare hands and what to say afterwards to help avoid prosecution. Seriously. Not joking here. Needless to say, my perception of the men and women in our police force was, er, broadened after this course.

Oh, in case you’re interested, the way to kill a man (or woman) with your bare hands is via a sleeper hold, also called a choke hold. It compresses the cartoid artery, preventing oxygen from flowing to the brain. The victim first loses consciousness, but if you hold it for a few minutes they’ll die. Technically you’re killing someone with your bare arms, not just your hands, but whatever. The best thing to say to the cops afterward is, “Oh my God, he was going to kill me!” This helps set up your case for self-defense.

Interestingly, most of self-defense comes down to prevention. You want to do everything you can so you’re not in a position where you have to gouge out a man’s eyeballs with your press-on nails. Here are some other safety tips our teacher gave us that don’t involve murder:

One of the first rules of safety is to be aware of your environment. When you’ve got your ears plugged with ear buds you are not aware of your environment. Someone can easily sneak up on you. Now, I love listening to music or podcasts when I walk, so I’ve reached a bit of a compromise on this issue. I exercise with only one earbud in my left ear, leaving my right ear open to hear anything rustling in the bushes. This means I’m highly attuned to fend off rabid squirrel attacks.

Make eye contact with other people on the trail

I’m always sure to make eye contact briefly with anyone coming toward me on the trail. I then turn around a few seconds after they pass to be sure they’re still walking away from me. If I’ve been walking alone for awhile I’ll glance behind me, and I definitely look when I hear someone approaching. This behavior is meant to dissuade any potential attackers from taking a shot at you because you’re not an easy mark. They’d much rather attack someone who is completely oblivious to their presence.

Don’t wear your hair in a ponytail

This one is up for debate, but I’ve heard that you shouldn’t wear your hair in a ponytail because it can be used as a convenient handle to yank your head back. I have to admit this is one rule I totally violate, though sometimes I wear an elastic headband instead to keep my hair back. I’ve also heard this tip might not make a difference since there is no data suggesting that women with ponytails are more likely to be attacked. However, I can’t see how the lack of a ponytail would make you more likely to get attacked, so I thought I’d mention it.

Carry your phone with you

I always make sure to have my phone in case I need to dial 911. I don’t know if it would actually help because the cell phone reception on the trail seems to be sketchy. I’ve tried using a GPS app on my phone to track my walks, but it never seems to work. It thinks I’ve spent half an hour standing outside my apartment, like I’ve been ditching gym class to smoke in the stairwell. On the bright side, I know I can’t be attacked by a Foursquare killer!

I’ve got two cards with all this info on it that I’ve “laminated” between two pieces of clear contact paper. If I am injured and unconscious someone will hopefully rifle through my pockets and call my brother without stealing a twenty dollar bill at the same time. If they do, I suppose it could be considered a finder’s fee.

Remember that almost any object can be used as a weapon

Or as Ani DiFranco put it, “Any tool is a weapon if you hold it right.” This safety tip applies mostly to home invasions. The self-defense teacher made us brainstorm what things in a kitchen could be used as a weapon, and we came up with a surprisingly long list. Canned peas, a coffeepot, a can opener, silverware (sort of obvious, what with the KNIVES), etc. Hell, you could probably bash someone’s face in with a toaster if you had to. If you are attacked on a trail, your keys make a pretty good weapon. Don’t hold the keys between your fingers though. If you try to attack someone this way the keys will just bend back onto your hand, hurting you as well. It’s better to line a key up beneath your pointer finger and try to gouge the attacker’s eyes out with it.

Never go to a secondary location

If your attacker tries to drag you into a car or bring you to a secondary location, do not go. They want to take you somewhere isolated so they can kill you more easily. It’s best to make your stand where you are, fight like hell and try to run away. If you get car jacked, wreck your car into an electric pole if you have to and make a break for it.

Too often people put themselves into dangerous situations because they put the desire to be polite over their instinct to listen to their gut. Women are particularly guilty of this because we are socialized to be nice and non-confrontational. Yes, staring someone down on the trail could be considered rude, but it’s better to be rude than to be attacked and later say, “Well, at least I wasn’t rude!” Of course, just because someone gives you the heebie jeebies doesn’t mean they’re a serial killing rapist. Your instincts aren’t always right, but they’re always looking out for your best interests. And really, any guy who has a mother, sister, or daughter is going to understand why a woman walking alone on a trail would be cautious toward a stranger. If they don’t, they’re not someone you want to interact with anyway.

Those are all the major techniques that I remember from the class. There is also a great book by Gavin de Becker called The Gift of Fear and Other Survival Signals that Protect Us From Violence that teaches you how to avoid and manage dangerous conflicts. Feel free to add any tips in the comments, or let me know if any of the tips I’ve listed are wrong or don’t make a difference. There seems to be a lot of misinformation out there about what actually works and what doesn’t, so I’d be happy to get more info on this topic.

Later: Did you hear that Susan from Twitter wrote a book?
Earlier: Stickk to it. (Sorry, grammar police. That’s not a typo.)
Home: Main blog index