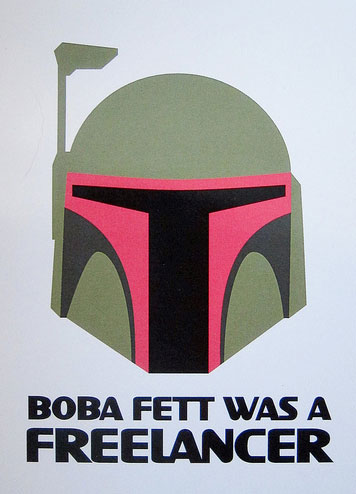 It was exactly two years ago today that I said good-bye to my old job working for The Man and said hello to my new job working for The Woman, namely me. It’s been two whole years of designing webs and writing words and I’m still not broke! If I have a freelancing motto, that is my freelancing motto: Still not broke! I should put it on a T-shirt, but that frivolous expense would put me one step closer to being broke, so I’ll skip that. I have adopted that motto because when I first made the jump I wasn’t sure if I’d be living in a cardboard box under an underpass a year later. Nope, instead I’m living in a two-bedroom apartment that was once terrorized by wasps.

Yes, there have been challenges. Trying to find health insurance has been like trying to find Waldo. Right after I moved and bought a couch and a bed, I looked at my bank account and thought I’d be destitute by Christmas. There have been times I’ve overbooked myself and unintentionally left clients hanging longer than I would have liked. I’ve worked through that though, and learning to overcome those challenges has forced me to grow as a person.

I’m much better at asking for what I’m worth, particularly after I underbid a few jobs and realized I’d slaved through a few projects for ridiculously low pay. I have less anxiety talking on the phone because I’ve come to realize some conversations really do need to occur via sound and not text so everyone can be sure we’re talking about the same things. I’ve learned that every client has a different communication style and I need to adapt to that to best serve them. And I’ve learned more about taxes, bookkeeping and invoicing than a non-business major ever thought she would.

When I graduated from college I had a job interview with a web design company. They asked me what I’d like to be doing in 10 years and I said running my own business. This was a lie. I said that because I thought that’s what they’d like to hear, inferring that I was a hard-working go-getter. (Though I’m not sure what I was supposed be go getting for them…coffee?) I was quite sure I would never start my own business because it seemed frightening and completely outside of my capabilities. I didn’t know anyone who’d started a business. It seemed scary and complicated. It was something other people did, not people like me. It was much safer to work for someone else and collect a regular paycheck.

But here I am, eight years later, and I do run my own business. It’s only because of the Internet which allows me to take on clients from all over the world, most of whom I met through my blog or who know people who met me through my blog. The Internet also allowed me to meet several people who work for themselves. They are all smart and capable, and I figured if they could do it so could I. Just knowing someone else has done it, someone just like you, makes it seem more achievable. I guess it’s like weight loss that way.

So, yippee! Two years down. How many more years to go? I don’t know. I just hope they’re good ones.