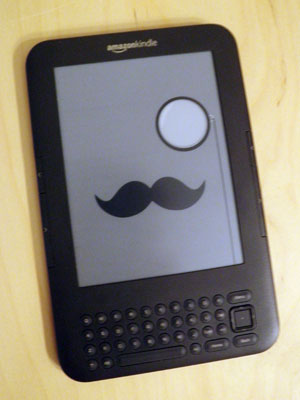 Last month I finally cracked and bought a Kindle. The price has dropped to $139, which isn’t exactly cheap, but is cheaper than a trip to the dentist without insurance. For that price I figured I’d enjoy an e-book reader more than chomping on one of those bite-wing x-ray thingies that cut into my cheek. You can also buy one for $114, but the screensaver displays an ad when the Kindle is turned off. I thought it was worth the extra $25 to opt out of that.

What finally pushed me over the edge and into a credit card charge was the Song of Ice and Fire fantasy series by George R. R. Martin. The first book was recently turned into the first season of an HBO series and it sucked me in. There have been four books released so far, and the fifth comes out in less than a week. The release schedule is like waiting for a Kate Bush album though, and Martin keeps adding books to the projected length of the series, so I’ll probably be fifty when it’s done. (Assuming he doesn’t die first.) As if that weren’t discouraging enough, each book is eleventy-billion pages long, so the time it takes to read this series is longer than some relationships I’ve had.

Here’s my confession: I’m afraid of big books. Anything over 350 pages starts to push the limit of what I can read before losing interest or losing hope. When I had to write my first book, I honestly wasn’t sure if I could write something 80,000 words long. The longest thing I’d written before that was a 13-page term paper on sex in the middle ages. (I chose that topic because the only way I was going to get through writing a 13-page term paper about the middles ages was if it was about sex.) It’s hard for me to keep an interest in a long book even if it’s about myself.

My fear partly comes from the fact that I’m a slow reader. I used to feel bad about this because a writer is supposed to read a lot so you can subconsciously steal from all the best writers and avoid doing everything the crappy writers do. I often felt inferior to people who could read as many books in a month as I read in a year. Sometimes people tell me they read my book on an airplane and I want to ask them if they were flying to Australia. I’ve NEVER read an entire book on an airplane, and never will unless it’s written by Richard Scarry.

I’ve only recently gotten over my inferiority complex (for the most part) because I realized I like reading slowly. I like saying the words aloud in my head (which is commonly or uncommonly known as subvocalization). I like rereading sentences or paragraphs that are particularly striking. I like letting my mind wander when a book triggers a line of thought, or when I stop to imagine some alternate plot the characters might embark on. I like to savor books, just as I wish I savored food. (I love to inhale food, though I’m always trying to eat slower and more consciously.)

Accepting my slow reading tendency does not make the prospect of a BFB (Big F*&#$ing Book) any less daunting. I have passed on reading books that looked interesting simply because they were too long. I can’t promise that I can finish them faster than I will forget what happened at the beginning. My short-term memory has its limits. However, I’ve finally found a way to overcome this fear. The solution is an e-reader!

The best thing about my Kindle is that I have absolutely no idea how many pages a book has. I have a general sense of its length because the main Kindle menu displays a row of dots below the book titles that is proportionate to the book length. But the Kindle doesn’t have page numbers! It has vague “location” numbers that have no correspondence in my mind to actual book length, sort of like I have no idea how far 28 kilometers is or how hot 23 degrees Celsius is. What does it mean that I’m at location 527 out of 13,572? I have no idea, and it’s wonderful! The Kindle does tell you what percent of the book you’ve read, so you know if you’re halfway through or not. But I still don’t don’t know how many pages that half was, so I’m not as intimidated by the half I still have to read.

Contrast this to paper and ink books where it is obviously clear how far you are through the book. You just need to look at the thickness of the pages you have left to go, and when it’s over an inch I feel like I’m on mile six of a marathon and already exhausted. Frequently I’ll flip to the final page to see how many pages there are and do a calculation in my mind of how many pages are left, and sometimes I get really depressed. I know I shouldn’t view reading a book as a race I’m trying to finish. I should just enjoy the book as it comes. But I can’t help but feel a sense of accomplishment when I finish a book and get to add it to my count for the year. I feel like I’m scoring a goal every time I get to the last page.

The other great thing about my e-reader is that it’s much harder for me to spoil myself for the rest of the book. I always tell myself not to do that, but by the time I’m 80 pages in and know it will be hours and hours before an exciting plot point will be resolved, I get impatient and flip around looking for the “good stuff.” It’s bad. I shouldn’t do it. I always do. It also lengthens the amount of time it takes to read the book because I usually reread those sections when I get to them in the proper order of things. With an e-reader, it’s a lot harder to flip around. You can go to the table contents and jump immediately to a later chapter, or you can do a search for a certain term. But even that is a bit of a pain, and with e-reader technology right now it still takes a second or so to “turn” a page. I can’t just fan the pages back with my thumb.

This change in perception has made it possible for me to read the first four books in the Song of Ice and Fire series in about a month and a half. Thank you e-reader! Your obfuscation of true book length and the difficulty you make it to spoil myself have led to an overall more positive reading experience. You also play MP3s with pretty decent speakers, so I can listen to the Game of Thrones theme while reading Game of Thrones. I heart you. 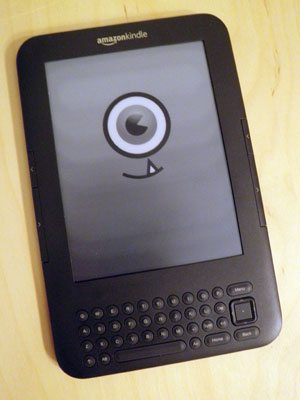 * Those of you with a Kindle might be wondering how I removed that cycle of kinda’ pretentious images of authors and wood carvings that serve as the screensaver. (I don’t have anything against Emily Dickinson and Virginia Woolf and Harriet Beecher Stowe and all those peeps. It just seems silly to imply that I’m filling my Kindle with the classics when it’s actually filled with trashy novels and pulp fiction.) The screensaver was starting to annoy me, so I jail broke my Kindle.

Jail breaking is dangerous because you might “brick” your device. Bricking is when you eff up your device so badly that you essentially have a very expensive brick. You can’t get a free replacement either because you voided your warranty when you started jail breaking, you naughty person, you! People have been known to jail break iPhones so they could use them with other service providers. From what I’ve read, jail breaking a Kindle is relatively safe, but if you break yours, don’t come whining to me. Please don’t ask me for help jail breaking your Kindle either, because I don’t care. Figure it out yourself or accept your life with Harriet Beecher Stowe and company.

Once I did that, I installed a screensaver program and loaded my e-reader with anthropomorphic images, a picture of a Nintendo console, and the cover of Hitchhiker’s Guide to the Galaxy (the one described in the books, not the Douglas Adams book itself). Now it makes me happy to see my screensavers! Sometimes I turn my device off and on just to flip through them 🙂