I flew to Utah knowing next to nothing about Utah. It looks like flat, purple, six-sided blob on the map, so I was surprised by how beautiful and not purple it was. Did you know they have mountains in Utah? Lots and lots of mountains? As I have proven in the past, I have no clue where mountains are. I would never have made it as a pioneer.

I flew to Utah to visit my friend Jen and meet two other blogger friends/clients, Rachel and Kalyn. Utah is evidently blogger central. Some highlights: 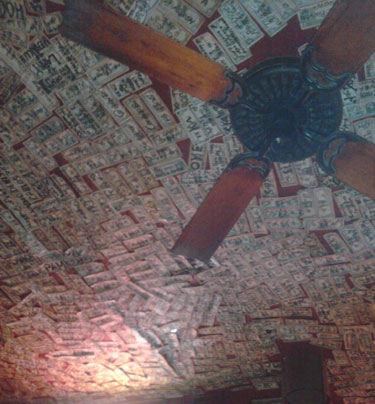 According to the bartender, whose daughter has the exact same birthday as me down to the year (They check ID!), the first dollar on the ceiling was from a regular going off to war. He gave it to them so he could still drink if he was ever broke. A dollar was a lot of money back then. Anyway, the soldier came back from the war shell-shocked and eventually they put the dollar up in honor of him. After that they started putting more dollars up to memorialize other people, and now the ceiling has a zillion of George Washington’s eyes staring down at you. At least they don’t blink. That would be creepy.

I couldn’t go to Salt Lake City without checking out the Mormons. My Mormon friend took me to the official visitor’s center next to the temple, which is where I encountered this dude praying to a big Jesus statue in an atrium: 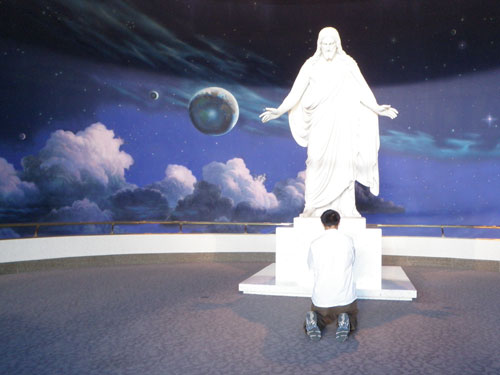 My Mormon friend was careful to take me aside and whisper, “He’s not one of us!” I think she was rather embarrassed. Mormons don’t pray to statues, so we don’t know what this guy’s deal was. 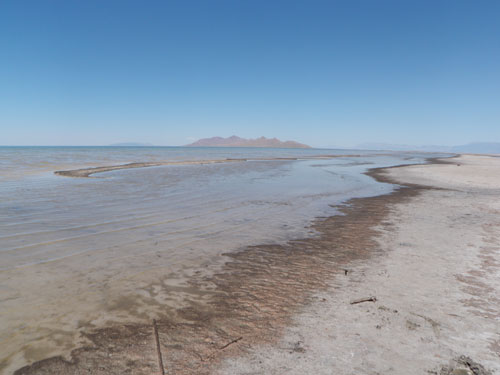 We had to crawl over a pile of rocks that I nicknamed “The Ankle-Breakers” to get to the salt lake. Then on the way back we saw a much more convenient and less treacherous dirt path that was only a few yards away. While I’m glad I got to see the salt lake, it’s not a place I want to visit ever, ever again. It stank and it was rank. Oh, and there are brine flies. Hundreds and hundreds of brine flies. 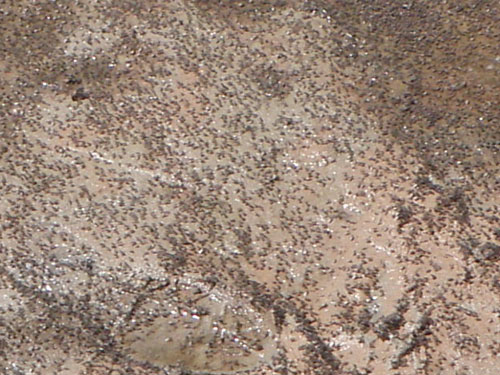 You see all those dark spots in the photo above? They look like they’re just dark sand particles, but no, they’re swarms of brine flies. I’d never heard of a brine fly until I looked down and saw them swarming around my feet and I FREAKED THE FUCK OUT. I looked exactly like Pig Pen in the Peanuts cartoons. I went tearing away from the lake immediately, peeling off more and more flies as I fast-walked the other way.

We also drove down to the marina to get a better look at the lake. It didn’t have brine flies, but the rocks around the edge of the marina were the home to dozens and dozens of spiders. Nasty looking spiders. Big spiders. I’m pretty sure they were evil. They probably eat the brine flies, which was the only good thing I could say about them. 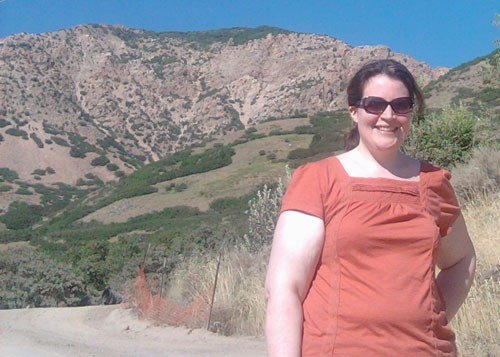 So, after the terror of the salt lake, I went on a hike with Jen and her dogs. However, I was not used to the altitude and I haven’t been able to walk as much lately because of my tendonitis, so I ended up panting as much as the dogs. If I hadn’t brought a bottle of water, I probably would have lapped at the stream with them too. On the bright side, my foot didn’t hurt afterward so I think those orthotics are really working. 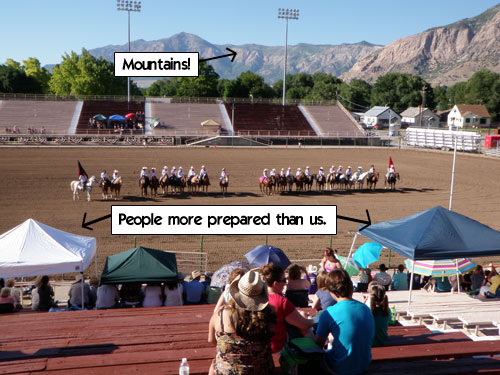 Jen also took me to a Jamboree which was supposed to start at 5, but didn’t actually start until 6, so we got really good seats. No wait, we didn’t. We were obviously newbies to the jamboree scene since we were the only people without big tents or umbrellas to block the sun. Nor did we have coolers of water or sunscreen. Fortunately we sat in the one halfway shaded area of the stands next to a family of people who had attended jamborees before and explained what was going on to us city folk.

The jamboree was a competition between eight horse-riding groups of adolescents. They got to show off their horsemanship skills in various ways. This included balancing golf balls on spoons, fetching water back and forth across the girls, and making tight turns in a keyhole pattern chalked out on the ground. There was presumably something involving barrels too, but we left before that because we were hungry and didn’t want to buy three-dollar hot dogs. During the entire event they played patriotic music and country songs, until one moment when “Poker Face” by Lady Gaga came on. She really is everywhere, isn’t she?

This had nothing at all to do with Salt Lake City and everything to do with my friends’ desire to play with explosives. Every year they have a fireworks party where you have to build a centerpiece based on a theme, which you blow up. This year’s theme was “The World.” Here was my creation: 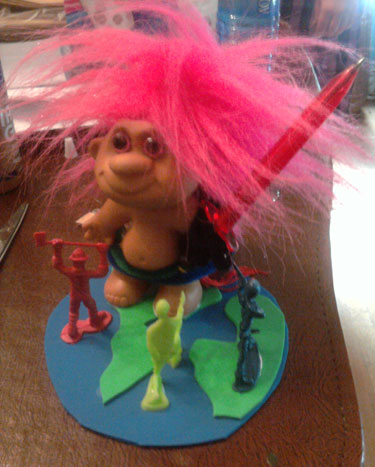 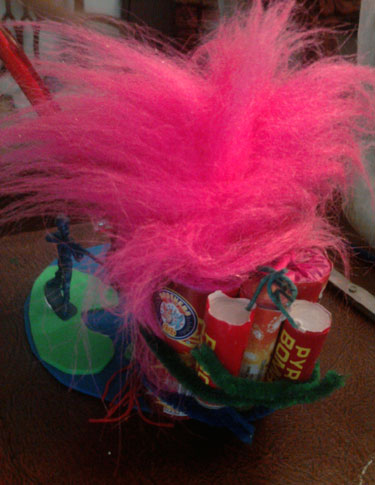 It depicts a troll trying to conquer the world. The green army men are doing a valiant job trying to protect the earth, but the only way to truly eliminate this pink-haired menace is by lighting the fireworks strapped to his back. I’m so fancy, my centerpiece had a narrative! There were several other cool creations, some of which involved creepy clown heads. This made me wonder what you’re actually supposed to do with creepy clown heads and why anyone was selling them in the first place. 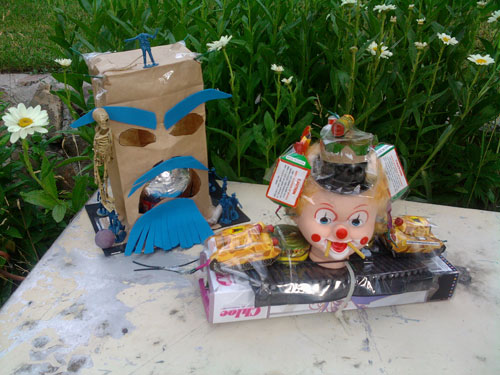 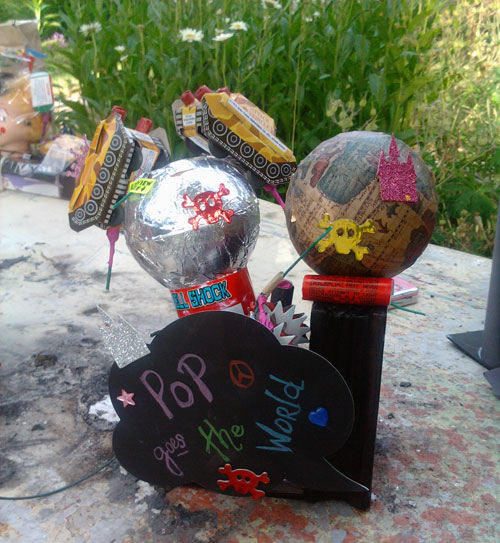 The lighting of the fireworks was both thrilling and terrifying. I kept far back from the explosives, but that didn’t stop one from shooting up in the air…and then down onto the patio beside me. I ran away, and though I don’t remember this, I evidently elbowed Jen out of the way as I was fleeing. It was my survival instinct, not my desire to throw my friends under the fallout, I swear.

The second most thrilling moment came when Jetpack Barbie made a hairpin turn onto the roof and nearly set the house on fire. Thank goodness the roof wasn’t flammable. Barbie, however, is still up there. As soon as we find Firewoman Barbie and a ladder, someone will fetch her, I’m sure. 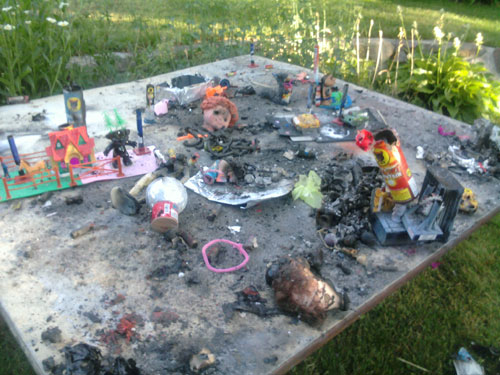 So, a good time was had by all! Utah, you were surprisingly fun and gorgeous, like a fantastic blind date. I wouldn’t mind seeing you again.