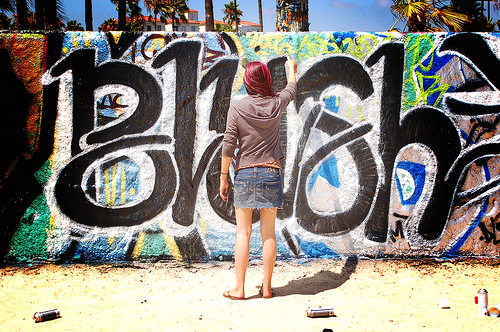 I come from splotchy people.

I’ve always been flattered when people compliment my skin. (I grow it myself!) I was unaware I had good skin until several people told me I did, so I will take their word for it. However, the problem with this pale complexion is that it also came with the tendency to turn red and splotchy in these situations:

I get it from my Mom’s side of the family, and it affects my brothers too. When my Mom sewed her wedding dress she purposely designed it so her upper chest was covered because that gets splotchy too. (Let’s also give my mom props for her mad sewing skillz. It’s a lost art, people.) Usually an attack of the splotches is just embarrassing for me, but sometimes it gets so bad that the people around me want to call 911, shove antihistamines down my throat, or grab an EpiPen because they think I’m having an allergic reaction. That’s not an exaggeration.

The fact that patches of my face become red and not my whole face makes it seem more like the sign of a medical emergency. Last year I went to a raw food restaurant with a few friends, and we were chatting and chewing and slowly people started giving me strange looks. Finally someone asked if I was ok, and I said, “Yeah, I’m fine. Why are you asking?” To which someone replied, “You’re head has been replaced with a GIANT TOMATO!” I told them I was fine and sometimes I just get splotchy, but they are my friends and they didn’t want me to keel over dead during lunch, which would have been really bad press for the restaurant and certainly would have ruined everyone’s appetites. So someone gave me an antihistamine, which I dutifully swallowed. Then I went to the restroom to see what they were overreacting about and when I looked in the mirror I was like, “OMG my head has been replaced with a GIANT TOMATO!” And I finally understood why they were freaking out.

I blamed the red-faced, raw food incident on some sort of allergy to whatever I ate, but honestly I think it happened because I was really tired, hungry and had to wait 45 minutes for a meal which was waaaaay smaller than I’d anticipated. All those factors swirled together in a stress tornado which triggered by faux sunburn.

My splotchy face was triggered again a year later with the same group of friends after I drank a shot of bubble-gum flavored vodka. I don’t drink much, but when alcohol is flavored like candy I will happily step up to the bar, and then turn the color of bubble-gum. And again, they freaked out, but I avoided taking an antihistamine that time. I should probably carry a MedicAlert bracelet that says, “Sometimes I get splotchy. Don’t freak out.”

Another time I was at my neurologist’s and he said, “Got some sun, did you?” in that great accent he has. I did not know how to reply to this until he told me my face was all red. Then he ordered an autoimmune blood test for me because even doctors are freaked out by my face. He wanted to make sure it wasn’t the side effect of some illness because he was really thorough like that. I’m also fairly certain the headache preventative medicine I take makes me more prone to outbreaks because they’ve been more frequent in the past few years.

The red face also appears in social situations where I might be even a little stressed out. I had a friend over to my apartment a few years ago and all we did was watch TV and still the red face appeared. And two days ago I was talking to my paleobiologist bagpiper neighbor who likes Star Wars (I ain’t making that up because I am not that creative) about splitting my wireless internet bill with him if I gave him my network pass code. After he left I went to the bathroom and saw that my face was totally splotchy, so he probably thinks I have the pox or something, which is too bad because I kinda’ dug him, which is probably why I got splotchy. I probably shouldn’t date a neighbor anyway because if it goes bad one of us would have to move, or I’d have to adapt an ingenious disguise every time I came or went from my apartment.

After the incident with my neighbor I realized I will probably break out into the splotches during my “Design 101” presentation at FitBloggin’ this weekend. So now I need to make a note in my PowerPoint slides to tell people not to freak out when their speaker is replaced with a talking tomato halfway through the session. If not, I fear I will slowly notice more and more faces adopt expressions of concern while I talk about the evils of autoplaying music. On the positive side, this might also allow me to fake a fit and collapse on stage if I sense the presentation is not going well.

Anyway, I don’t know if there’s much that I can do about this other than do those breathing exercises my behavioral psychologist taught me and try not to freak the hell out. I remember hearing about some sort of surgery where they can sever a nerve which is supposed to fix the problem of chronic blushing, but that seems rather severe and I hate to undergo surgery unless it’s really necessary. (Or if it will give me perfect vision.)

So, if you ever see me and it looks like a monkey applied blush on my face in the dark, don’t freak out and please don’t call 911 (unless I faint).

Later: By land or by air? (Definitely not by sea)
Earlier: Welcome to JenFul!
Home: Main blog index