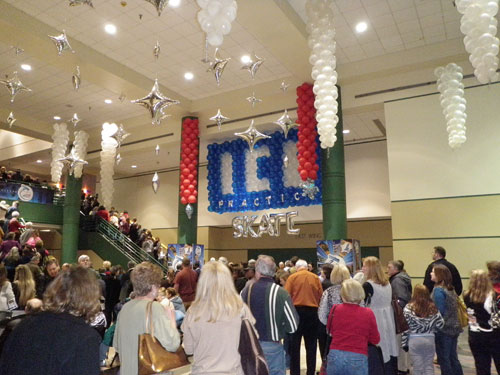 Last November I saw a TV ad for the National Figure Skating Championships being held in Greensboro, NC in January. Being highly susceptible to advertising and sequins, I bought a ticket to the Skating Spectacular. That’s the exhibition held after the competition where the skaters get to have fun and dance to music with lyrics. I drive an hour to Greensboro all the time to see my headache doctor, so it was no big deal. And I already knew where to pick up a Cheerwine slushie on the way out of town. 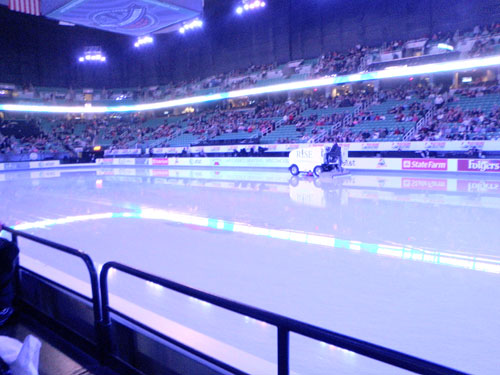 I got my ticket early, so I scored awesome seats in the second row, right behind an Alka-Seltzer Plus ad. (That’s not why this photo looks like it’s from Picasso’s blue period. That was just the low lighting.) The lady sitting next to me thought they were horrible seats and started to complain about how the stadium sucked and her hotel was too far away, whah, whah, whah. This made me realize that your attitude affects 90% of how you perceive life. I thought they were great seats and I was stoked. Complainy Bitchmonster decided she was going to be miserable and whined all the way home.

Thankfully, I was then distracted by the Zamboni, and mildly tempted to hop on board to escape my seatmate. 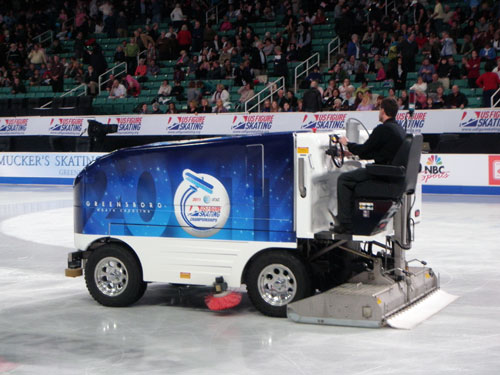 I’ve never seen an ice skating event in person, so it was cool to see how high the skaters actually jump, how they move around the rink, and how fast the spins look outside of a TV’s 30 scan lines per minute. It was great to have actual depth perception instead of a flat 2D image. The oddest thing was to be watching an ice skating event without hearing Scott Hamilton’s voice in my head during the whole thing. I had no idea if skaters were doing double-axels or sit spins or twizzles. People jumped all spinny like, that’s all I know. I did spot the NBC commentators on their own special platform, though we didn’t get to hear them. I guess you have to pay for cable for that. They also glowed because they are saintly, or because TV lights can melt plastic. 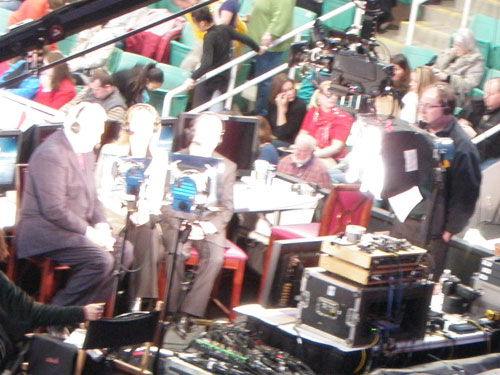 I liked seeing the little sweeper girls skate around the rink after each performance picking up stuffed bears, roses and…frisbees? Uh, ok. I bet that job is SUCH A BIG DEAL to those girls, because it sure would be to me. They remind me of the ball boys at tennis matches. They have this rather simple, yet highly public job, which would probably make me freak out and accidentally decapitate a teddy bear with my skate on national television. They did a good job, and no one fell on there faces or their asses. 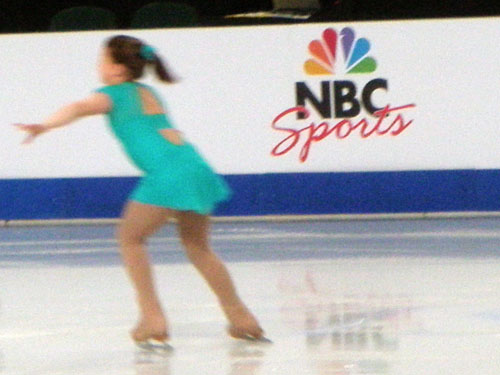 I also got to see a few performances that are probably cut out of the national broadcast, like the synchronized skating team. I did not know synchronized skating teams exist. It was like watching a marching band on ice. (Has anyone done a marching band on ice, yet? If not, it was totally my idea first!) I played flute in marching band Freshman year, and I still remember feeling totally inept at staying in formation. So, way to go girls! They also did a spinning pinwheel, which makes me wonder if the girls in the middle ever go really fast if they’re pissed at the girls at the very end so they’ll go whipping into the walls. 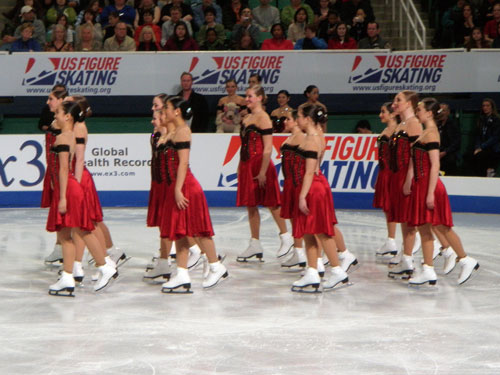 My favorite skater of the night was Jeremy Abbott, who surprisingly finished 4th. He must have lost a skate or knocked over a judge during competition because he was awesome. He did a routine with a hat, which easily could have been cheesy. Yet he did lots of creative things with it and had the stage presence to pull the whole thing off. The kid put on his hat while doing a jump, so the dude’s got skills. I hope he’s not underage, because I’m not ready to be a dirty old woman.

One guy pulled off this cool move where he was skating like a snowboarder who jumps in the air and grabs their board. Except he was on the ice the whole time, crouched down balancing in a way I would have thought impossible. He must be a lot of fun in a conga line. There was also a little girl who did a routine to the Glee mashup version of Rhiannon’s “Umbrella” and “Singing in the Rain” which I enjoyed. Another girl went into a spin, and holy shit, she was spinning like a hand mixer. Hand that girl some eggs, she’ll make you an omelet right on the ice. She became a human blur. I don’t know how she didn’t fall over dizzy after that. Speaking of blurs, here’s Evan Lysacek aka The Flash: 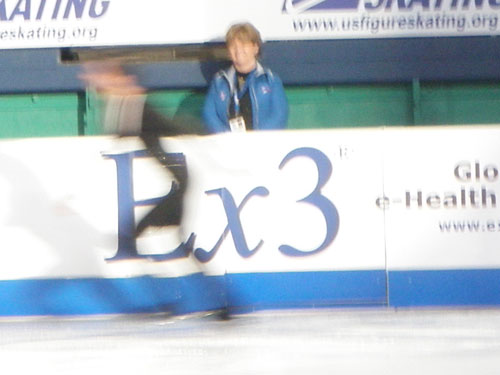 Yes, he moves so fast he is a human blur! Or, I had my camera on a low shutter speed to accommodate the low lighting. One or the other. Evan won the Olympic gold medal last year, so he wasn’t competing. He just came to show us how it’s done. It was quietly thrilling to know I was watching one of the best skaters in the world perform right in front of me. There are literally only a dozen or so people in the world at this moment who can perform at his level. The sound guy evidently isn’t one of them because he started off Evan’s performance with the wrong music! I think Evan got a kick out of if though, and after a short delay he skated his performance.

At the very end of the show, all the skaters came out for one last bow. Then they started grabbing t-shirts, stuffed animals, and frisbees from a table and threw them at us, which is only fair since they have to dodge that stuff all the time. It was rather funny to watch skaters hurling things because they’d glide backwards suddenly, demonstrating Newton’s law that every action has an equal and opposite reaction. I managed to catch a frisbee, and not just any frisbee… 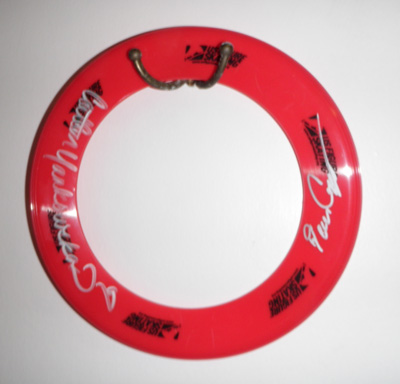 This frisbee is signed by John Coughlin and Caitlin Yankowskas who won the gold medal in the pairs competition! I am the owner of honest-to-God ice skating memorabilia! It was totally worth the ticket price.