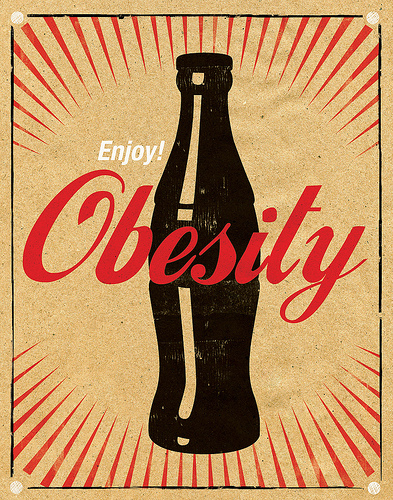 I’ve been reading The Pain Chronicles by Melanie Thernstrom, a well-researched and fascinating book about pain viewed through the filters of history, literature, science, religion and the author’s personal experiences. Of particular interest to me was the idea that disease is sometimes seen as metaphor. For example, a common 19th century belief about consumption (a.k.a. tuberculosis) was that it was a “spiritualizing struggle between the body and the soul, in which mortal flesh was slowly consumed in a way that heightened both beauty and creativity.” This view seems sort of silly now that we know tuberculosis is caused by mycobacterium tuberculosis. Similarly, cancer was once seen as a sign of repression, and HIV was originally viewed as punishment for homosexuality, both of which have similarly been proven false after the mechanisms of the disease were discovered.

This is when it occurred to me that obesity is still seen as a disease of metaphor.

Obese people have been assigned many traits by mainstream culture. They’re weak-willed. They’re lazy. They don’t care about their bodies. They’re disgusting. The popular belief is that obesity is an expression of these poor character traits. Unfortunately, the cause of obesity is not so simple. In the last few decades it was discovered that hormones like leptin and ghrelin modulate hunger. Someone with an imbalance of these hormones will be driven to eat more than a regular person. A pilot study by the Vanderbilt Addiction Center revealed that fMRI scans of obese people showed “greater activation in response to food cues in key regions of the brain, including the insular region, the hippocampal gyrus region, and the orbitofrontal cortex.” This suggests that obese people may battle strong biological impulses to eat that naturally skinny people don’t. Other studies have shown that a diet of high-calorie foods trigger addiction-like responses in the brain and affect dopamine levels, making it more difficult for people who eat these foods to change their diets. And Brian Wansink’s food lab research has revealed that simple things like the size of your plate or bag of popcorn influence how much you’ll eat in a sitting.

All of these findings suggest that obesity is more complicated than simply lacking will power. There is undoubtedly some personal choice involved, but it is comparable to the amount of a choice a clinically depressed person has to pursue treatment. Depressed people cannot simply “cheer up.” They can take medications, exercise to stimulate endorphins, eat a diet that provides nutrients that help battle their disease, and maintain a support system of family and friends. However, they still have to fight their natural brain chemistry, and even if they do everything right they may still fall prey victim to depressive episodes that make them consider suicide or stay in bed all day.

Similarly, obese people can eat a healthy diet, exercise regularly, weigh themselves frequently, and attend support groups such as Overeaters Anonymous or Weight Watchers. But many of them still have to fight brain chemistry and societal pressures that drive them to eat more calories than they will burn.

It is unlikely that obesity will escape its perception as a metaphor until its mechanisms have been decoded and a “cure” developed that shows the public that obesity is not just an illness of character. Currently the most affective cure against obesity is gastric bypass surgery, which is commonly viewed by the public as “cheating” and “taking the easy way out.” Though if you know anything about the surgery, it is hard to see what is easy about dumping syndrome, possible hair loss, extreme pain after overeating, and the risk of complications such as abscesses, leaks in the digestive track or death. Perhaps if there were a more socially acceptable treatment for this disease, such as a vaccine, a series of injections, or a pill, the treatment would not be viewed with the same amount of scorn as the disease.

Until obesity is better understood by the public, it will likely remain a disease of metaphor. It doesn’t help that obese people are typically regarded as unattractive, and thus deemed worthy of ill regard. In a much more extreme way, diseases such as leprosy similarly made outcasts of their sufferers. Of course, once obesity is better understood, it is also more likely that there will be a cure, thus allowing those who are overweight to escape the persecution that their weight would have brought upon them. Such a reprieve is of little consolation to those today who are discriminated against or taunted because of their size. The one consolation they can take is that it’s likely that future generations will look back on the current views of obesity with incredulity and view obesity as the complicated state it is, not an illness of metaphor.

I’m aware that this post has a serious, term-paper like tone that isn’t exactly similar to my more humorous posts. I dunno why that happened. That’s just how it came out when I wrote it, so I decided to go with it.