“Today is going down as a huge turning point in my life,” my mother told me recently.

“Oh, why?” I asked hesitantly, trying to remember if today was her wedding anniversary, divorce anniversary or some other anniversary. 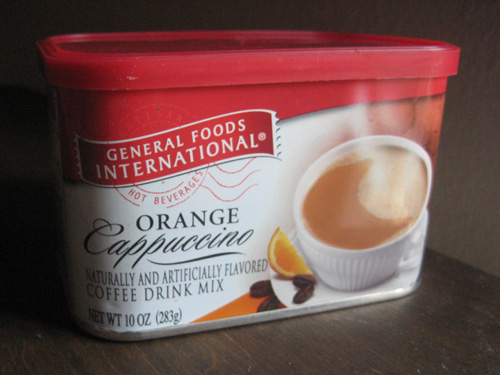 I cannot remember a time in my life when my mother did not drink the General Foods International Orange Cappuccino. There was always one or two of the small rectangular tins on our kitchen counter, one full of the instant coffee mix and one containing drained grease. The tins were metal and wouldn’t melt when hot liquid grease was poured into them after cooking.

I wish they would warn people before discontinuing a line of food. Then people could stock up and buy several cases in preparation of the loss of their favorite foods. Oh well! Farewell, Orange Cappuccino, I shall miss seeing your tins on my mother’s kitchen counter.

Later: A day in the life of chronic illness
Earlier: George Clooney and a loose girl
Home: Main blog index