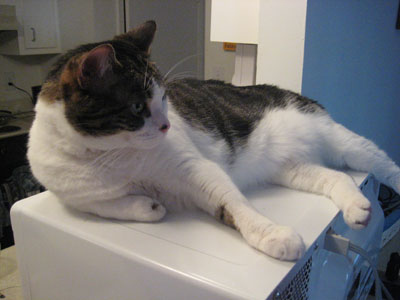 Sometimes at night, a minute or two after I’ve turned off all the lights and climbed into bed, I hear a sad mewing coming from the hallway. It is not the happy meow I get when I come home or the demanding meow when Krupke swipes my nose to demand food. It’s that sad, lost child, meow.

When I go out into the hallway to see if Krupke needs something, I turn on the lights to find him holding the feather toy in his mouth which is attached to a piece of string and a plastic wand. He’s also kneading his front legs back and forth. When he sees me he’ll stop meowing, pause for a moment, and then run the other way as I approach, either under a table or behind the couch.

I’ve tried picking him up and taking him back to my bedroom, but then he just skedaddles the other way. I’ve tried just talking to him in the dark from my bedroom when the meowing starts. This usually silences him for a moment before he starts up again. I’ve tried turning the light back on without getting out of bed, which usually silences him for a moment. Then he might wander into the bedroom and then turn around. I’ve tried taking the wand toy out of his mouth and waving it around to play, but that doesn’t interest him either.

I have absolutely no idea why Krupke behaves in this neurotic manner. He’s done it for over a year now, before we moved to a new apartment and before Java Bean came to live with us. He does it if I’ve left my bedroom door open or closed. I do not know what is going on in his furry little brain when he’s sadly meowing and kneading the carpet, but it makes me sad to think he wants something and I don’t know what it is. Are there any cat psychologists out there who might have a clue what’s going through my furry little baby’s head?

Later: Do not ride the Megabus (triple exclamation point extremely necessary)!!!
Earlier: Coming to bookstores (in 2010?) – Chocolate and Vicodin: And Other Failed Cures for the Headache that Wouldn’t Go Away
Home: Main blog index