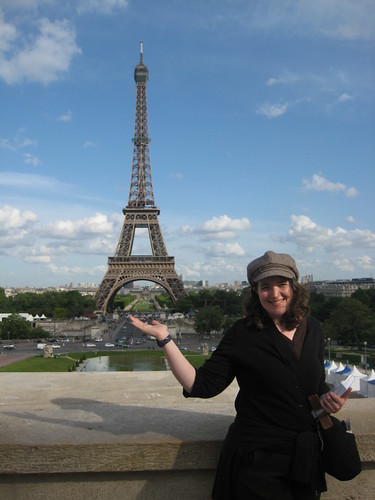 I think my next book shall be called, “The European Vacation Diet,” in which you eat whatever chocolate coated crepe or croissant you want without remorse because you are climbing to the top of Sacre-Coeur first thing in the morning. Warning: Here be stairs. Lots and lots of stairs. 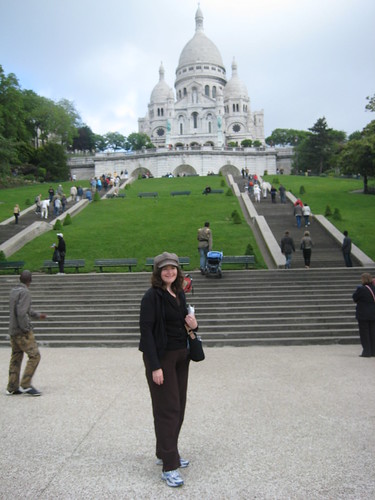 On my final full day in Paris, I finally got the weather I had been expecting. I walked under warm and sunny skies with my jacket tied tight around my waist and not pulled tight against my body. In Paris, I got the rainy weather I was expecting in Britain, whereas London failed to produce any significant amount of Heather Nova’s London Rain.

I woke up when I wanted to and not at a time dictated by museum openings. Then I had a leisurely breakfast at the cafe on the corner where I had a delicious coffee and this Omelet Nature: 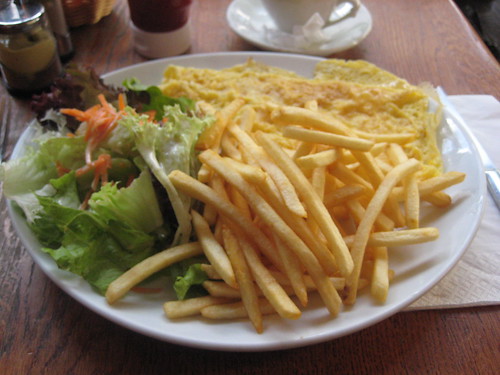 I’m sorry to tell my fellow Americans that I did indeed eat the whole thing, plus the three small pieces of bread not pictured. I have done nothing to disprove the stereotype of Americans as gluttonous pigs, but I needed the energy for all the walking and stair climbing I had planned that day.

I entered the Metro to discover that my pass no longer worked and that holding up the entrance really annoys the person behind you. I’m not sure if I bought the wrong pass or if it got demagnetized, but it meant I had to go buy some more tickets. I stared at the lone ticket machine in the corner of the subway, unsure of how to make my selection after touching the screen didn’t work. Then the man behind me showed me how to roll the cylinder at the bottom up and down to make my choice. (And they say the French are rude.) I got my ticket and rode to Sacre-Coeur, a Catholic Church at the top of a hill in the Montemarte district of Paris. 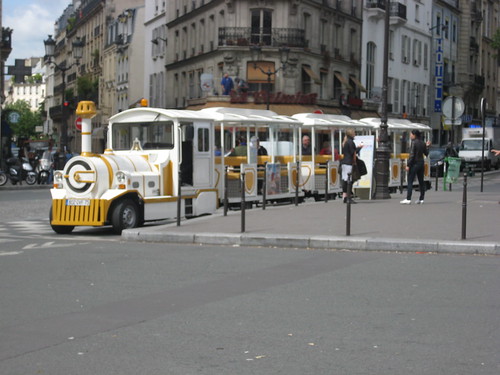 There is a cute little train called the funicular that you can ride to the top, but that requires a Metro ticket and I didn’t want to go through that nonsense again, so I pretended I couldn’t hear my knees screaming and my cartilage whining as I hiked up the hill past people trying to sell me friendship bracelets.

The view was spectacular, particularly on a clear day like this. I toured the inside of the church and rubbed the foot of St. Pete’s statue for luck. Then I exited and moseyed around the cobblestone streets and steeps hills of Montmartre. It’s a quaint, Bohemian district of France where many famous and not-so-famous artists lived and still hang out. I wondered by Toulouse-Lautrec’s old house, past the building Vincent Van Gough lived in for two years, all the way down to the Moulin Rouge. I passed a bakery on the way where I stopped for a praline tart. If the line outside the store was this long, it had to be good. (And it was!) 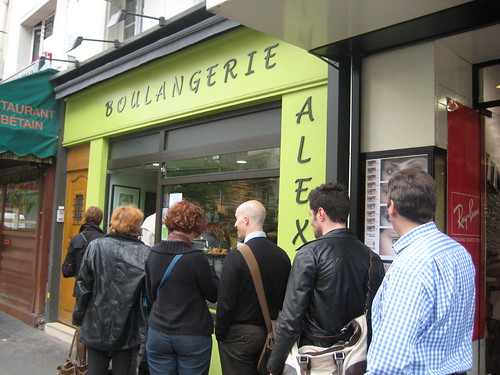 I sat down and looked over my Rick Steves’ guidebook that mapped out my walk to make sure I hadn’t missed anything, and whoops, I had walked right by the cafe featured in the movie Amelie. That’s one of my favorite movies, so I backtracked a block up the street to take a look and there it was! 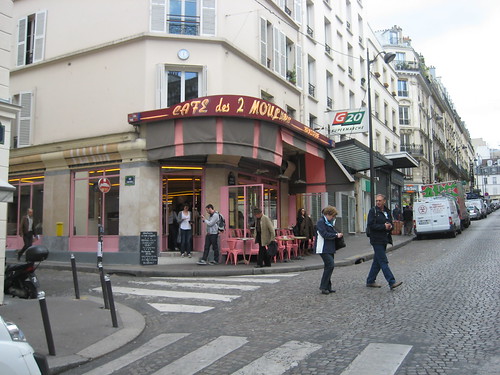 For lunch, I bought a Nutella Panini from a street vendor. Yes, I had a chocolate sandwich for lunch, and it was good. They are crazy about Nutella in Paris. There were jars and jars of it on display on every street vendor’s cart. Montemarte is a good place to grab some grub because there was a wide selection of delicious-looking eateries open. I walked through the red light district, gawking at the items on display at the Erotic Museum, got back on the Metro and headed for the Bastille. On the way, my insulin levels dropped suddenly from the chocolate sandwich or eight days of sightseeing and I felt like taking a nap. I sat on the stairs of the Opera Bastille instead and watched the people go by until I felt strong enough to stroll down the Promenade Plantee. 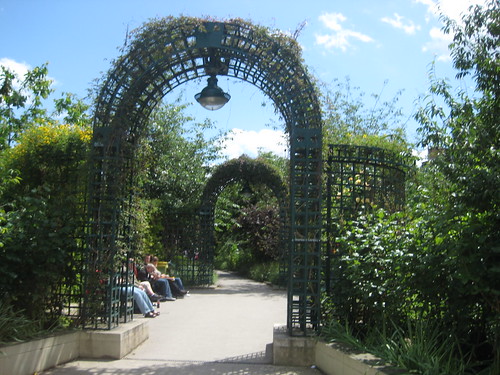 Much like the trail that runs by my apartment, this is a long, narrow, linear park built on an old railway viaduct. I sat on a bench for awhile, recovering my energy, and musing about the graffiti problem in Paris. 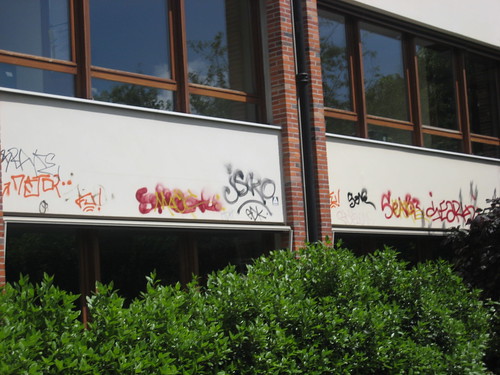 Then I was off again, doing the Rick Steves’ guided walk through the Marais district, an older part of town built on a swamp (or in French, a “marais”). It’s a bourgeois neighborhood with lots of shops. There is a Jewish district that was falafel central. I also strolled through the gay district to the Pompidou modern art museum, though I didn’t have time to go inside. I popped into a hat shop, hoping to buy a souvenir, but all the hats were either too expensive or wouldn’t cram into my suitcase well. I bought a cute little kitty change purse instead to house all my 1 Euro and 2 Euro coins. 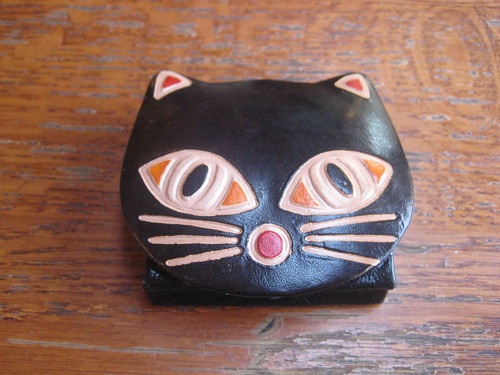 I continued walking past Les Forum des Halles again and past the Louvre and half the Tuileries to Angelina’s, a salon where I’d been instructed to try the hot chocolate. I’d walked approximately 5 miles that day, so I took a rest break halfway down the Louvre to sit on the sidewalk. Hey, it works for the beggars! Sadly, no one threw me any Euros.

I met friend of a friend, Elizabeth, at Angelina’s who greeted me with two cheek kisses like the French do. She also got us a great table by the window by insisting politely, which is a technique I will have to steal from her. The hot chocolate was indeed scrumptious, like drinking a chocolate bar. 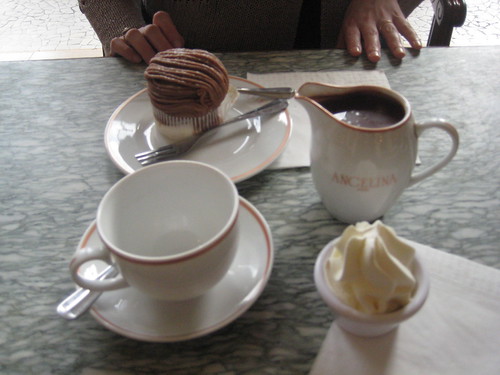 After I cheek-kissed Elizabeth good-bye, I dashed off to my final sight to see: The Eiffel Tower. You didn’t think I’d do Paris without stopping by this landmark, did you? I made my way under its four feet, trying to sort out where to buy tickets, when suddenly a mob of people started running towards me. It must be a hoard of rabid PastaQueen fans! I love you too, my darlings! No, wait, it seems they’ve just opened the east tower’s ticket booth. I’m standing right by the east tower! Quick, run! So I ran to the ticket line and waited all of two minutes to buy a ticket before I rode the elevator to the second floor. This totally made up for all that time I wasted looking for the tourism bureau on the first day. Then there was a short line for the elevator to the very top and then I was looking down on Paris from up high. 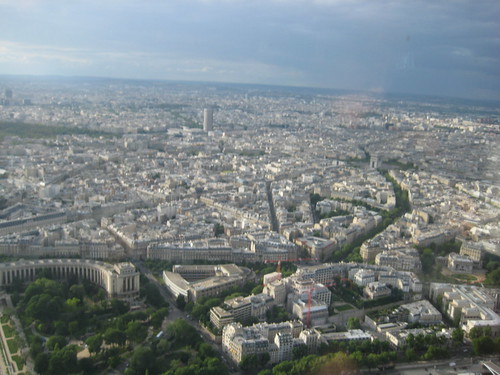 I love how the city is sketched with white pastels on the canvas of the land. I gazed at the buildings and the people and the trees, without any of the torrid winds I had expected at the tippy top. Then I ate an overpriced sandwich from the cafe and made my way down to the second and first levels of the tower as well. The first floor was practically deserted. I watched a film collage there of movies that featured the Eiffel Tower. I thought about staying another two hours to see the light show that happens at the top of every hour at night, but the good weather drifted off to another country and rain started pouring down between the beams of the tower. I scurried down the staircase, which was faster than the elevator and headed for the Metro, happy to know I could now say, “I’ll always have Paris.”