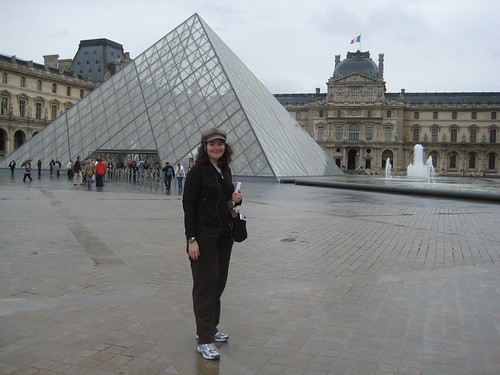 It was raining and the sun was trapped behind a blockade of grey clouds, but I was in Paris, damn it, and I was going to walk the Champs-Elysees. I only had a hat and a water-resistant jacket, but at least this statue knew how to dress for Paris weather. 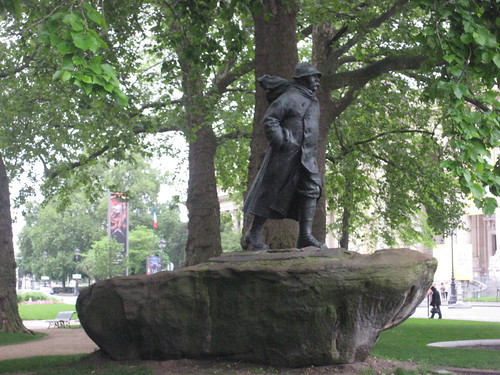 My two-day museum pass would expire tomorrow, so I declared museum mania on Sunday. I’d planned on waking at seven o’clock to finish my walk down the Champs-Elysees, through the Tuileries, and directly into the Louvre as it was opening at nine o’clock, but once again my body had other plans. I dragged myself out of bed by eight and had the hotel breakfast again because it was quick and easy, but swore I’d hit a patissiere for some pain au chocolat tomorrow.

Several runners jogged past me as I walked by the obelisk at Place de la Concorde and through the green gardens of the Tuileries. These people were running past famous landmarks in sweat shorts like it’s no big deal! There is so much grandeur and history and postcard material littered around Paris that it seems odd for people to be going about their mundane lives here like people in cities not mentioned in guidebooks.

On my boat tour the first night in Paris, the guide pointed to the large former palace on the river bank and said, “This is the Louvre.” Then the Louvre kept going and going and going and going. It is the largest building I can recall seeing and has more art than I’ll ever be able to see. This is why I downloaded another free Rick Steves audio tour and just hit the highlights like the Venus De Milo, Winged Victory, and the Mona Lisa. The only snag came when I discovered that the first room mentioned in the tour was closed, leaving me lost yet again trying to find room two. I wandered by ancient statuary and Chinese tourists and eventually ended up in the right place.

When I have visited museums before, my brain reaches information overload after about an hour and I leave without seeing many sections of the museum. Having the guide gave me the endurance to hit more sections by only visiting the highlights. Getting the background information on why each piece of art is considered as grrrrrrreat as a box of Frosted Flakes made the visit more memorable and meaningful even reflecting on it a few days later.

People always say that the Mona Lisa is smaller than you expect. So many people have told me this that I entered her gallery thinking I would see a postcard size image. Yet when I saw a portrait the size of a small poster smiling behind the glass, I was probably the only person in the room thinking, “Wow, that’s bigger than I expected!”

After I exposed myself to all that culture, I sat on the Pont des Arts waiting for Francine, my lunch date for the afternoon. As I watched for someone wearing a black cap, a middle-aged man sat down next to me and after a minute asked me something in French, which turned out to be, “What time is it?” He also spoke English, so we then talked about the “situation,” meaning the economy, good things to see in Paris, and he told the peddler trying to sell us a fake gold ring to go away. Finally, I saw a woman in a black hat approach and told this musician and geologist who was named Christophe, “Au revoir.” I greeted the woman in the black hat who looked at me strangely before I heard my name called from 20 feet away and turned to see the real Francine, also wearing a black cap which is evidently popular in Paris these days.

Francine is a friend of a friend who moved to Paris after meeting and marrying a Frenchman. We talked about the French philosophy of working to live, not living to work, and the seven nine weeks of vacation time she gets each year. She speaks French and took care of ordering this creamy, culinary orgasm on a plate for me at a crepe restaurant. 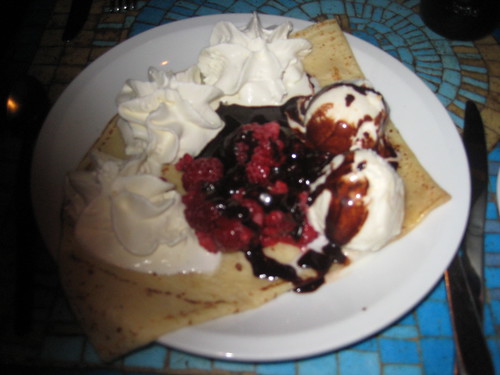 Before I came to France, I was told most people here speak English, which they do, so I barely brushed up on my French because I didn’t see the point. I thought speaking in English here would be great, but instead every conversation makes me feel like a jackass who visited a country without having the respect to learn the residents’ language. Not being able to communicate well makes me feel vulnerable. I sometimes get the wrong food delivered to me. I get the wrong type of tickets from the metro office. It’s all a jumble and I can understand why babies cry a lot because it’s unbelievably frustrating not to be able to properly tell someone what you want. Water, food and shelter are basic human needs, but let’s add language to that list too.

Francine also led me through the curvy back streets of Paris to Laduree, the best place in the world to buy macaroons. We don’t really have anything like macaroons in America. The closest comparison I can think of is an Oreo cookie, but that’s not even close. Macaroons have a crunchy crust and gooey insides. I tasted chocolate, mint, coconut, and blackcurrant, all of which were yum.

Francine pointed me towards the Orsay, which picks up in the period of art where the Louvre drops off. The building used to be a train station and is quite easily the coolest museum building I have ever been in. 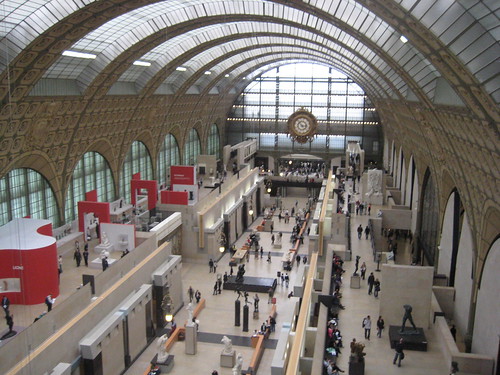 My museum pass once again paid for itself when I skipped a massive line for tickets and went straight to the security check. I could walk into the Indianapolis Museum of Art with a can of spray paint in my purse, but in Paris they are serious about their art museum security. There was much to love at the Orsay, including the model of Paris hiding beneath a glass floor, the large clock faces on the sides of the building, and the way the frosted panel in front of the 5 stairs of escalators lets enough light in for you to see the shadows of all the visitors walking back and forth.

Once I’d sucked up all the beauty my eyes could take at the Orsay, I waited for a bus to the Rodin museum for 10 minutes before walking there myself. My feet were beginning to get sore, but I had now become accustomed to this feeling since it was the sixth day in a row that I’d pounded them with sidewalks and sightseeing. Besides, pain and I are old buddies. It’s my really annoying friend who never goes away. I’ve learned to work around its quirks and habits to live how I want to, which today involved seeing some famous sculptures.

At this point, I was beginning to lose my steam, yet I made it all around Rodin’s old mansion and gardens looking at the art he freed from marble. The man was busy. There were a lot of rooms full of rocks. It really makes you think. 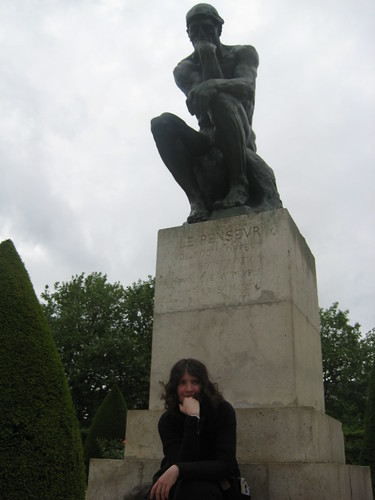 I dragged myself to the Metro and returned briefly to my hotel, happy to know I’d gotten about 60 euros worth of admissions for the price of 32, plus no waiting! Then it was off to Canal St. Martin, a recently gentrified section of the city, not known to many tourists. No one here was trying to sell me a miniature Eiffel tower. This was a more authentic Paris, a place where parents took their kids in the evenings to race on their razor scooters and play soccer in the parks sandwiched between the two lanes of roads. I walked only two blocks before coming upon the sounds of drums and this: 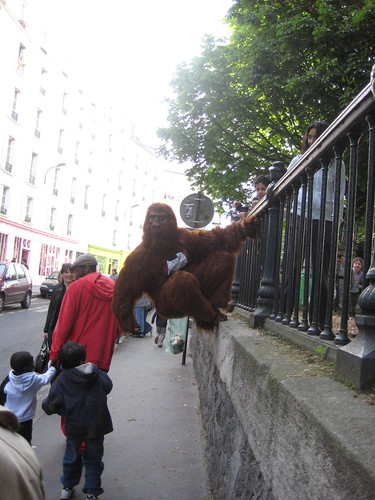 An orangutan? He or she was with friends: a penguin, a polar bear, and about 20 drummers sounding out a rhythm and drawing a crowd to them like the pied piper as they slowly marched down the street. Soon we ran into some people with a sousaphone playing in a square next to some mimes. Yes! Real live French mimes! And no, they weren’t funny! 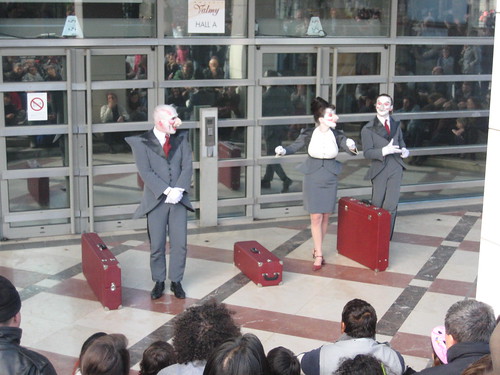 I had stumbled upon Le Priotemps des Rues, which was quite a lark. I left only to eat dinner at a nearby restaurant. On the way I saw a man wearing shirt that resembled the Starbucks logo, only it said “Starfucks here” and I wondered if he could get away with wearing that in America. Probably.

Then it was back to the hotel once more to vege out in front of an episode of The Mentalist dubbed in German and Cinema Paradiso subtitled in French before turning off the TV and turning in for the night.