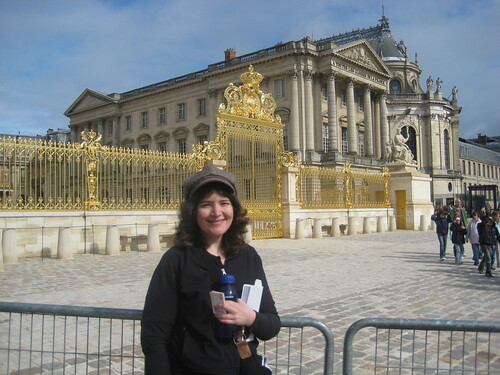 I wasn’t sure why the train started playing accordion music on the way to Versailles, but on the ride back I figured it out when I saw a busker hop on at one stop and play us some tunes before collecting tips and hopping off at the next stop. He must hit a lot of trains a day and the man was just an example of how many more buskers and beggars I’ve seen in Paris than London. Twice at tourist spots I’ve had a woman come up to me with a card and ask, “English?” The first time I said yes and was presented with a card begging for money, but the second time I was all like, “Je ne pas parle anglais.” Some of the beggars sit on the streets with cute little sleeping dogs which they probably keep to increase tips. 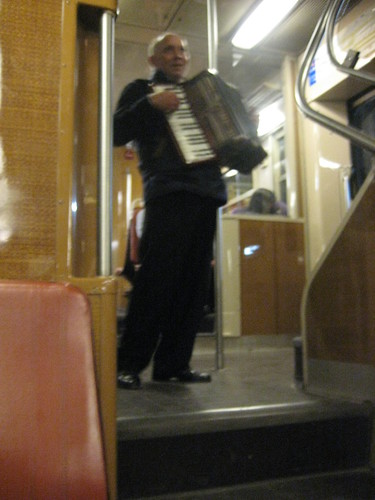 I wanted to arrive at Versailles, the ornate palace of Louis XiV, right when it opened at nine o’clock to avoid the crowds. My body had different plans and I didn’t crawl out of bed until 8:20, probably because I lost an hour in the time change between London and Paris. I ate breakfast at the hotel because it was quick and convenient. When I filled my coffee cup I noticed yet again that Europeans use real sugar and real milk, not any of the artificial sweeteners and light creamers that you find in America. The sugar even comes in cute little cubes which I delighted in plopping into my coffee and stirring away.

I bought a special RER train ticket to Versailles, but I think I hopped on the wrong train at first, so I hopped off at the next stop and felt better when I hopped on a train that said “Vick” on the front, meaning it was going to Versailles. I read up about the place on the 30-minute ride, got off at the station, and made the 10-minute walk to the palace, arriving at about ten o’clock. I was glad I had my museum pass because I got to skip the lengthy ticket line pictured here in the distance. 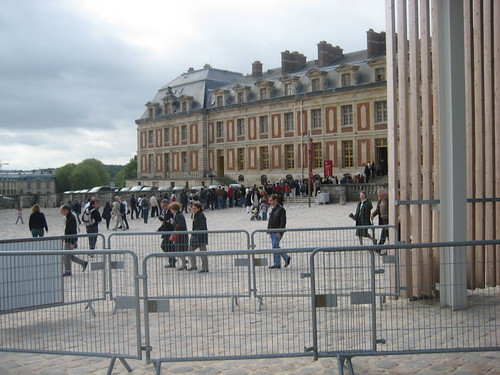 Once I was inside, I put on my headphones and let the Rick Steves audio tour guide me since it was free off the Internet and not 5 euros like the audio guides for sale at the information desk. His audio guides consist of Rick reading his guidebook chapter aloud, but listening to it is a better experience than walking from room to room with your nose stuck in a book. It frees your eyes for looking. It helped to have the book because the pictures helped me find the right room to go to.

All I can say of Versailles is that it is incredibly ornate and will make even a four bedroom house look like a cramped studio apartment. The gardens make you glad you aren’t in charge of mowing the lawn and trimming the topiaries. They are usually free, but I went on the weekend when the fountains were on so I had to pay a fee, but it was worth it. 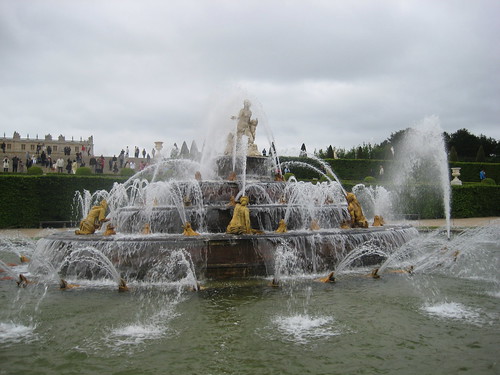 I only went as far as the Apollo fountain, but the grounds extend even farther to another house. However, the sky was becoming overcast and I had things back in Paris I wanted to see before closing time, so I hiked and hiked and hiked back up the lawn and only got slightly lost in the bushes.

I got on the train back to Paris and got off without ever passing through a turnstile demanding my ticket, which means I could have bought the one-way ticket and saved myself half the fee since the Paris Metro doesn’t seem to mind if I ride for free. There have been two other times I have entered Metro stations and similarly found open turnstiles, which makes me wonder how much money the department of transportation lose every year and if that is why they can’t afford to clean the graffiti off the trains. On the train back I was again confronted by someone who wanted something, this time a guy with a petition I refused to sign because I wasn’t sure if it was really for more handicapped accessible laws or was something that would get me in trouble. I actually had to get up and move seats to get him to go away. 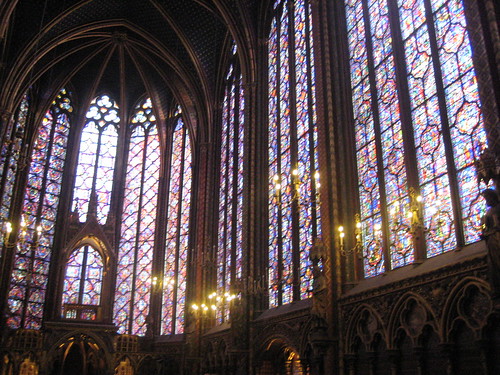 Sainte-Chapelle was next, a church whose walls are mostly stained glass. It must be absolutely brilliant on a sunny day, but even as rain clouds threatened to close in, it was gorgeous to behold. After visiting Notre Dame, I was expecting it to be bigger, but it was by no means a small church. Like a leggy woman, the ceilings went up forever.

I exited Sainte-Chapelle and stopped in the Conciergerie which is next door. This was a prison where they held prisoners before beheading them, such as Marie Antoinette and Louis XVI. After seeing the splendor of Versailles and Sainte-Chapelle, the plain walls and arches of the Conciergerie were a stark contrast. I also found myself a bit imprisoned when I couldn’t find the exit and looped through the second floor display twice. 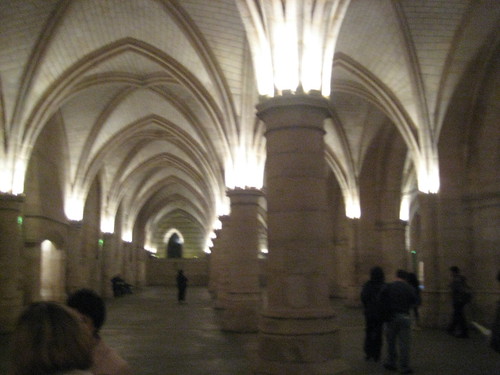 I wondered over to Notre Dame because my museum pass includes a tour of the tower, but the line looked rather long and I wasn’t sure I wanted to climb that many stairs, especially considering my next stop. I took the Metro to the Arc De Triomphe and collected another mandatory tourist photo. Visit Paris and collect them all! 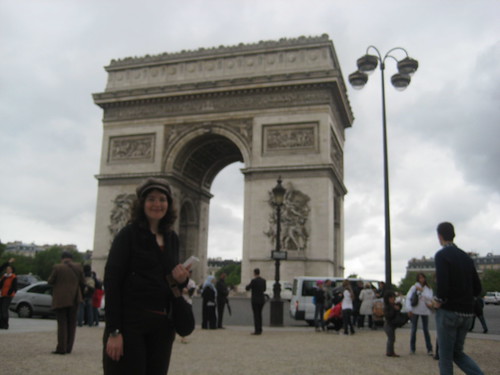 I am depending on the kindness of other tourists to get these photos, but it is remarkable how varying their photography skills are. Some people take 3 shots and go into crouches to get the best angle. Then there was the girl who cut off half the Arc in her photo of me and thought nothing of it. 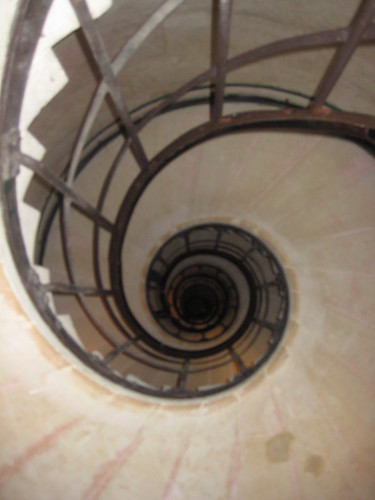 I paused to catch my breath twice, but managed to make it to the top. There are two floors beneath the top which hold sweet, sweet, cushioned benches and exhibits about the arc, including a camera view of everyone standing below you. 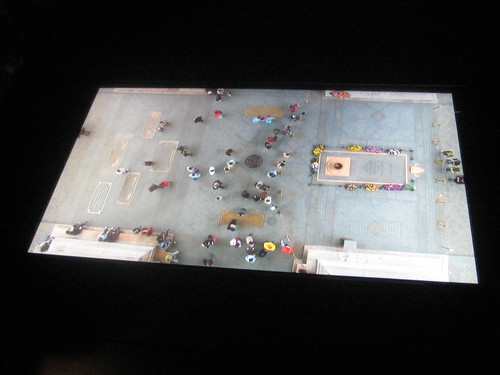 It finally started to drizzle once I stepped onto the top of the tower, so I could not see as far as I would on a clear day, but the view was still spectacular. 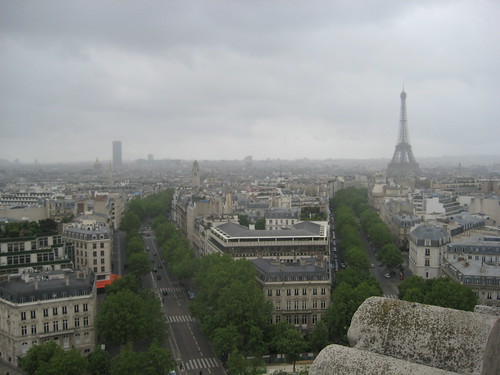 The stairs looked a lot more appealing on the way down than the way up. Once I reached the bottom, the rain had momentarily stopped, so I started to stroll down the Champs-Elysees, a main thoroughfare that is the home to cinemas, shops and restaurants. I walked past Gucci, Peugeot’s car dealership, and too many famous storefronts to mention. I popped into Laduree for a few minutes since they are considered the place to buy macaroons. However, the line was long and so cramped that I was practically licking my neighbor, so I went back onto the street and decided I’d get macaroons later instead of getting claustrophobia now.

I stopped into a Monoprix to buy a salad and some prune yogurt, but forgot to buy a plastic spoon, so I ended up using my finger, which worked surprisingly well. I sat down on a bench next to a middle-aged French man because it was the only spot and he suddenly started talking me up. I was tired and not in the mood for conversation and when he asked if I was traveling alone I decided to travel two benches down instead. My paranoia tells me I saved myself from being sold into an Albanian prostitution ring.

Then the humidity broke 100% and the rain started to come down again. I had made it halfway down the street to Rond-Point, a traffic circle where the shops end. My feet hurt. I was tired. So I decided I would finish my walk tomorrow and descended into the closest Metro stop and headed back to my hotel. I rested my feet, but my stomach was moaning, so I headed out onto the street and in the hopes of finding something familiar to me I entered a McDonalds. I ordered a McFlurry and was elated to discover they have Kit Kat toppings in France. I sucked down the creamy deliciousness as I watched some French television. Word games like Password are no fun to watch when you don’t understand the language. I felt a bit guilty for sitting in my room and wasting any moment I was in Paris, but I also knew I needed to rest and take a break so I could be fully awake to enjoy my trip and not sleepwalk through the tourist sites. I settled into BBC and CNN until finally turning off the lights and turning in for the night.