The chiming church bells heard from my room, which I originally thought would be annoying, are quite handy for telling the time. Ding, ding, ding, ding, ding. It’s five o’clock! So this is how people managed before watches. I climbed down from my bunk without stepping on my bunkmates, who are two lively girls from Amsterdam that I met yesterday when putting away my things. They invited me out with them yesterday evening, but I turned them down because I am not a clubber and never will be. It was nice having the offer though, and in some parallel dimension PastaQueen is blogging about her crazy night out on the town with two Dutch girls.

Instead, I grabbed some grub in the hostel kitchen where the oatmeal was surprisingly delicious. I was expecting it to be crap, but it was a figgy, raisin-y bowl of goodness. Last night I heard two men in the hostel common room talking about how prices go up the closer you get to the river. This point was proven when it started to drizzle as I left the building and discovered that the umbrellas near St. Pail’s cost 16 pounds and the ones near Leicester Square were only 6 pounds. I spent 0 pounds because I brought my hat. That’s why I call it a smart hat.

I slowly circled in on the TKTS booth in Leicester Square solely to see more of the city and not because I was lost. The booth starts selling half-priced tickets to West End shows at 10am, so I appeared at 8:50am expecting a line of hardcore theatre fiends camped on the sidewalk, but instead was presented with this. 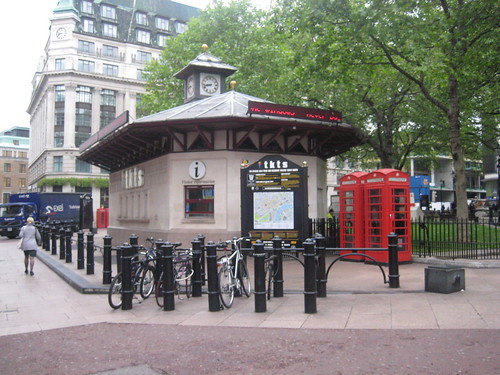 Nada. No one. They didn’t even have the list of shows available up on the board yet. This shocked me, probably because I’ve seen the line in Times Square for half-priced New York theatre tickets. Since I had an hour to kill, I explored the neighborhood, strolling through Picadilly Circus where there is a fountain and a huge LED billboard, down to Trafalgar Square and the National Gallery, and back to where I began. And still, at 9:20am there were only 3 people hanging around the booth, including me. I got in line behind another man, who then left, making me the first person in line! 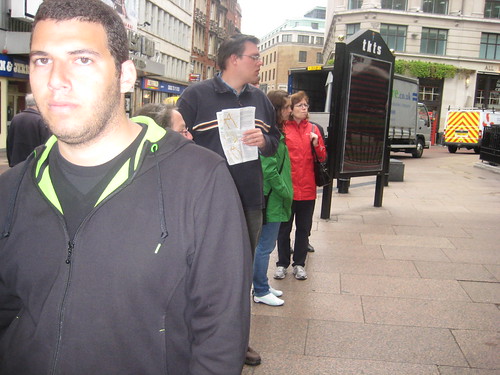 Ok, it was a rather short line, but I was the head of it.

I had been hoping to get tickets to We Will Rock You, a musical featuring the music of Queen, but no tickets were available. Instead I purchased tickets for Spring Awakening because it had won lots of awards and because I liked the way the guy struck a pose on the subway poster ad.

I climbed down into the Underground again and was whisked off to St. Pancras station so I could visit the British Library. In one little room they have the Magna Carter, some DaVinci notebooks, musical scores by Hayden and Mendelssohn, The Gutenberg Bible, and lyrics written by the Beatles. As I was looking at Ravel’s score for Bolero, I overheard a man next to me talking expertly about the history of the piece and all the gossipy details about the composer. I shadowed them down the rest of the music section and learned that Hayden was a good business man and Mendelssohn was kinda homey and didn’t like to perform in public. I think it was Mendelssohn. This was a library after all and I couldn’t hear all of the soft speech he was giving. I don’t know why I didn’t just go up to them and say, “Hey, can I tag along?” but it didn’t occur to me at the time. I’m probably spelling Mendelssohn wrong too, and someone will no doubt snootily correct me in the comments, but I don’t have enough wi-fi minutes to look it up and check. I’m also typing on a cramped keyboard where I accidentally hit the wrong buttons and keep zooming out of my document to 33% by doing something unknown to the touchpad.

My feet were starting to hurt and my stomach was starting to grumble, so I stopped into a pub across the street and ordered a coffee and a tuna and sweetcorn jacket even though I didn’t know what a jacket was. They could have served me tuna and corn on a windbreaker and I would have thought it was a local custom. Instead I learned a jacket is a potato scored into four pieces and opened slightly with the garnish on top. I was also subjected to the most awful cover of Bob Segar’s “We’ve Got Tonight” while eating it. It may in fact be the worst cover of any song I’ve ever heard. 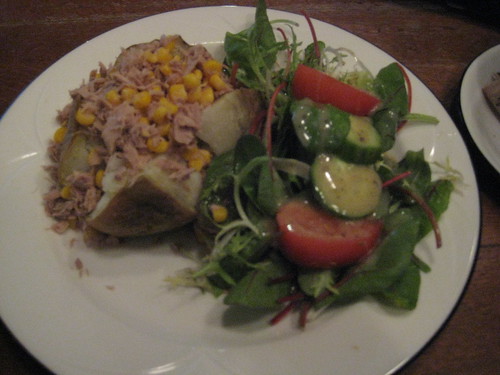 I fled the pub and took the tube to Covent Market, which was AWESOME. I didn’t have this on my original itinerary, but I’m glad I dropped in. Covent Market is a collection of outdoor shops contained under the same roof. They are organized in 4 or 5 rows, with some of the rows being more posh than others. (Oh look, I said “posh.” I am becoming British already.) 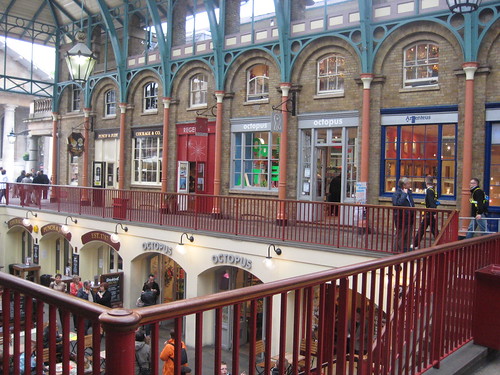 Some vendors have roll-away stalls, and all around there are street performers juggling and singing. There is just about something for everyone, including sweet, delicious cupcakes. 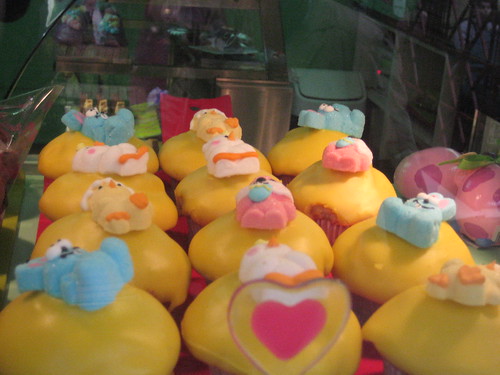 I finished a delectable double-chocolate cupcake with a marshmallow bunny topper on the way back to Leicester Square to meet Courtney, author of The Weight Loss Diaries and a quite fun, friendly and generous gal. She showed me around Chinatown where they have skinned ducks in the window, and she reminded me to get a shot standing in a red British phone booth. 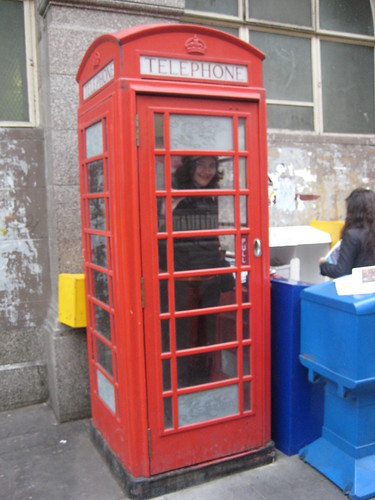 Then we strolled down Bond Street, which has lots of posh shops. (Posh! I did it again!) Then we were walking down Oxford Street and ducked into Selfridges department store to descend into their dungeon of delicious goods. Oh. My. God. Department stores in London have food halls in the basement. This one was a grocery store, bakery, deli, and butcher rolled into one. I wanted to eat my way out of there, stuffing cupcakes and sushi in my face, but I restrained myself since I was still full, which is the only reason I didn’t go to the hot chocolate bar. 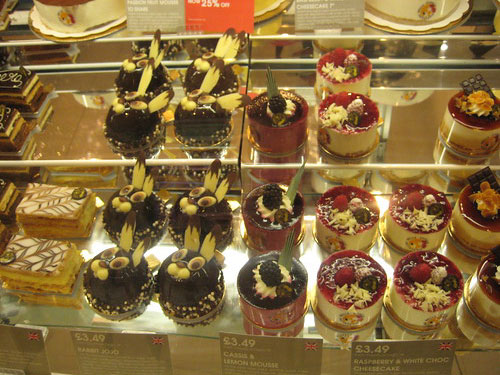 Courtney had an appointment, so we parted ways and I headed toward the Marble Arch at Hyde Park, intending to jump on the tube station there. However, since I was all the way out there, I decided to pop into Hyde Park for a bit. A map on a sign near the corner drew a circle radius around part of the park, stating that everything within it was only a maximum 5 minute walk away.

Let me warn you, the map is a LIE.

The Princess Diana Memorial is just across from the lake. I’ll jaunt over since it’s just 5 minutes. And this is how I found myself wondering around the somewhat unremarkable, cold, and endless fields of Hyde Park, walking and walking and walking and thinking, “Isn’t there supposed to be a fucking lake around here somewhere?” Eventually I happened upon a house, which I believe was the groundskeeper’s building. And onward I walked, my feet aching. Eventually I found a big rock from Norway. 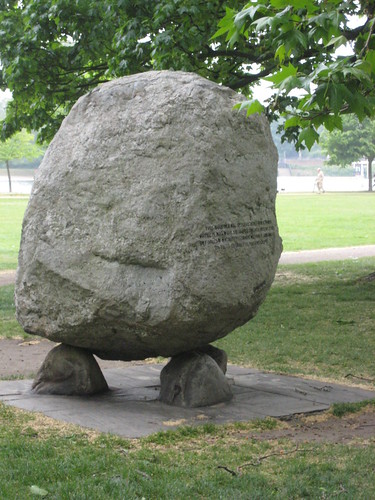 Finally, finally, FINALLY, I crossed a bridge over the lake and found the Princess Diana Memorial, which would have to have been flowing chocolate to be worth the trek. It was not flowing chocolate. Then I trekked onward, farther and farther, seeking a tube station where I could rest my feet. I have never in my life been so grateful to see a subway entrance as I was that afternoon in front of Knightsbridge station.

Then I was back at the hostel, checking e-mail, writing blogs, and then off again to see Spring Awakening where I learned that not only do London theatres let people drink wine and eat popcorn during show, but they also sell Haagen-Daas ice cream during intermission.

I know. Let’s all get a flat there and move in together.

I was at the Novello Theatre which is laid out rather oddly. If you enter on the ground floor of the building and go straight ahead into the first doors you see, you’ll find yourself on the second balcony. To get to the “stalls” or the orchestra floor as we Americans call it, you had to go down three flights of stairs. Then I tried exiting through another door during intermission and found myself in an entirely different stairwell. An usher then pointed me through a tiny door I had to duck my head to enter, which led down a short, narrow passage to another door which opened into the lobby. I felt like Alice in Wonderland walking through secret passages.

The show was pretty good, but it didn’t resonate with me on an emotional level. I don’t feel an urge to go out and buy the soundtrack like I have with other shows. I was in the fourth row center, which was so close I could see all the spittle flying out of the actors mouths as they sang. There was a lot of spittle. I might have needed an umbrella after all. There was also…partial nudity. I saw nipple! It made me uncomfortable.

After the show I walked halfway across the Waterloo Bridge as Courtney had recommended. The city was lit up from the London Eye Ferris Wheel to Big Ben and Westminster Abbey. This is London and those buildings are real and I am here. Then I hopped a bus back to the hostel, which was far more direct than the tube route I’d taken earlier. I rode on the top and zoomed through the streets because London was mine.