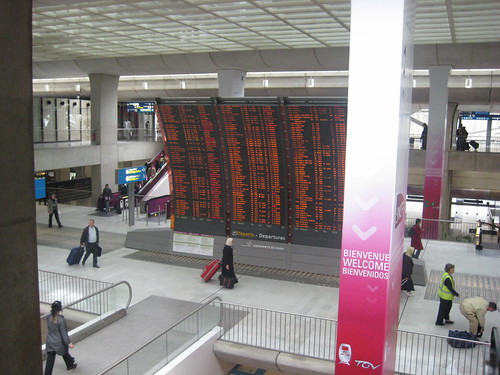 The plane dipped up and then down like the Thunder Run roller coaster at Kentucky Kingdom. I pulled down the arm rest by the empty seat next to me so I could grip it tightly. Whatever happens will happen I told myself as I breathed deeply in and out. You are not driving the plane. You are not creating the winds. It is out of your control. The plane jittered and bounced as it hit the runway. Then it swerved slightly to left and right. If we crash into a ball of flames at the end of the runway, at least I’ll have seen Europe. And then the plane stopped and there was silence broken by the sound of the whole plane applauding. “As you can tell, we have most definitely landed,” the copilot announced over the intercom and finally I breathed out and was relieved to be back on the ground again in the US of A.

Any complaints I might have about spending 21 hours traveling are dampened by the knowledge that 100 years ago such a trip would not have be possible. Instead of riding planes and trains and automobiles, I would have crossed the ocean in a boat. Instead of two days travelling back and forth, I would have spent at least a week on my journey instead of only 20% of my time.

There were other bumps, besides the ones I felt upon “landing.” The French proved they do not understand the concept of coffee-to-go when a barista handed me a steaming drink in a plastic cup without any insulation ring. I was so excited to barely hop on the latest Metro train that I didn’t notice it was the wrong Metro train until the doors had closed. When I did get to the right station, a cute boy on the platform gave me a smile and tried to talk to me in French, but all I could say was, “Where were you four days ago? I would have learned French for you!” before hopping into the railcar. In the line at airport security I suddenly remembered I had a water bottle in my purse and chugged 16 ounces of water in 3 minutes to get through the gates. After I arrived in Chicago, I got lost trying to find the CTA to ride downtown to catch my bus to Indianapolis, proving that I don’t just get lost in international airports but domestic ones too. Once I boarded my bus, after running towards it madly because I had been waiting on the wrong corner, I got an honest-to-God migraine, complete with nausea and unilateral pain on the left side of my head, but only after I’d stowed my luggage under the bus with my abortive medications. Then finally I was back in Indianapolis, dragging my suitcase four blocks to the parking garage, hoping no one from the Wheeler Mission tried to mug me before I got there. Thankfully, my car had not been towed and it started like it was supposed to and I drove back to my apartment.

Upon opening the door and stepping into the living room, I said to the empty space, “Oh right. I live here.” For I had been gone an awfully long time and seen lots of pretty and old things, and had forcibly pushed any thoughts of my “real” life out of my head whenever they tried creeping to my attention. But here I was again and those were my plates in the dish rack and there were my curtains I’d bought at Big Lots and there was my long tube of toothpaste I could not take on the plane. Here was my life just as I had left it. The only thing that seemed out of place was me. The girl stepping in the door was not the exact same girl who left 10 days ago, but she would assimilate soon and take over the life the other girl had left behind. There were bills to pay and emails to respond to and cable internet providers to contact about the lack of service. And there was another trip to plan, perhaps for next year or the year after that, for this continent or another, but undoubtedly there was some place to go because once you’ve been elsewhere it is hard not to return.