Pack light! Pack light! Everyone has told me to pack light and that does not mean I should catch a sun beam in a jar and ferry it across the ocean with me. I have taken these warnings to heart, and disregarding any concern for stinkyness or being caught wearing the same pants twice, I have packed light. Laurie at Crazy Aunt Purl became my light packing hero after I read this post where she traveled to Madrid with two small bags.

It was there I first heard about packing cubes. I was perplexed by Laurie’s statement that she could pack more in her luggage with those little square bags. It seemed illogical because by bringing the cubes she was carrying even more stuff around, but then Rick Steves recommended it too. So I bought some packing cubes that were not technically cubes by the mathematical definition of the term, and what do you know?! They were right! It’s hard to explain why they work, but instead of trying to smoosh a lot of stuff into a big bag, you’re smooshing smaller amounts of stuff into smaller bags. So you get more efficient smooshing. Plus, if you want to grab a sock, you don’t have to upend every item of clothing in your bag to find it and then re-smoosh the whole suitcase again. You just re-smoosh the cube the sock is in. 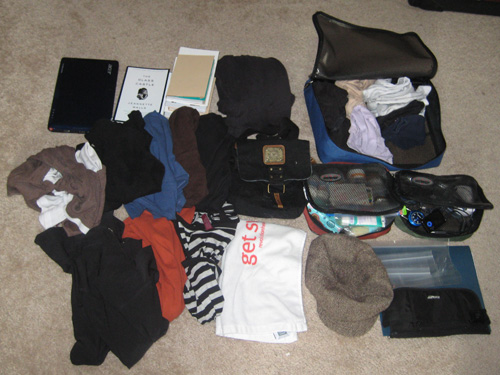 Here is what I’m bringing to Europe, starting from the top left and going clockwise: Baby computer, book for plane (The Glass Castle by Jeannette Walls), tour books concealed in homemade book covers so I’m not a completely obvious tourist, sweat-wicking jacket (good for rain), packing cube with 5 pair of socks and 5 pairs of underwear, a packing cube of toiletries and pills, packing cube of chargers and gadgets, folder containing my itinerary and reservations, money belt, a smart hat, a towel (I’m a hoopy frood who knows where her towel is), two tank tops for sleeping or layering, sweat pants for sleeping or lounging, 1 long-sleeved shirt, black pullover sweater, 3 t-shirts, and a day bag. Not pictured: my wallet, a credit card, a debit card, driver’s license, passport, digital camera, neck pillow for plane, ballet flats if I have to wear fancy shoes somewhere, travel journal, and copies of all my important papers concealed at the bottom of the suitcase. Oh, and some Trader Joe’s almond butter for a friend. 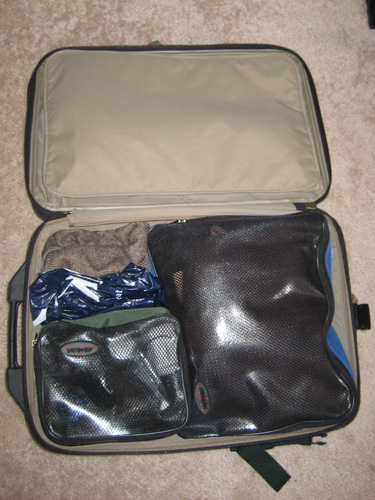 And look! It all fit in the suitcase, which itself fits in the overhead compartment of most airplanes. Plus, there is room in the top portion of the suitcase for souvenirs.

At the beginning of my list was a “baby computer,” which I bought this week for $240. 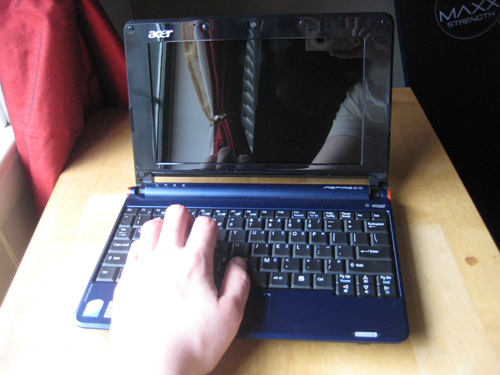 It fits in my daybag and has a wireless card and a webcam, which means I can get online and video chat with people. It also has a media card reader slot so I can easily upload my photos. It does not have a CD or DVD drive. It also doesn’t have that much hard drive space or a super-fast processor, but it gets the job done! I spent Saturday loading it up with all my stuff, so I will be able to blog and twitter on the road. It only weighs 2.5 pounds, and if it gets stolen I won’t cry salty tears over it. Again, I first saw this device mentioned on Crazy Aunt Purl’s site, and my brother mentioned it to me last week, so in the interest of packing light I decided to splurge.

The rest of my day Saturday was spent freaking out that my Internet kept blinking in and out, thanking Whole Foods for their free wi-fi, and completing last minute tasks, like compiling a Europeon playlist for my MP3 player to get me in the mood. It contains:

Warren Zevon – Werewolves of London (There are lot of songs that mention London, eh?)

Anastasia Movie Soundtrack – Paris Holds the Key to Your Heart

Beauty & The Beast – Belle (The opening track where they sing, “Bon Jour” over and over again.)

Jem & The Holograms – Twilight in Paris (from the TV show!)

I’ll be traveling all Sunday and arriving early in the morning London time, which is the middle of the night PastaQueen time. I plan on jumping on a big red bus right away-my circadian rhythm be damned. I’ve researched the hell out of this trip and plan on having a jolly good time! The only real confusion is figuring out what time to take my pills.

Cheerio! I’ll be checking in with you chaps soon, and updating my Flickr stream, or Bob’s my uncle! (And of my 15 aunts and uncles not one of them is named Bob.)